Animal Crossing is not a game that lends itself well to a demo. It's played against a real-time clock, with the game behaving differently at night, in the mornings, on holidays (I guess "I get to play the new Zelda day" doesn't really count), and more. Basically, any time not during the small window I had time to hog a 3DS demo unit all to myself at Nintendo's recent 3DS Software Showcase.

But that drove home some of the immediate improvements that New Leaf brings to the game's first hour of play. It's streamlined significantly, and it gives players some control over their starting town that also helps to smooth things over! Usually this is a laborious process of servitude to Tom Nook and running all over the town doing random tasks, but New Leaf is decidedly different. 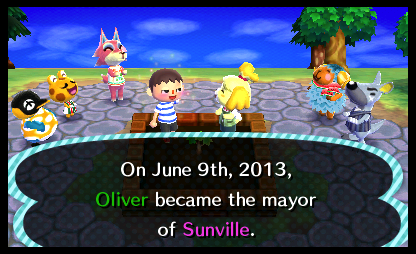 First off, before you even set food in town, you get to choose a town layout. Or rather, choose between a few randomly generated ones. This gives you a modicum of control in the beginning, and also gives you a bit of a say in what town it is because…

Surprise! You're the town's new mayor! There's a welcoming committee for you as soon as you step off the train, and in this you have no choice at all! But despite the responsibilities, all your new neighbors demand of you immediately is for to properly get set up in town (more on that later) and plant a tree! Being mayor may give players a sense of agency in their town, but it doesn't look so far like it'll place them under a burden of responsibility.

However, previous games have always weighted players down with a debt right off the bat, but New Leaf changes that up as well. Mortgages are gone! YAY! Well, not exactly. You're sent to see Nook and he's friendly and cheerful as he informs you not to worry about anything and that he'll just follow you around town until you find the perfect spot anywhere in town to plop down your house. Instantly he sets you up on that spot with a rustic yellow tent and janky thrown-together mailbox, then lets you go without naming a price! "I bet you rarely see a tent with a mailbox right?" says the raccoon as he leaves you to your own devices. 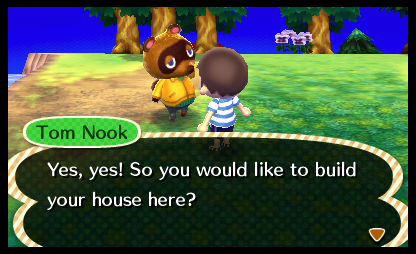 Ah, but here's the rub: it's a tent, not a house. I had Sahara wandering my town, but to her dismay my nomadic digs were not the place for wallpaper or rugs. I returned to Tom Nook's store and he told me that I could easily upgrade to an actual building but it would require a down payment of 10,000 bells first.

"I'm quite a generous raccoon!" he beamed in a self-congratulatory manner, "My heart is about the size of a four-bedroom, two-bath duplex, hm?"

Sure Tom, sure. New Leaf may have removed the psychological negative of having a "mortgage," and Nook no longer immediately conscripts you as a low-wage errand boy, but the raccoon is getting his money, one way or the other. 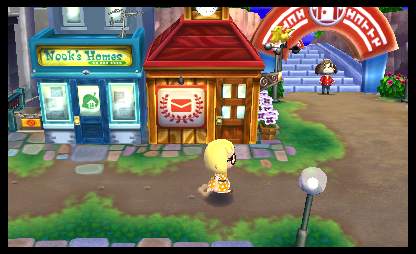 Another negative removed is having to run all over town just to visit different shops. "Main Street" is where all the shops and businesses are conveniently located in a row and it's just across the train tracks. The one-stop-shop is not just a matter of convenience, for some reason the rest of the town felt easier to traverse too. Was it smaller, was I running faster, or was it some subtle psychological effect?

Yet another change in psychological tone were fortune cookies, which seem to have been raffle tickets purchased with 3DS Play Coins (not bells!). The Nookington (run in the beginning by Nook's nephew Tommy) doesn't seem to have a monthly loyalty program like the GameCube version did (thank god, those month-end raffles were stressful when you didn't win!), so these fortune cookies seemed to be the more positive form of unexpected daily winnings to keep you coming back to the shop for more. 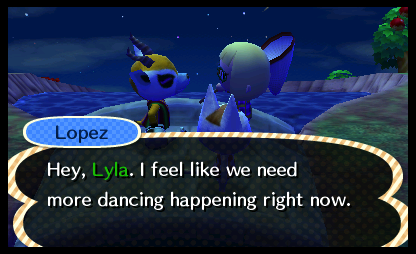 As a side note, the lowest level of the Nookington shop seemed to have a Zelda homage: a shelf in the corner held a couple clay pots that evoked a Wind Waker aesthetic. I'll be sad when I upgrade the shop to carry more and better stock and that graphical touch goes away.

But I'll also be excited to see what comes next. Because even though I had only an hour to play day one of this Animal Crossing, it seems to already be turning over a New Leaf.

These enhancements are tempting me.

It's already tempted me! It will my first AC in the only way to play it, as a handheld game digitally.

In Wild World you can choose a new town map whenever you rebooted the town, I would be interested in actually deciding which way streams flowed (north to south or west to east) and where the beaches and other things were set.
10, 000 Bells is alright, but I hope there is a better way to making lots of bells faster than previous games. How long will we have to be Hobo Mayors?

I loved loved loved the first one... I'm seriously thinking about picking this one up, especially because it's on the 3DS!

I'm having a lot of fun with it so far as one of the early mayors. If you're interested, I post a daily New Leaf blog at http://www.jvgs.net/newleafblog/