Movie number six is all about dreams and wishes.

As it is nearly tradition with the Pokemon series of movies, Jirachi Wish Maker is host to many firsts in the franchise. It is the first Pokemon film to be based off of the third generation of Pokemon, Ruby, Sapphire, and Emerald, and the first movie to feature that anime season’s new companions, May (who is based off of the female trailer in the Game Boy Advance games) and her younger brother Max. It is also the first movie to be released directly to video, skipping theaters completely. Once more, Miramax handled the release of the movie and 4kids took care of the localization. The Japanese release happened on July 19, 2003, while North American fans saw the VHS and DVD release on June 1, 2004.

Jirachi Wish Maker is the third movie in the series to be based off of an event Pokemon that can only be obtained through a special download hosted by Nintendo. The first movie featured Mew, while Pokemon 4ever has Celebi. Jirachi is the third generation’s special Pokemon, a Steel/Psychic type number 385 in the Pokedex listing.  Its behavior is similar to that of Mew and Celebi; young, playful and innocent but filled with power and shrouded in mystery. 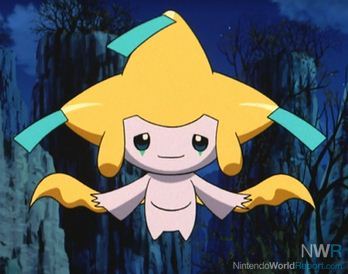 Jirachi as presented in the movie

Jirachi’s trophy in Super Smash Bros. Brawl states the following: “A Wish Pokémon. It's said to awaken for seven days once every thousand years, with the ability to grant any wish asked of it. It is truly a Pokémon of which dreams are made. In combat it uses its wish power to attack. Its attack, Doom Desire, which causes light to rain down from the heavens to do tremendous damage, is especially powerful.”

That’s the basic premise behind the movie.  Every one thousand years, the Millennium Comet adorns the skies of the Pokemon world for seven days. Ash, May, Max, and Brock make their ways towards the Millennium Comet festival, where they witness how the employees set up the tents and attractions. It is there where they meet the Pokémon magician Butler and his assistant Diane. After a magic act gone wrong thanks to the doings of Team Rocket, they become friends. During the turmoil, Max hears the voice of Jirachi, who is encased within a crystal. 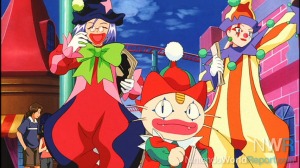 Team Rocket: Clowns through and through

When Jirachi breaks out of the crystal, it and Max become best friends, spending their time together at the festival, while Jirachi is granting wishes to comical effect. Later on, it is revealed that Butler was once a member of Team Magma, an organization first introduced in the Pokemon Game Boy Advance games that are set on capturing Groudon. He proposed a way of creating a Groudon by using a fossil containing its DNA. The experiment goes awry, however, and Butler is forever shamed by the team.

He hopes that with Jirachi’s power in his hands, he can create his own Groudon and finally complete what he set out to do years ago for Team Magma. Eventually, he creates a Groudon by forcefully using Jirachi’s powers. The experiment goes horribly wrong, however, as the Groudon he created is out of control, sucking the life out of the forest and taking many Pokemon along with it.

Jirachi Wish Maker is host to a lot of Pokemon debuts. The most notable of them all is, of course, Groudon. Even though the Groudon seen in the film is a fake and a monster on a rampage, it is a very important Pokemon in the series’ third generation and the mascot for Pokemon Ruby. A Ground-type legendary Pokémon, Groudon is rivals with Kyogre, who is the mascot for Pokemon Sapphire. Team Magma is seeking to obtain this Pokemon in order to create more habitats for Pokemon by lowering the sea level. 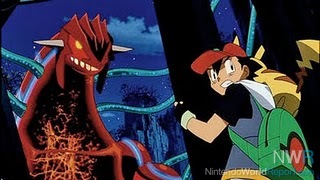 Absol also plays an important role in the plot of the film, being a forest guardian that is trying to prevent a catastrophe and take Jirachi back to Forina, a Valley in the Hoenn region. In Ruby, Sapphire and Emerald Absol is a Dark-type Pokémon, with its Pokédex number being 359.

Each Pokémon movie opens with a prologue detailing the concept behind Pokémon. Jirachi Wish Maker features a brand new prologue that reflects the new Pokémon universe audiences are about to witness. The male Pokemon trainer from the GBA games makes an appearance during this scene. With Ash being the main character across all generations of the Pokemon anime and movie series, the male trainer from the game doesn’t appear often, making this an interesting cameo for fans to notice. The prologue also references past movies, featuring shots of each movie’s main Pokemon. 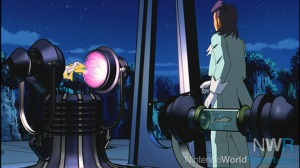 Animation-wise, Jirachi Wish Maker lacks the beautiful scenarios seen in Pokémon Heroes, but it does have a very colorful aesthetic thanks to its festival theme. The attractions are all designed after Pokémon, making it a nice touch that celebrates all things Pokémon. Jirachi Wish Maker features an original song called “A Small Thing”, which serves as the lullaby May sings to both Max and Jirachi throughout the film. The Japanese version is performed by Asuca Hayashi. In the English dub, the Japanese song was combined by the English version and can be heard during the ending credits.

Overall, Jirachi Wish Maker is a pretty good beginning for the third generation of Pokémon. The movie’s connection to astrology makes it an interesting one to see develop, and it even featured many heartwarming moments while not being as melodramatic as the other movies.