Pokémon: The Movie 3 - Spell of the Unown - ENTEI

By the third movie, Andrew's perception of reality was pretty warped too.

Still part of the original series in Japan, the third season in Western countries was retitled to Pokémon: The Johto Journeys, to remind viewers that this was set in an all new region and an all new game. Tracey had left the show to work as an assistant to his idol Professor Oak, and Brock rejoined the main cast due to popular demand.

As this movie takes place, Ash is nearing Goldenrod City for his chance at his third Johto League Gym Badge, and has just caught himself a Shiny Noctowl, the first official appearance of “shiny” Pokémon in the series. Ash has also recently abandoned his strongest Pokémon, Charizard, at a special training valley for wild Charizard so that it may improve its skills.

He, along with his friends Misty and Brock, arrive at the serene village of Greenfield, home of wealthy Professor Spencer Hale; one of Professor Oak's top research students in the past and an old friend of Ash's family.

In the opening scenes, we see Professor Hale playing with his young daughter Molly, and reading to her from a storybook featuring legendary and mythical Pokémon from the Johto region. Whilst pretending to be an Entei (#244) and piggybacking his daughter around the room, Hale soon receives a call from his assistant at an ancient ruin they've been studying. It's revealed that they have been researching the Unown (#201), a mysterious Pokémon that adorns the walls of ancient temples as if they were heiroglyphs, in fact, until generation three of the games it had 26 different forms resembling the letters of the English language.
Professor Hale rushes off to explore a newly discovered area of the ruins, and comes in direct contact with several Unown, who whisk him away to an eerie void between dimensions.

Days later, the vast estate of the professor's has been left to Molly. It's explained that her mother had also disappeared while researching Unown prior to the movie (in the original Japanese version, she couldn't take Spencer's obsession with his Unown research and had walked out on the family), and the little girl is now left alone. In her depression, she rummages through several artifacts retrieved from the ruins her father was exploring, and finds a small container of stone tablets decorated with Unown pictures. She arranges them on the floor and spells out words, which seems to summon real Unown from within the tablets. Reacting to her grief-ridden desire to see her father again, the Unown sense her memory of him acting like an Entei, and use her picture book to materialize a real Entei from their psychic powers.

Molly seems fine with the notion of having an Entei for her father, and to ensure nobody ever comes to take him away again, instructs the Unown to fashion a shell of bizarre crystal formations around her family estate and the surrounding fields. The Unown remain in the center of the house, maintaining the psychic warping of reality. They must have nothing better to do with their time.

Ash enters town just in time to see news crews rushing to the scene of the crystallized wasteland, which is slowly spreading across Greenfield and devouring everything in its path. Ash's mother Delia Ketcham also arrives on the scene along with Professor Oak, concerned for the well being of her friend's young daughter apparently trapped within the fortress. Watching the news report inside, Molly sees Delia and is reminded that she currently lacks a mother of her own, and sends Entei out to kidnap her. Needless to say, Ash protests the abduction of his mother, and when he fails at preventing it, sets out towards the fortress with his friends and their crack team of Pokémon infiltrators. 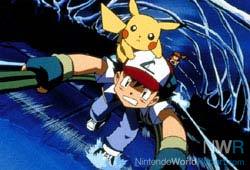 They manage to break into the transformed mansion, and begin exploring the place as Molly is alerted to their presence. Team Rocket appear in their hot air balloon outside the tower, and despite Entei shooting them down, they also slip inside undetected. Realizing the power of altering reality that the Unown give her, Molly creates an adult copy of herself which she sends to greet the imposing trainers.

Brock and Misty both agree to stall and distract her with Pokémon battles while Ash continues on in search of his mother, finally coming across the bedroom where the real Molly sits with her captive.

Extremely stubborn and terrified of being alone again, Molly is distraught at the thought of letting Delia go free, and Entei appears to attack Ash. The trainer's Pokémon are quickly defeated and Ash is thrown from the top of the tower. 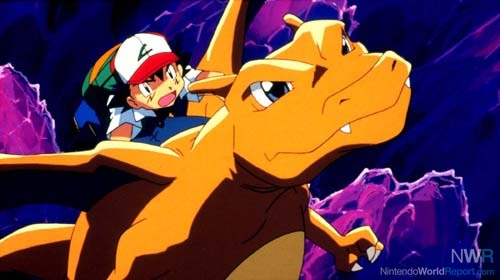 Charizard returns in one of the best moments of the film

Suddenly, Charizard appears with perfect timing and scoops up Ash before he falls to his death. Riding on Charizard's back, Ash and Entei begin round two of their match.
As Delia, Brock, Misty, and the newly arrived Team Rocket watch on in suspense, the battle wages on around the rooftop of the fortress until Charizard is ultimately defeated, and Entei prepares for a fatal strike. Finally the pleas of Ash and his friends get through to Molly and she calls Entei off, agreeing that it's time to end the insanity and return things to real life. However, the Unown have grown quite comfy in their new accommodation and are reluctant to tear down everything they've created. Ash and Entei work together to attack the Unown at the core of their gathering, as the psychic crystals grow out of control, shooting spikes out around the rooms and threatening to take down everything with them. Finally Molly comes to the realization that the Unown are manipulating things based on her own desires and beliefs, as she was the one who summoned them from their slumber in the stone tablets. She seals them back away, sadly accepting that this means Entei will also vanish from existence – but seemingly in thanks for their adventure, the Unown return Spencer to the world of the living.

The crystal formations recede into thin air and the picturesque Greenfield returns to normal. Ash and his family and friends say goodbye to Molly. As the credits begin to roll, Spencer returns home to his delighted daughter, with an additional surprise – her mother has once again joined the family and the three can live together in peace and happiness.

As far as Pokémon movies go, this is one of the more well-written ones, staying almost entirely true to the original Japanese script, and featuring a unique plot that's not spread thick with cheesy morals or entirely unrealistic scenarios – for the Pokémon world, that is. The little girl and her reaction to the situations thrust upon her was believable and emotional.

This was the first movie not to feature a yet “undiscovered” Pokémon, that being, one from an upcoming generation of games. The only legendary to feature in the film was Entei himself.

Entei was one of a trio of three legendary dog Pokémon along with Raikou and Suicune. After being released into the wild in the games, the three would race across the land in a very awkward pattern that required players to track using their Pokédex map system. Furthermore, the three were notorious for immediately fleeing from battle as soon as they were encountered, forcing players to put them to sleep. Future games featured legendaries that acted in this same manner, but Johto was the first time such challenging Pokémon captures were seen.

Pokémon 4ever: Celebi-Voice of the Forest Pokémon: The Movie 2000 - The Power of One