When I booted up Shu on the Nintendo Switch, I wasn’t sure what kind of 2D platformer to expect. I was initially drawn in by the game’s beautiful aesthetics; hand drawn, two dimensional characters set against 3D backgrounds that developer Coatsink Software clearly spent a lot of time on. I would soon find, however, that whatever tranquility may lay in the game’s looks, a tense and challenging platformer lurked underneath its exterior. I mention both Shu’s graphical style and its difficulty because those are the things that stuck out to me the most while I played it, while everything else about the game was pretty ho-hum platforming. 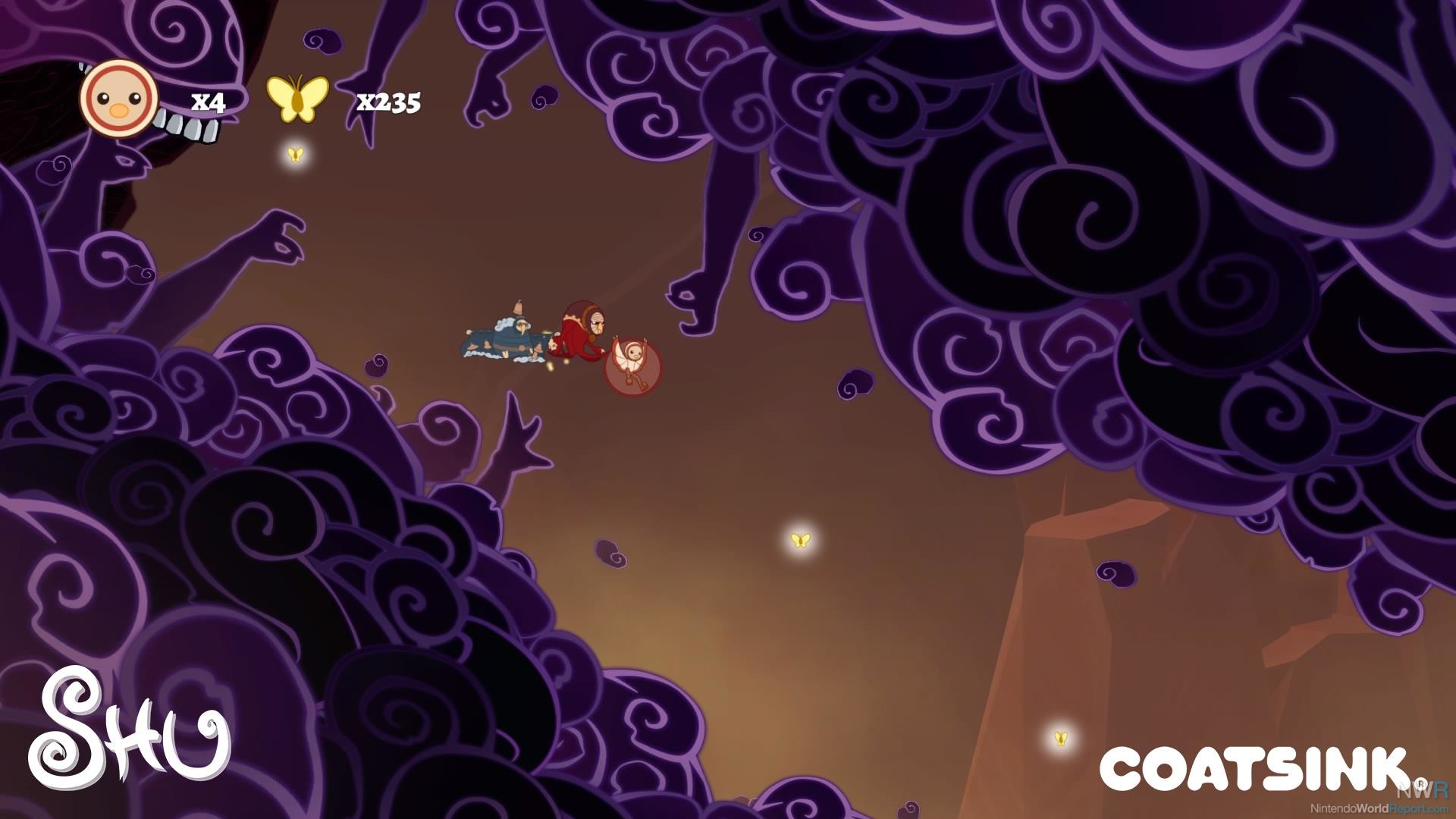 Shu stars an owl-like creature that shares the title’s name. When his village is destroyed by a mysterious dark storm, he must set off to find refuge and a way to repel evil from the land he calls home. The story is fairly basic, but it does enough to set the stage and create stakes for the player to care about. After the opening cut scene, the player is thrown into the first of 21 stages that will test their platforming skills.

Following a simple, three to four level structure for each of the five locations, Shu begins each area by finding two refugees from his village that survived the darkness. Each villager you find grants Shu a new power, which is helpful because all he can really do alone is jump and glide. The villagers provide him with abilities that will help him navigate the environment, as well as avoid the darkness that chases him at certain points in the final level of each area. Giving Shu new powers with each villager was a neat idea, but my biggest issue with it was that these characters are taken away from you after only two or three levels. I never felt like I was able to master their abilities before they were gone, and then I was introduced to two new allies with completely different abilities. The levels are designed around the two abilities you have at the time, which provides interesting challenges to overcome. But in the final area, an incredibly difficult and hectic chase scene ensues where you reunite with each ally you met along the way, only to realize you never spent enough time with them to master their powers. This creates frustration because you have to relearn them again on the fly at the very end of the game, which resulted in a handful of game overs for this reviewer. 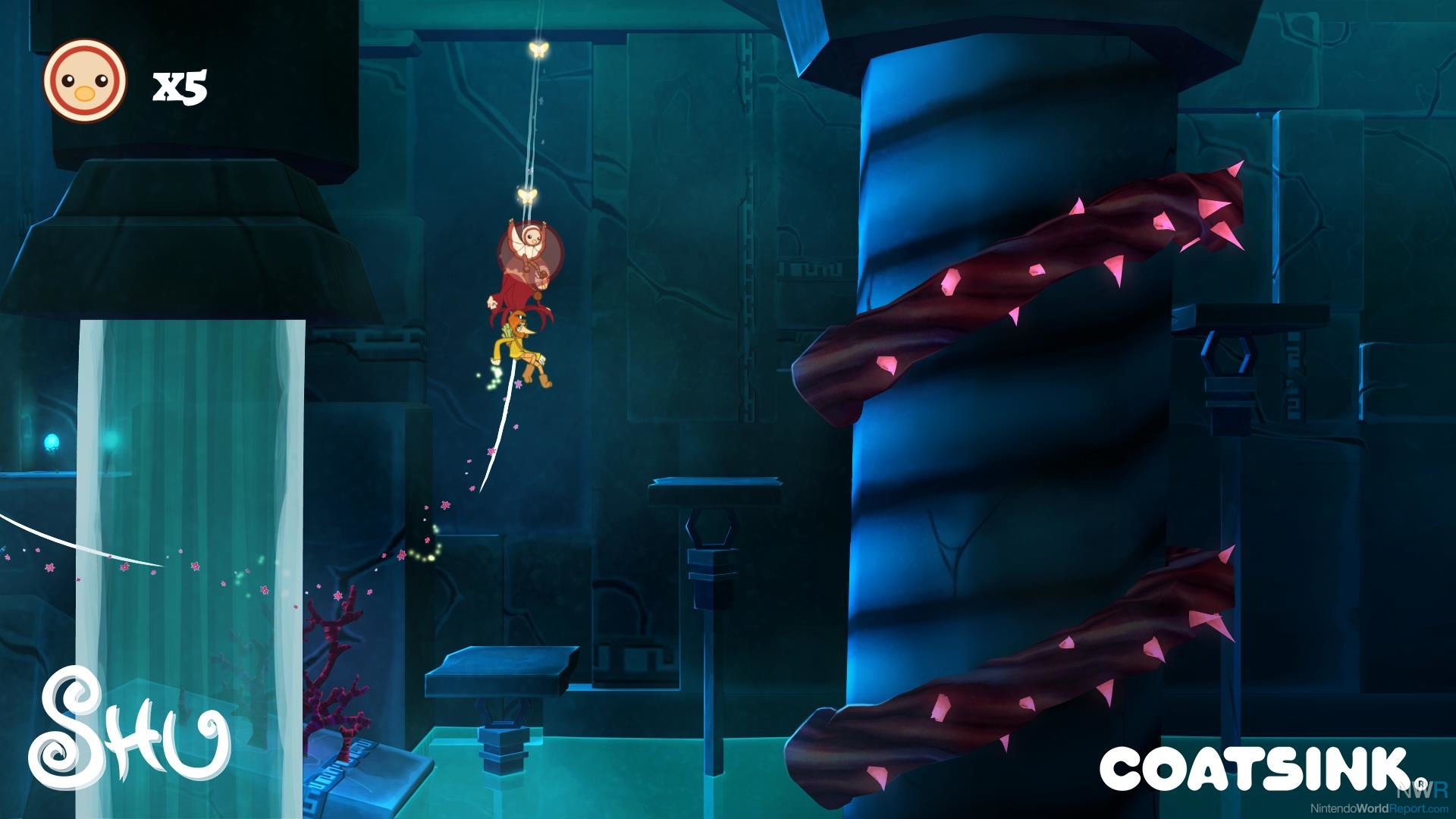 While Shu is challenging, and I found myself dying quite often, it is also forgiving. Checkpoints are littered throughout every level, and each time you run past one it restores your life count to a full five. This comes in handy, as there are several spots in the game where I felt like I died because of a poorly placed platform, or a cheap death caused by a falling object I couldn’t possibly have known about. Those deaths would have been way more frustrating if I had lost significant progress, so I was thankful to see checkpoints all over the place. After finishing each level, you’ll unlock a time trial mode, if you’d like to challenge your skills further. There are also tons of collectibles to find (butterflies, lost baby owls, and stone tablets) for completionists. They don’t seem to offer much in the way of reward, but they do provide players with an extra level of challenge if they so wish to seek them out.

If you’re looking for a solid platformer, you may find Shu to be your remedy. While it never really shakes up the genre, it ticks all the boxes that platformer fans enjoy. Shu’s main campaign doesn’t last very long, just a handful of hours, but it’s designed so that players will want to continue playing to find every collectible and improve their timing. If you’re the kind of player that likes that sort of challenge, Shu may just be for you.