Mini-games out of context. 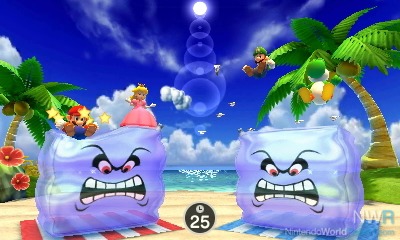 The Mario Party series holds a lot of personal nostalgia for me. I spent countless hours playing the first seven games of the series with family and friends in my youth. The unpredictable boards, hectic mini-games, and (mostly) friendly competition with those sitting next to me on the couch are memories I still cherish. So when Nintendo announced that the next installment in the franchise, The Top 100, would include the 100 best mini-games from all ten of the series’ numbered entries, I was excited. Mini-games like Bumper Balls, Snowball Summit, and Ice Rink Risk were sources of laughter and fun when I was a kid. It was my hope that returning to these brilliant mini-games could be a course correction for a series that has lately strayed from many of the things that once made it great. It’s unfortunate, then, that The Top 100 doesn’t go all-in on the nostalgia factor, and prefers instead to offer these mini-games out of their initial context in a manner that seems somewhat disconnected, and quickly becomes boring.

There are a handful of modes to choose from in the game’s menu, but if you want to cut straight to the chase you’ll find at the very top a mini-game selection mode, where you can simply choose one of the hundred mini-games to play from a list. Not all 100 of them are unlocked right away, however, as the game requires that you play through a single player campaign to unlock a couple dozen of them. This campaign is pretty bland; think of the world map in the original New Super Mario Bros game, but instead of each dot on the map representing a course to run through, it instead takes you to a mini-game. Upon reaching the end of a world (of which there are four total), you’ll come face to face with a boss enemy that you must defeat in a mini-game in order to progress. The campaign is pretty simple, and lacks challenge for the most part. You don’t even have to win each mini-game; you’re rewarded with completing the level and earning stars and coins so long as you don’t come in last place. Earning 100 coins nets you an extra life, which you’ll often need due to the randomness of some of the mini-games. Losing a mini-game costs you one of your lives, which at several points caused me a headache when a game came down to luck rather than skill. I’ll be honest in saying that playing these games one right after another with no break in between is exhausting. What’s worse is that some of the games just aren’t a great fit for the 3DS system, as their original control schemes don’t always transfer well between consoles. While the campaign was mostly lackluster, I will say that the final boss challenge was surprisingly entertaining, even if it only lasted a few minutes. 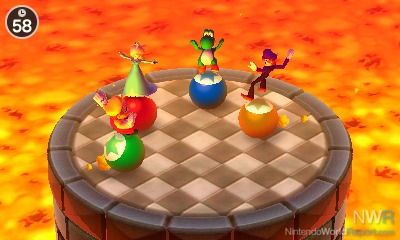 The core of Mario Party isn’t just mini-games, however, it’s also the game boards that Mario and his friends traverse. Players roll virtual dice and move their selected avatars across the map, looking for items and stars with which to gain the advantage over their foes. Unfortunately, this aspect of Mario Party is The Top 100’s biggest disappointment. There is only one multiplayer board to play, and it lacks the personality that earlier games in the series were known for. It’s upsetting because The Top 100’s attempt to play off nostalgia with these mini-games doesn’t work when those games are taken out of their board game context. It’s like Nintendo baked a cake, but left out half the ingredients. The player is left with a bad taste in their mouth, and the whole experience feels somewhat empty.

The Top 100 does offer several ways to play with friends, though. Those that pick the game up will be glad to know that download play is available, so only one person needs the cartridge in order to play with up to four players. Unfortunately, none of these modes feel satisfying to play more than once, so the fun and games won’t last long. All of the modes focus on rapid firing mini-games at you in segments of either 3, 5, or 10 and asking you to win as many as possible. Whoever wins the most is the champion, and that’s really all there is to it, aside from a Collection menu where you can listen to the series’ music and view some of the original characters.

For a full-priced game, The Top 100 feels rather shallow with its content. I was able to finish the entire game, playing every single mini-game, finishing single player mode, and checking out the other modes, in around three hours. And while the joy of Mario Party is typically in playing the boards and games over and over, there’s really no incentive to do that here since the only available board is pathetically underwhelming, and playing the games in rapid succession is tiresome. The Top 100 isn’t a terrible game, but it’s an experience that rings hollow when it could have been so much more.

Sounds kind of disappointing. I was planning on buying it. Not sure if I still want to

It turns out the highlight of mario party is just being a monster to your friends in the board and not the shallow ass minigames, which at their best are a tool for that first part.