Conception II is the sequel to an Atlus RPG that never saw the light of day anywhere but Japan, and based on the premise to the series, not many people questioned why. A dungeon-crawler dating-sim series about making magical babies incurs some skepticism. Now, finally with the release of Conception II for the Nintendo 3DS, the rest of the world gets a shot to see what this is all about.

Since the beginning, many sources have been equating the Conception series with one of Atlus’ other, more famous series: Persona. Both of these share a combination of dating-sim elements with action/adventure RPG, requiring players to interact with people on a human level, doing day-to-day mundane things alongside their quest to save the world. While some people can find it tedious, this dynamic introduced a new dimension of challenge into RPG gameplay, forcing people to strategize in the way time was budgeted, as well as in battle. Persona has blended this very well in the past, and we anticipated Conception to live up to the standard. However, eliminating a few core elements that made the dating-sim component in the Persona series so successful causes Conception to fall flat in this regard.

For Conception II, the dating-sim portion manifests in two ways: Bonding and Classmating. Both of these are integral to the storyline and game mechanics, since players must create Star Children with their female companions in order to battle and progress through the dungeons. There are seven girls to choose to bond or classmate with. In order to bond, you have to talk to them, just like real people. Players are given just three heart points to use upon entering the academy, one heart spent for each interaction with a female classmate. While this makes it seem like there has to be some actual thought and decision making here, there isn’t. These heart points can be regained at any time by resting in the dorm or by entering a labyrinth, and because Conception II has no time progression for these events, there’s nothing stopping you from chatting, resting and then just chatting again as much as you want. It does make accumulating bond points (BP) for creating Star Children a cinch, but this simplicity, plus mostly boring conversations with heroines plucked right out of a trope-filled anime, means that shopping for weapons quickly becomes way more interesting. 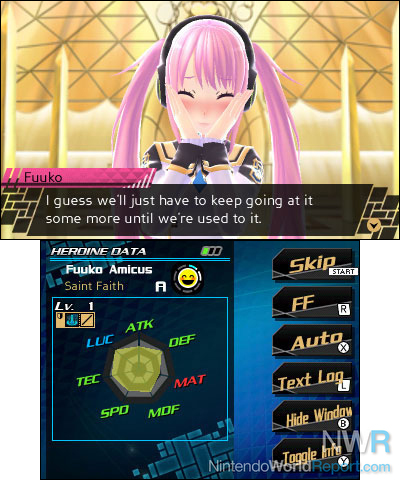 Classmating is just as awkward as you might predict. After you’ve accrued BP from your special bonding time, you and your chosen heroine head on over to the church, complete with a dirty old priest who makes asides about young girls (oh, and he’s the headmaster of the academy too!). Some sessions are pre-empted with yet another conversation with your heroine, which usually pertains to how well you’re going to perform… at creating Star Children, duh! Get your mind out of the gutter. One semi-nude, erotic handholding scene later and you two are left exhausted and panting and sometimes even talking about how well you did. After you get your twelve-year old giggles out (which took me a little while, not going to lie), this becomes just cringe-worthy at times. The only part of this that surprised me was how fun it was creating and customizing the Star Children themselves.

Battle and dungeon-crawling is a complete 180 from the monotony, tedium and strangeness of the dating-sim gameplay. Creating Star Children to save the world is the name of the game and it is awesome. Star Children are basically Pokémon. You can name them, they have different genders, and you breed for them over and over again. For me, this quickly became the only reason I even cared about the game’s heroines because each of their stats directly affected my Star Child’s class options and maximum level. Level grinding each heroine individually was sometimes irritating, but each time a new Star Child class popped up, it all became worth it. 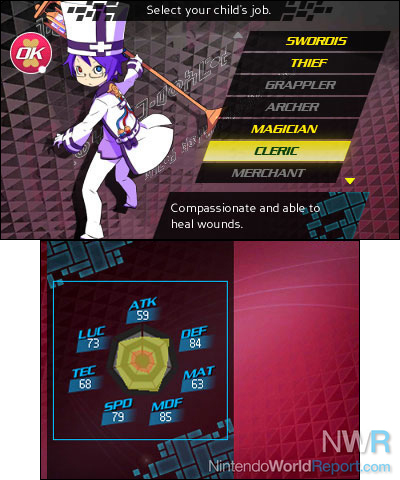 A variety of Star Child classes means there is a lot of options when it comes to customizing your three different Star Child trios to take into battle. While more diversity in your classes seems like the better option, having three Clerics on a team, for example, can yield some great team skills that really make your party a force to be reckoned with. Swapping Star Children in and out constantly for new labyrinth levels and bosses was one of the most interesting strategies to master in the game.

You’ll also constantly be creating new Star Children, which is pretty simple thanks to how easy it is to get BP from the heroines, because Star Children max their level fairly quickly, especially in the beginning of the game. So what do you do with them when they’re maxed out? Why, set them free of course! Independent Star Children become productive members of society in town when they’re finally free to leave the nest. As more of them are given their independence, more things in town become accessible. And some of them even have the heart to give some presents to dear old Dad. Much better alternatives to real children.

The whole dungeon half to this game harkens back to the Persona series again, but gives players enough shiny new features to make us easily forget. Throughout the world of Aterra, there are seven Dusk Circles representing the Seven Deadly Sins. At the start of the game, many of them are dormant, but they activate as the story goes on and even spawn side dungeons full of rare items for your treasure hunting enjoyment. Each of the labyrinths within these Dusk Circles consists of several floors players must fight through in order to reach the boss responsible for spawning the whole thing. The map gradually reveals itself as the player steps through doors into various halls and rooms, and monsters wander the map as opposed to attacking at random, conveniently color-coded to make monster-killing quests and level grinding easier. It is extremely easy to jump in and get your footing almost right off in these dungeons, and seemingly endless treasure and bonuses make thorough exploration worth your while. 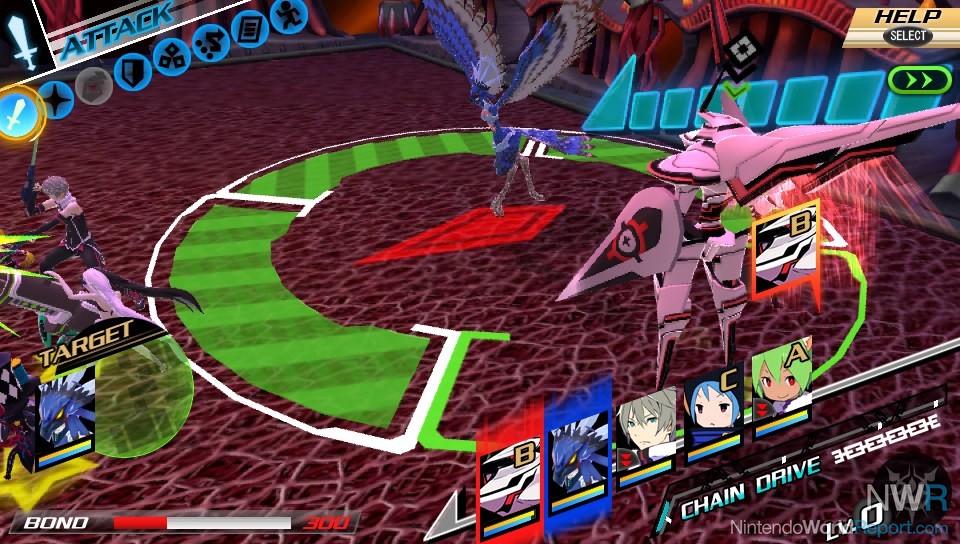 Battling itself is another example of something that is easy to catch on to and satisfying throughout. Conception II utilizes a system based on directionality of attack, where weak points rely on where you’re standing in relation to your enemy. There’s not much challenge when you only have a single regular enemy to face, but this system becomes infinitely more complex the more enemies there are and as speed becomes a factor. If you aren’t careful, attacking an enemy’s weak spot or at the wrong time can leave you or one of your allies exposed.

It’s no small wonder why the first Conception title didn’t go abroad if it is as rife with Japanese tropes as this one is, including, but not limited to, transformation sequences, teacher-student relationships and the token big breasted girl whose boobs jiggle when she so much as breathes. Conception II starts with an interesting story, an engaging turn-based combat system and Star Children (enough said), but is often bogged down by its awkward dialogue and dull characters. If you can find it in your heart to forgive and forget some of these things, there is an RPG under it all worth playing, even if it's definitely not the best thing we have seen out of Atlus.

Thanks for the very interesting review, Becky. I'm fascinated that this was released in the west, especially since apparently it doesn't have much going for it beyond its novelty value.

Lol, so the only thing that's wrong with this game is the stuff that isn't actually mandatory or a part of the main game. And you gave it a 6 for that.  Nice review.

Since half the game is a dating sim (and those elements connect directly to the battling half), it's pretty mandatory to engage in classmating and bonding with the other characters. I think a 6 is pretty fair if an entire half of a game doesn't live up to it's premise