A bodacious brawler or a mere boobie trap? Read on!

At first glance, Senran Kagura Burst appears to be a shallow, morally flimsy game that caters first and foremost to a male's hormone-driven desire to see exposed, jiggling female anatomy. Such assumptions would be absolutely right. However, stripping away the layers of debauchery like so many sailor-seifuku uniforms this game likes to shred before your eyes in detailed stereoscopic 3D, you'll find a surprisingly good beat-'em-up nestled amidst the boob-heavy style.

Containing two full story campaigns, each with their own main cast, missions, and unlockables, Burst is actually the second game in the series to hit Japan. Thankfully you're not missing anything, as one campaign is the entire first game, and only the other one contains any new content. Thus, Burst can be considered more of an expansion than a sequel. Depending on which campaign you play, you'll follow the adventures of the five Hanzo National Academy girls, shinobi-ninja-in-training, or the five Clandestine Hebijo Academy elite students, who are training to become “evil shinobi.” The two stories revolve around each other and provide insight into the individual characters' pasts, motivations and values as they follow their own paths. 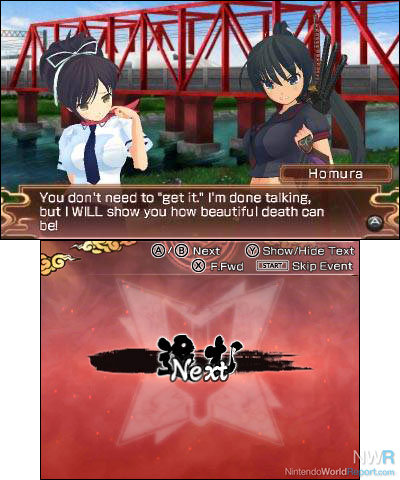 In true classic beat-'em-up fashion, the missions pit you against hordes of identical-looking enemies to beat into a pulp using your chosen character's individual fighting style. Story-crucial missions will sometimes require you to use a certain character, but completing the mission once will open it up for you to replay as anyone. The action is fast and frantic with a slew of attack combos to learn and use for each of the girls. Knocking an opponent off the ground gives you the chance to leap into the air in pursuit and perform an Aerial Rave, a kind of mid-air combo that can be chained into additional Aerial Raves with precise timing. Juggling enemies above the stage is pretty satisfying and adds a unique aspect that fits in nicely with the game's ninja theme. The real crux of the missions are the ones that pit you against members of the opposing school. Blind button-mashing will cost you dearly in those duels and strategy is key.

When you take damage, your character's clothing will start to tear away until she's left in her underwear, posing a larger threat to her HP. Once building up a skill gauge through regular attacks, you can perform a Shinobi Transform, which replenishes your character with a new outfit, bestows heightened strength and speed, and the ability to use special moves to dispatch large groups of foes at once. You can also choose to take on a mission in Frantic Mode, which strips your chosen girl down to her unmentionables for the weakest defense, but gives all the offensive power and moves of the Shinobi form. Depending on whether you play in Shinobi or Frantic modes, you'll build individual strengths as you gain experience. Maxing out each character's stats requires passing the missions in both modes. The quick pace at which your characters level up can make the game appear a little too easy and you'll likely breeze through the main story without breaking a sweat, but completionists have plenty of challenge ahead. 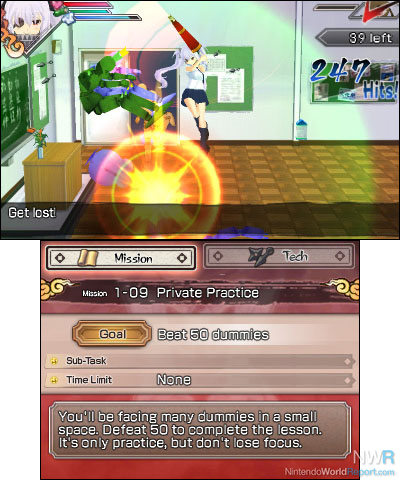 The missions are broken up between dialogue scenes and considerably lengthy read-along story segments. Some liberties were taken in the game's translation to sound more natural in Western culture, but overall the writing is decent. Each of the girls has a heavily clichéd (albeit likeable) anime personality stereotype and the plot for each campaign can be predictably mundane at times. Thankfully, the story picks up with some surprisingly dark concepts and philosophical drama later on with some semblance of character development. It's worth sitting through both campaigns at least once. Of course, you have the option to skip the entire plot if you just want to get back to the bouncing boobs.

There's a huge amount of content to unlock including attacks, costumes, artwork, movies and more.
If you're not offended by anime girls with ridiculously bouncy watermelon breasts in various stages of undress, there's an enormous game packed with hours of shallow-but-enjoyable narrative, tons of retro-style beat-'em-up fun, and a few guilty pleasures along the way.

If I didn't have such a formidable backlog of 3DS games (not to mention a Link Between Worlds coming out tomorrow) I'd buy this game now. I'm glad it came stateside.

"If you're not offended by anime girls with ridiculously bouncy watermelon breasts in various stages of undress..."

Hell, I prefer them that way.