If only someone could help me spot the "party" in this game...

Upon loading up Spot the Differences: Party! on your Wii U, you'll be greeted by a pleasant and inviting title screen depicting a top-down view of your countertop. Steam gently wafts towards you from a cup of coffee, and a paper folio filled to the brim with pictures invites you to a relaxing session of spot-the-difference puzzling fun. Unfortunately, any entertainment gleaned from the admittedly charming and crisp HD imagery on display is little more than a temporary lapse of judgment under the pretense of fun to be had beyond that point. Don't be fooled by the “party” in the game's title, this is not a game you'll want to break out during any kind of social gathering, lest it be one of the last events your friends will attend. 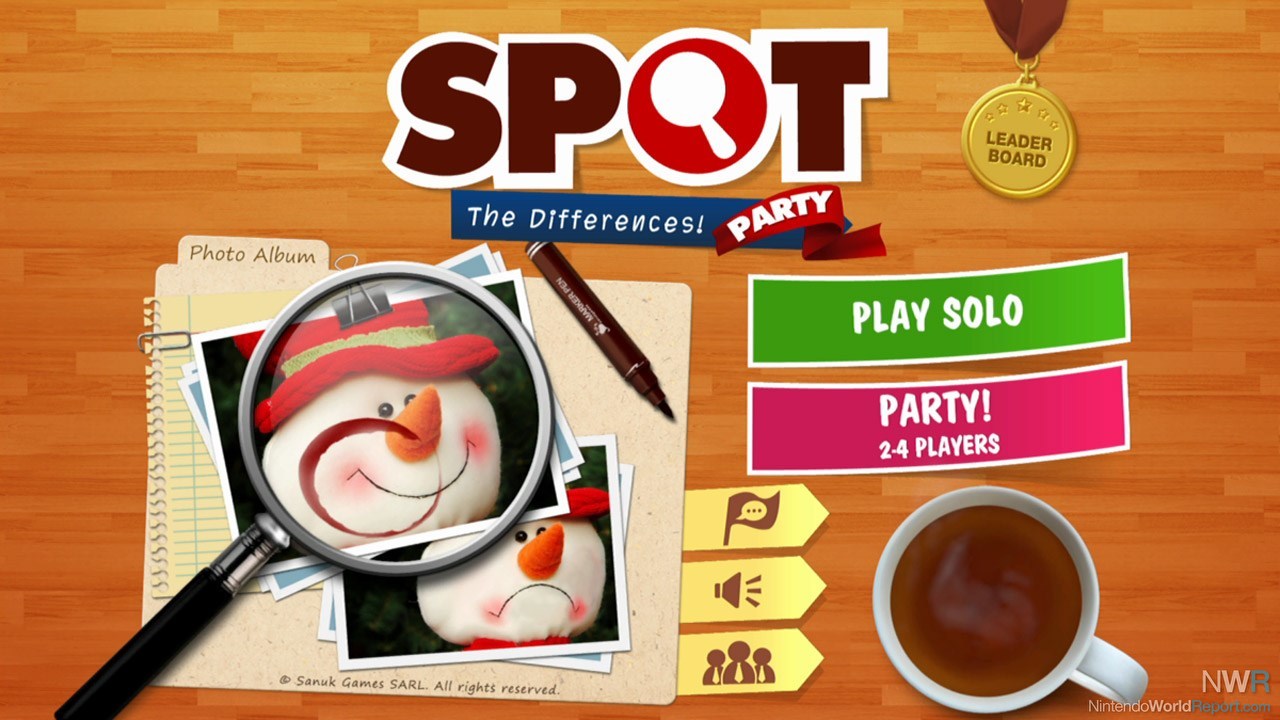 The snowman represents the player, before and after playing this game.

Spot the Differences promises a total of 360 pictures, all of which have five differences each to find. After selecting the number of players, you'll get a countdown from three and get thrown into the action. The display on the TV and the GamePad is identical, allowing you to choose between tapping the pictures in your hands or pointing at the TV with the Wii Remote. As mentioned earlier, the images are interesting enough, the picture quality is quite nice, and the photo editing is evidently applied by a skilled artist since none of the differences between the pictures look unnatural or fake. However, here's where the multitude of problems begin to surface. 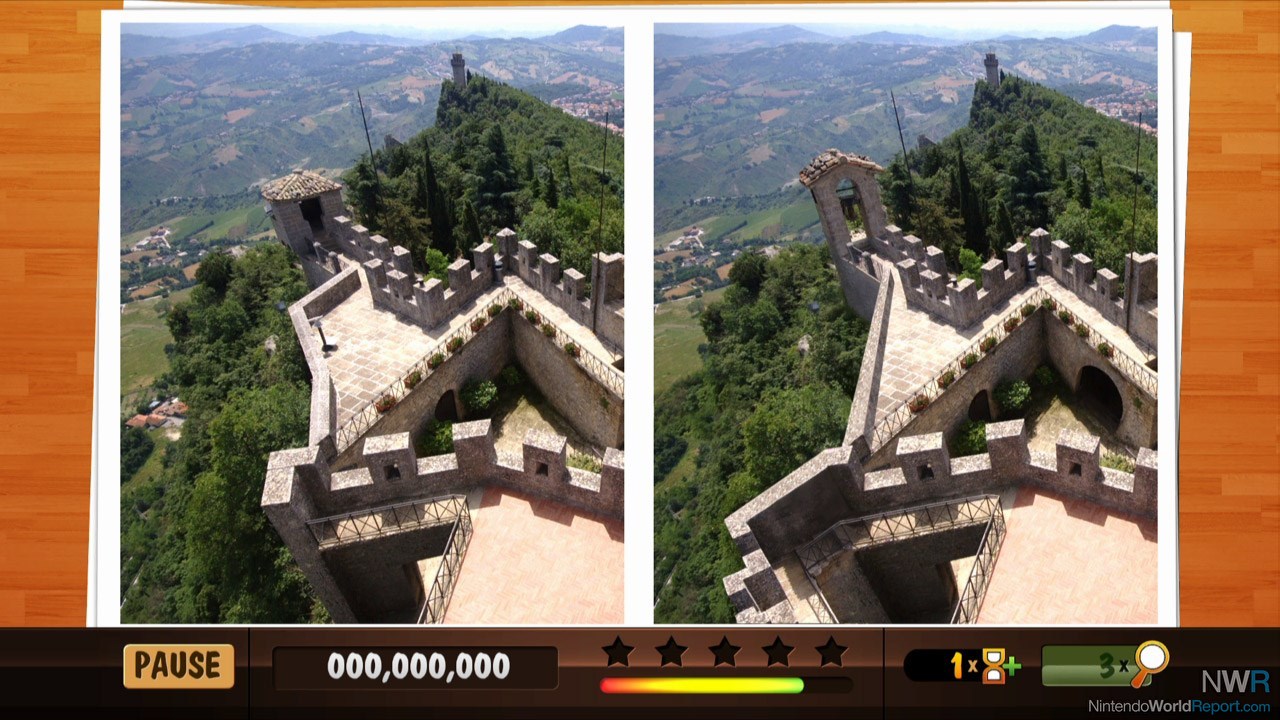 Sometimes the image-editing trickery is applied too well and the differences are minuscule: one tiny house in the background is a few shades darker, or a cloud is moved half an inch to the left. This wouldn't be an issue if the game didn't impose a strict 30-second time limit on each puzzle. There are no options to change the amount of time you're allocated, and the fluctuating difficulty between puzzles and rapidly expiring time limit turns what should be a relaxing activity into a stress-inducing race against the clock. Things get even worse with the poor execution of help items. At the beginning of a session you have a set amount of hints and items the game calls “extra times”, which can be used to automatically point out one difference, or give a scant 10-second extension on your puzzle, respectively. The problem is, if you fail to locate all the differences on your first try, the game will then automatically apply a time extension, whether you want it to or not. Fail to complete the puzzle after that, and all your hints will then be used at once without your consent, showing you the location of the remaining differences. If you have any leftover help items after the game robs you of your limited supply, you'll move onto the next picture to repeat the process until you eventually have no backup items to cash in. A button to simply skip a difficult puzzle and move onto the next, even at the cost of some points, would have been appreciated. 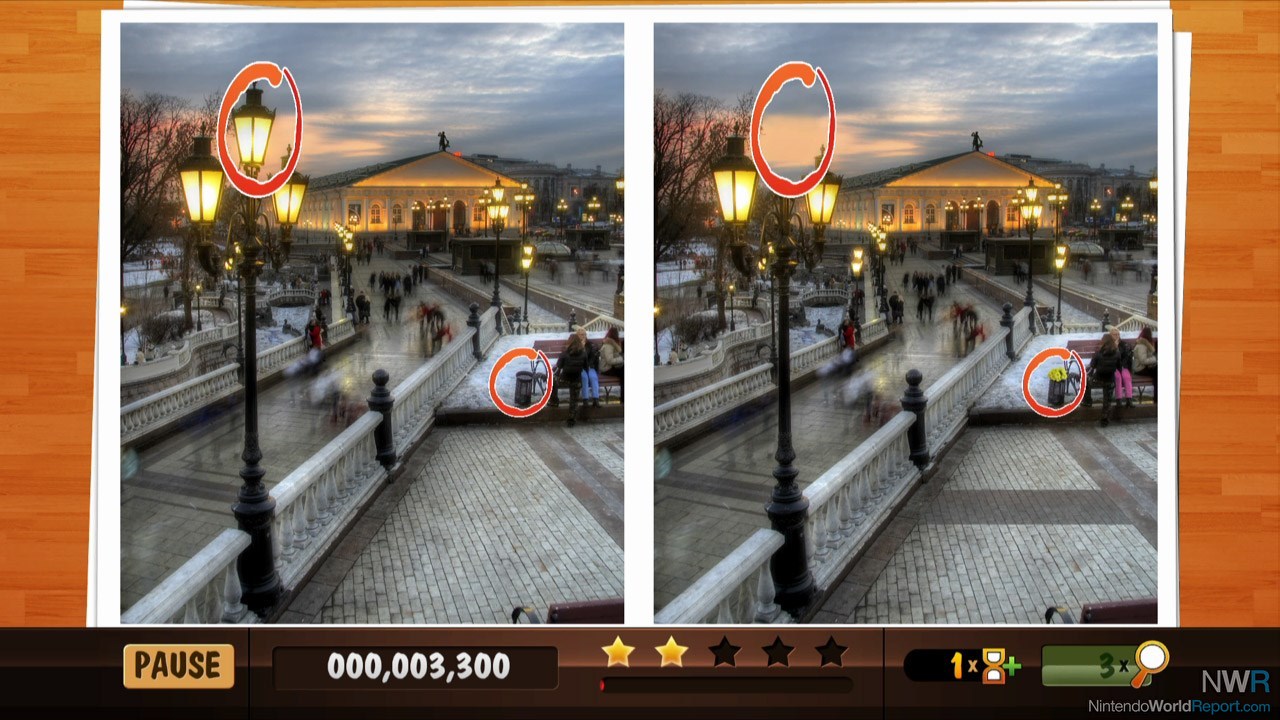 When your items run out and you can no longer continue, a large red “TIME's UP!” stamp (yes, with inconsistent capitalization) is plastered across your screen and you're promptly kicked out onto the high-score name entry screen. If you were wondering where the remaining differences you failed to spot were, you're out of luck. If you can muster the attention to play long enough to beat any high-scores you've set, there's a local Leaderboard on the title screen to check out, but you can't compete with other players' scores online. Another sad fact is that there's no way to replay puzzles you've already completed, you simply have to keep playing until the random picture selection will bring it up again. I would have liked to see a gallery of previously viewed photos implemented in the options; even the folio on the title screen is labeled “photo album” to tease this inadequacy.

The bottom line is that while the game is presented quite well, the mediocre experience is bogged down by unnecessary restrictions that do nothing to save it from a glancing waste of time at best. Your money would be better spent buying a puzzle book or newspaper, or looking up any of the hundreds of free browser based spot-the-difference puzzles online.