The retail edition will include the base game, expansions, and DLC all on a single game card.

The Witcher 3: Wild Hunt Complete Edition will take "roughly 32GB" of storage space on the Nintendo Switch, according to the game's official Twitter account. In addition to this, the game's marketing materials promises that the physical game card in retail versions of the game will include the base game, the Hearts of Stone expansion, the Blood and Wine expansion, and 16 pieces of DLC. This makes it highly likely that the Witcher 3 physical copies will be utilizing a 32GB Switch game card, one of the few games so far to make use of the highest capacity game card known to be available, and possibly the first one to do so outside of asia.

The game is roughly 32GB.

Only a handful of other games are known to have used the 32GB size for Nintendo Switch media, none of them available in western markets. When the Switch launched, Dragon Quest Heroes 1 + 2 was sold on the same cart in the Japanese market, but neither was released outside of Japan. Later on Resident Evil Revelations 2 was also released on a physical game card in Japan, and since the game's download size is 26 GB it would have to use the larger 32 GB capacity as well. Like Dragon Quest Heroes 1 + 2, this physical release did not come to other markets. Finally, the Japan and Asian market retail releases of Final Fantasy X/X-2 HD includes both JRPG games on a single game cart, but in the west only the first game was included on the cart and the second one had to be downloaded. 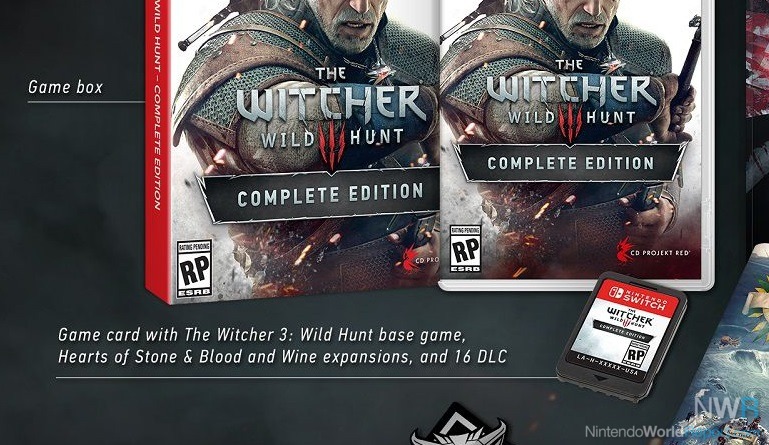 If indeed The Witcher 3: Wild Hunt is 32 GB when all is said and done, this would very likely make it too large to download on a brand new Switch that's just been taken out of the box and doesn't yet have an SD card. When Dragon Quest Heroes 1 + 2 released in Japan, Nintendo advised users they'd need to have an SD card to store the game on if they wanted a digital version: the Switch technically has 32 GB of storage, but in real world use and after formatting the memory only 27 GB of that is available.

I should hope that a game titled the "Complete Edition" includes everything on the cart. Will definitely be buying this physical since I am too cheap to buy a big enough SD card to afford a game of this size digitally.