Restoring a lost world to its former glory is way more fun than you think!

Dragon Quest VII is one of the few mainline games that I never got to play. This happened for a few very obvious reasons. For starters, the Japanese Role Playing Game never graced Europe when it was released on the original PlayStation. From what I have seen and heared, it wasn't a jolly good time as the localised script was less than desirable. When Nintendo and Square-Enix decided to bring this game over, they went in harder than anyone could have predicted. They gave the story a massive revamp and fixing every major problem that the original had. That sounds easy on paper, but does it make it for a fun game in 2016? In many respects, absolutely yes.

One thing that you will notice with Dragon Quest VII: Fragments of the Forgotten Past is its large emphasis on story. You take on the role of a young boy, who happens to have the greatest fisherman as his father. Everyone puts their faith in this man, including the King of the island Estard. Estard can be considered your main hub for this adventure as many notable characters gather here. Talking about the King, the young Prince Kiefer is actually your best friend. You directly notice this from minute one as you explore caverns and temples together. This point becomes important for how the story sets the stage. 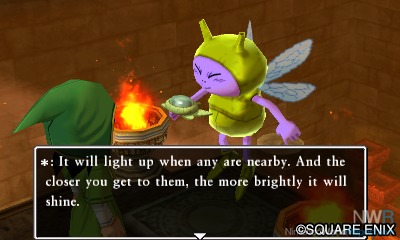 You see, you and the prince feed upon curiosity. This leads you into finding the Cave of Mysteries, where strange things seem to be afoot. Your pure hearts upon open up the gates and this is where the true challenge awaits you. You will be tasked with finding special tablet fragments that each create a pattern. When placed on pedestal, it would open the passageway to a new world. Kiefer and yourself manage to do this, but not before Maribel tags along. This strong and young woman doesn't take no for an answer and wants to know what the pair of lads have been hiding. You put the pieces into place and are flashed away to the real start of the adventure.

I say real start, because the game is slow up to this very point. Now granted, this is only the first 80 minutes of the game, but it does drag a bit. You just mostly walk around with no inpending threats, doom or disaster. There are no monsters to fight and you just walk around at your own leisure. While I wouldn't mind that as much usually, the game does a lot on world building for such a small island. It saves valuable time for later as it just keeps trucking, but it remains a hurdle for people expecting an immediate gripping experience.

Anyway, you are magically transported an unknown island. This comes as a shock to the group, because they are certain that only Estard exists. The team decide to explore it and they come across a village named Ballymolloy. Misfortune has hit this town hard as all the women have been taken by a group of horrible monsters. Their only hope, the hero Hanlon, has been badly wounded in his last act and needs medical attention to be battle ready once more. It sees our heroes traveling to the Rainbow Mines, placed south from Ballymolloy. They will need to retrieve the green rainbow rock that can heal the fallen warrior. 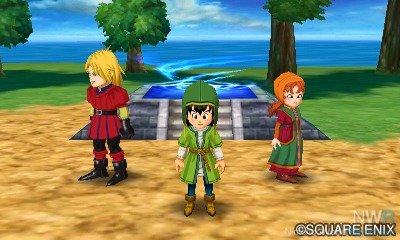 That is easier said than done as puzzles and enemies await our friends. They will need to push blocks and let two of the same color slame into one another. You will need not only move them so that they line up, but also to create a path that actually makes sense. The first few block puzzles can be done with ease, but as you move along, it does sort of become tricky. With the puzzles I encountered so far, this has been the same ordeal. You need that second to understand, but then Dragon Quest VII starts playing with your expectations. It isn't uncommon that you have come out and in the room to reset all of the blocks!

Admittingly, the bigger thing is the combat here. It is the classic Dragon Quest flair you would expect. You make tactical decisions with the turn based combat options available to you. You can do a regular attack, spells, abilities, defend, and use items to secure step by step a victory. There are options to let all allies make decisions by choosing presets or you can choose attacks for them if you have specific things in mind. At the time of writing, I don't many spells or abilities available just yet, but there are two I want to highlight. First we have Frizz, which is a small fireball that does an okayish amount of damage. The other is Flame Slash, a hefty sword attack that does garantueed a lot of damage to a single opponent. It is a good start and I can't wait to find out that I will get next. The battle flow is amazing, which makes going for those higher levels all the merrier.

Between the battling and puzzling, it is all about exploring that world. In many ways, Dragon Quest VII is a very different beast. Once you finish your quest on the island and return to Estard, it turns out that you brought the just visited place to the current day and age. Just like the full title implies, you are bringing islands (fragments if you will) back from terrible fates. You will see new life on the island and locations that are different from their ancient counterparts. It will trigger you to revisit all of those places and find new tablet pieces to set up the next journey. The entire world feels interconnected, but in a different way than your typical JRPG. Every island bring something exciting and different without feeling completely out of place. 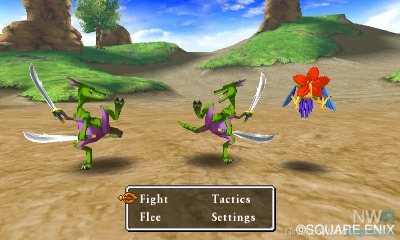 With many islands in the package, it does mean that the individual places are smaller in scope. It doesn't take exactly long to see everything an island has on offer. It makes the journey you are going to partake in a bit more linear. There isn't exactly much wrong with that as the set pieces are interesting and keep you motivated all the way through. It is also imported to note how much effort has gone into this port. The original was a semi 2D experience as it was sprite based, but you could freely move the camera in all directions. Now this game has embraced 3D in every major way. The islands, characters and even the battle scenes are completely polygonal. This brings the game not only to a higher playing field, but it makes also more comparable to entries that came after it.

The game controls are quite nicely I must say. You explore the world with the Circle Pad, use the B-button to talk with your mates for tips and press X to bring your handy menu. You can equip items, see you in-depth stats, look back info on certain plot points, set the game up in a way you like and quick save your game. (Just be aware that you need to go to a church to save your game for real.) As per usual with these kinds of games, there is a map on the touchscreen for good measure. The only thing I don't like about the controls is how you move the camera around. You can't use the built in C-stick on the New Nintendo 3DS, which would have been perfect for that. Instead, you have to do it with L and R. This isn't as precise as I would like it to be and it is just hard to nail down personally.

You will explore every nook and cranny using these controls. This is needed, simply because not everything is in your line of sight. A lot of items and money that you pick up along the way are in crates and pots that are spread all around. Through this manner, you will also find hidden locations that are tucked away with more goodies or something that may be even essential to the plot. The game doesn't do a great job of telling you this, but you figure it out as you go along. While you stop by and search for goodies, why not head to the stores? You can stack up on weapons, herbs and all the important bits that your journey that much easier! 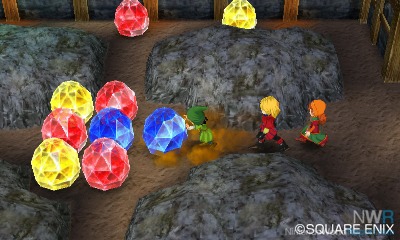 The presentation of Dragon Quest VII is grand. There are crisp and colorful visuals that make the world immediately stand out. A major shout-out must be given to the 3D visuals of the Nintendo 3DS, which make this game shine like no other. There is a lot depth added and the effort clearly shows. Add to that the music that makes Dragon Quest to what it is and you have something extremely solid in your hands.

I am only getting started with Dragon Quest VII. After a solid five hours, it is clear to me that this could be the ultimate version of the game. Crisp visuals, a wonderful world and all the charm you would expect from a Dragon Quest. With a nice variety of characters, you can't wait to find out what is next. While this is a decent enough start, I know that I am not quite done. There are gameplay mechanics I haven't seen yet and I like to see more islands before I go more in-depth.

I rather like the Dragon Quest games, and finally seeing VII arrive on 3DS is the only gaming release I'm actively excited about in 2016.


Have you played the DS games from this series?  It sounds like the engine is very similar but polished a little bit. I wondered if the comparison is apt, or if there were any significant changes/improvements made outside of more detailed graphics.


Are there any improvements specific to New 3DS?  Some games (Monster Hunter comes to mind) have improved textures and reduced loading times with the improved console. Since this originally released in Japan before New 3DS was a thing, I'm assuming that's not the case here?

Were you able to discern if the music is MIDI or orchestral?

Believe it or not, from what you described I think the beginning is actually less slow in this version than the original.

I'm looking forward to this game, as it's the only one left in the mainline series that I haven't played, aside from the obvious DQ X. I actually do own a copy of it for the PSX, but it seems like it would be a real pain to play there for various reasons, so I've been waiting for this instead.

I played through the DS remake of Dragon Quest IV earlier this year and, while it was a solid game, I had a lot of issues with it and came away underwhelmed. Based on the information shared during the Treehouse segment at E3 this year and these early impressions, it sounds like Dragon Quest VII takes a huge step forward in almost all the areas that I had issues with in Dragon Quest IV and that has me really excited to play this game next month. It's a shame that this and SMT IV:A are coming out within days of each other. I'd also like to play that at launch, but I don't like to have two story-driven RPGs going at the same time.

I'm looking forward to reading more impressions here, especially when you get into the class system they touched on during E3. That's one of the things that has me most excited about this game.