An Evening with Pokemon Go

I’m on the road to become the greatest trainer, and I won’t quit until I’m No. 1.

Niantic’s Pokémon Go quietly launched, staggered by region, over the past day. Tech-savvy users were able to install the game early, so I was able to spend almost two days with the game. The game seems mostly ready for release (and is a ton of fun), but still has a few issues. I played mostly on an older Android. 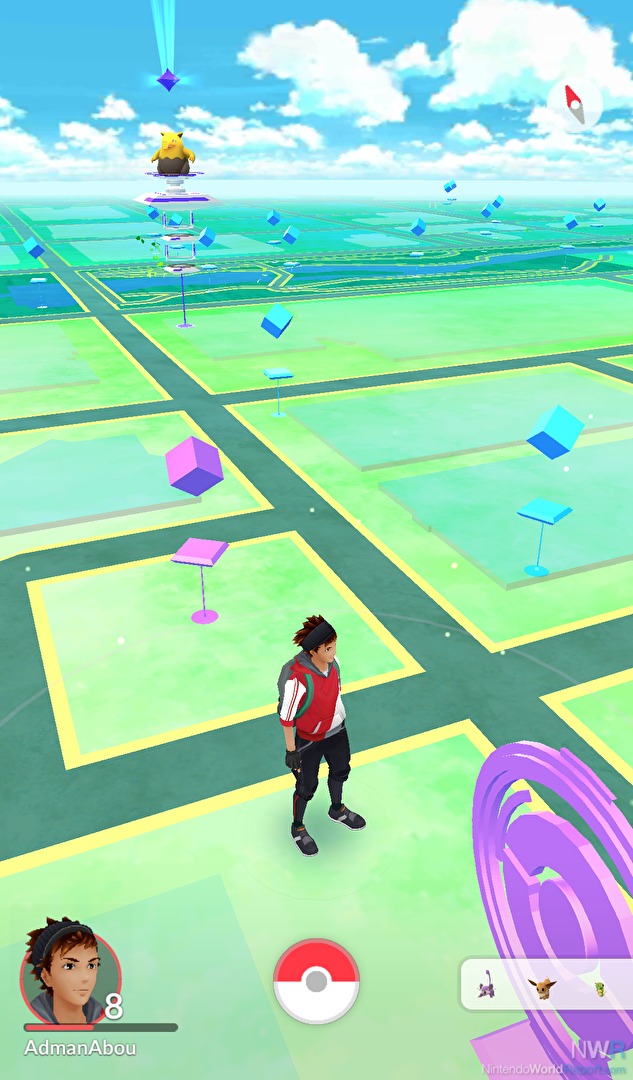 The game tasks players with travelling around the real world in order to mine PokéStops for items and eggs, capture Gyms for one of three teams, and catch Pokémon. The PokéStops and Gyms will all be familiar to players of Niantic’s first AR game, Ingress; every location, complete with picture, was pulled directly from Ingress. These locations are loosely-defined as being historically or culturally interesting, so expect to see a lot of statues or cool buildings while playing. PokéStops drop a few items every five minutes while Gyms host the game’s battles. Pokémon can appear anywhere and at any time, so players far away from any points of interest can still capture Pokémon.

I quickly fell into my old Ingress ways. My friend and I carried giant portable batteries through our old Ingress farms: the university campus, historic downtown, and the hipster bar district. Items could be gathered from PokéStops from a surprisingly far distance, curing one of the biggest challenges of playing Ingress. The Gyms seemed to be at Ingress locations that changed hands often, so Gyms should be somewhat difficult to hold.

In about eight hours of playtime, I encountered 100 Pokémon from 30 different species. Nearby Pokémon are displayed by tapping on the bottom right corner. Distance is measured in up to three footsteps, so trainers have to play hot and cold to find rare Pokémon. When Pokémon are nearby, the phone vibrates and the Pokémon appear on screen. Tapping them starts an encounter. The same Pokémon almost always appeared at the same time and location for my friend and me but with different power levels. 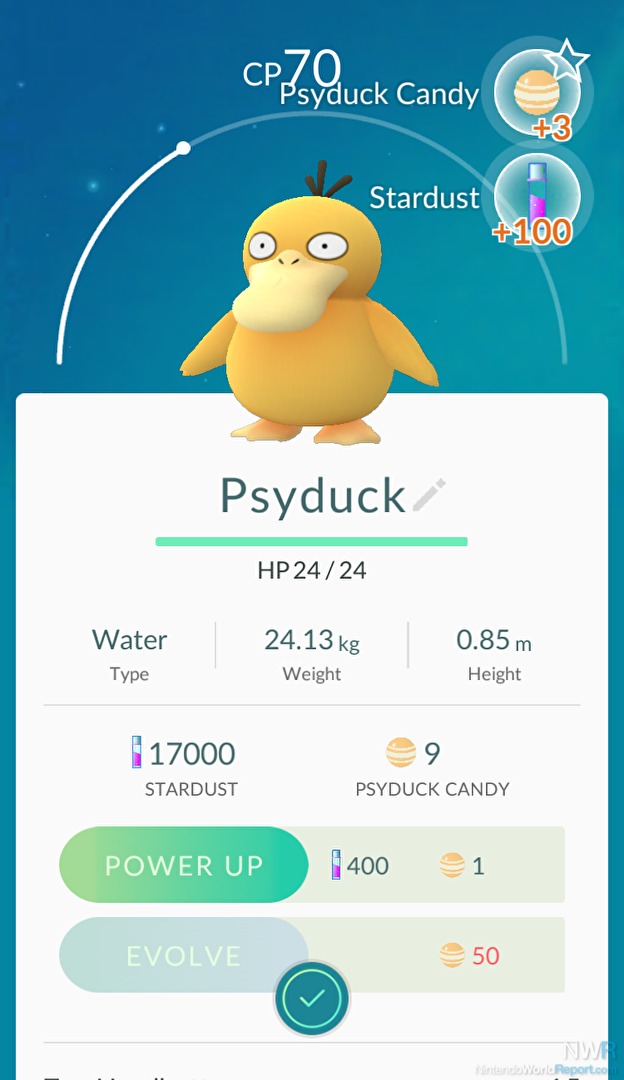 In an encounter, trainers can throw a berry in an attempt to prevent an escape or throw one of four types of Poké Balls. So far, I’ve only seen regular Poké Balls, but the game’s website promises Great Balls, Ultra Balls, and Master Balls. The player must flick the ball towards the Pokémon. While holding the ball, two circles appear around the Pokémon. The inner circle’s color indicates the Pokémon’s capture difficulty and continually shrinks to nothing before reappearing. Throwing the Poké Ball when the inner circle is smaller increases the chance of capture, but landing inside the circle when catching the Pokémon grants an XP boost. There’s also a bonus for spinning the ball in the air before throwing it. Stronger Pokémon will jump and attack incoming Poké Balls, and, after too many failed throws, the Pokémon will flee.

Each Pokémon has a CP, or Combat Power. Higher CP makes a Pokémon harder to catch and stronger in battle. I found stronger Pokémon as I leveled up, but Pokémon could also be leveled up or evolved by using items found with every captured Pokémon. A Weedle, for example, comes with a few Weedle candy and some Stardust. Spending 12 Weedle candies evolves Weedle into Kakuna, 50 evolves Kakuna into Beedrill, and just one candy with a scaling amount of Stardust levels up a Pokémon’s CP. Unwanted Pokémon can be traded in for one candy.

Almost any action earns XP, and, at level five, Gyms are unlocked. I was able to reach level five in about an hour. Trainers claim a Gym by placing a Pokémon there. Gyms level up when teammates battle the Gym and level down when enemies battle it. A Gym is claimable again when it is fully leveled down. A fully leveled up Gym can hold 10 Pokémon, but each trainer can only place one Pokémon per Gym. Pokémon placed at a Gym can’t be leveled up or evolved until they are defeated and automatically returned to the trainer with 1 HP. Losing against a friendly Gym will also leave each defeated Pokémon with 1 HP, but losing at an enemy Gym will knock out the Pokémon. Pokémon can only be healed with Potions and Revives found at PokéStops. 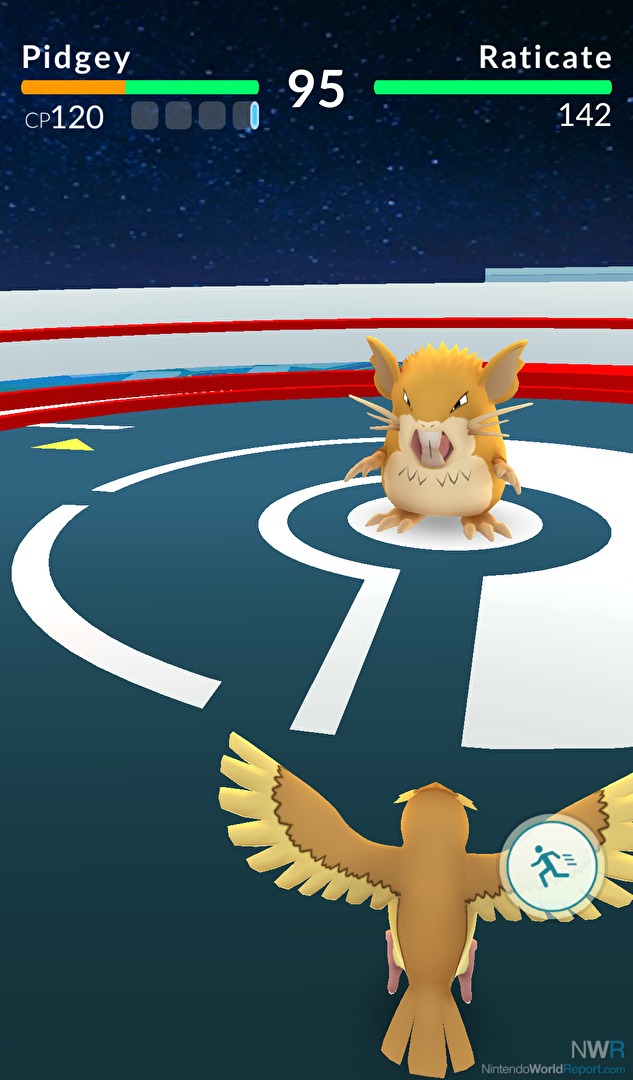 Once a day, trainers can collect 10 coins for each Pokémon they have at a Gym. These coins can be spent on Poké Balls, Pokémon-attracting items, and storage upgrades. Coins can also be bought with real money.

So far, I find the game incredible. I am a lapsed Ingress player, though, so I was able to get into the groove pretty quickly. The UI is slick and the map changed shade to reflect the time of day. The app ran pretty well on my three-year-old Android and was really smooth on an iPhone 6s. There are no trading or live battles yet, but the tap-and-swipe battle minigame against Gyms is fun and intuitive. As the launch reached more regions, the servers overloaded and wouldn’t let me log in. When it finally did, the game would occasionally lock up after I threw a Poké Ball, requiring a force close. The game is also a battery sucker, and the Battery Saver option in the menu just dims the screen when the phone is pointing down. My touchscreen sometimes stopped responding after I lifted the phone back up. The music is okay, and the sound effects are ripped right from the main-series games, but the Android app has a habit of dropping all audio until the app is restarted. Niantic’s website says they are aware of most of these issues, but they are still present.

I unlocked a few badges while playing, like walking a certain distance or catching a certain number of Pokémon, and they made me feel really good about myself. But the main point of the game seems to be building the strongest Gyms possible and taking out enemy Gyms. So far, I haven’t seen many enemy Gyms, but I haven’t looked since the game officially released in the US. Pokémon Go will only be as strong as the nearby community of players, so I hope my local Pokémon fans hop on board.

I'll just wait for Sun/Moon.  This sounds more like work than fun.  I'd rather just enjoy the real scenery when I'm out and about, not goof with my phone.

I'm in the same boat. This looks and sounds a lot better than I was expecting, but I'm usually out because I need a break from staring at some sort of screen. I'm glad a lot of people seem to be having fun with it though and I'll at least check it out once Canada has been deemed worthy of being able to play it.

I was very interested in giving this a whirl anyway and this write-up just strengthens it.
Thanks for the good detail.