Surely this will be a controversial Sonic game that isn’t. 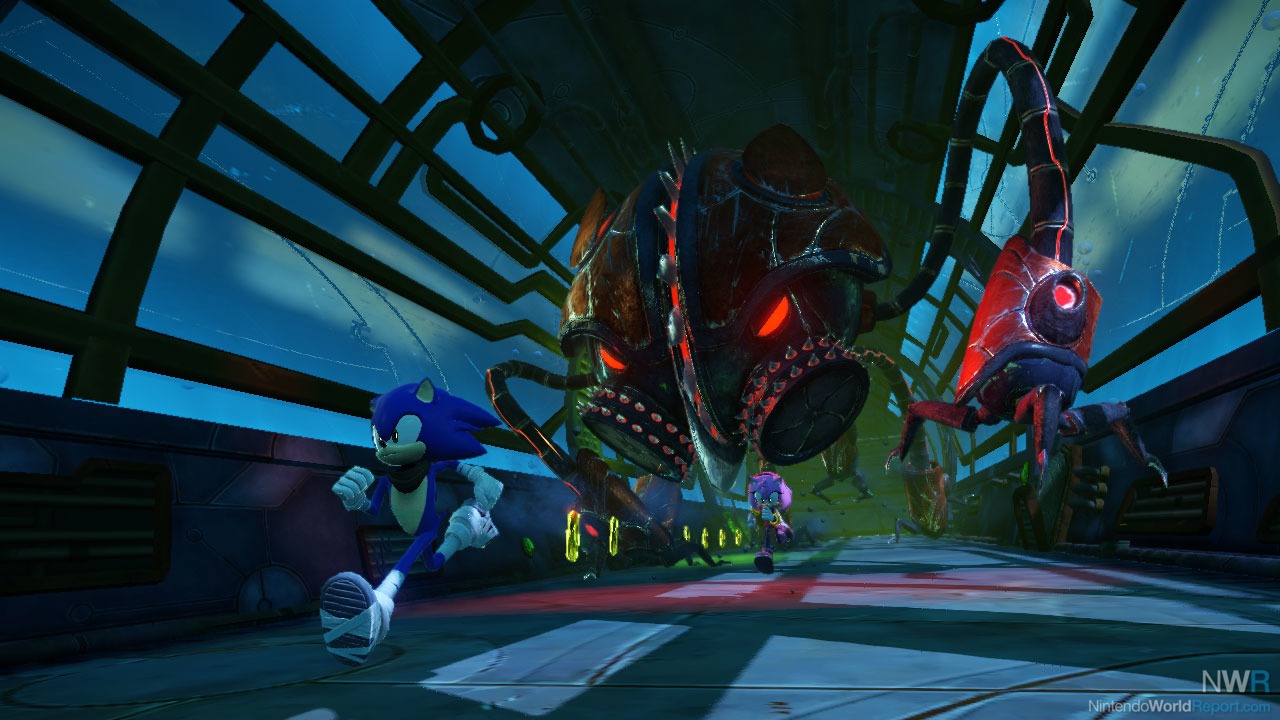 Four stages were on display in the Sonic Boom Wii U E3 demo. Two of them were what I would categorize as adventure stages, the third was a boss battle against Robotnik—sorry, Eggman—and the final stage was a more traditional Sonic-style action stage. The demo, which was single player, allowed the player to switch between Sonic and his available partner(s) at any time using the D-pad.

The adventure stages are a mixture of puzzle-solving, exploration, brawling, and slower-paced platforming. The player could switch between Sonic and his partner, which varied by level, at any time. I The level design generally alternated amongst kill rooms, puzzles/exploration, and platforming. The puzzle and exploration aspects generally consisted of levers to pull or switches to push and were the most tedious portions of these levels. I often overlooked or simply did not happen to view something from the proper angle and was therefore confused as to how to proceed. More than a few times I would jump off toward a portion of the stage that I thought I could reach (and would be able to in any other Sonic game), but would instead fall. The game is generous, re-spawning the player close to where he or she fell without losing progress (merely a small amount of damage), but I still found this very frustrating and confusing when it occurred. Perhaps this can be remedied with some additional visual cues or camera angle improvements, but I wouldn’t count on it. However, the more interesting adventure stage, which took place in an underwater facility of some kind, did have some praiseworthy level design features. I found a handful of secret rooms, and Amy’s 2.5-D platforming segments required thoughtfulness to avoid hazards.

Surprisingly, Big Red Button’s Sonic game is strongest when it’s trying to be an old-school brawler. Much of the time combat devolves into pushing Y for your standard melee-style attack, with the occasional special move using X, which varies by character. However, each character is equipped with an energy beam, which, allows players to lasso enemies to toss them around and pull off shields. In a mini-boss battle during an adventure stage, as well as the Dr. Rob—Eggman—boss stage, Sonic and his friends had use this lasso move to throw smaller baddies at the boss. The Eggman boss was the weakest combat segment and honestly a bit of a mess due to the number of enemies and all four heroes battling in the arena. Lots of damage being taken (and thus lots of rings spewing about) made things very frenetic and the game engine struggled to render the chaos. Hopefully this battle will be rebalanced before release.

As a traditional Sonic platformer….not so much. The last stage on display looked like a traditional Sonic action stage, where Sonic and his three friends run much faster through rollercoaster ramps and loops. Some sections asked the player to do “lane shifting” that 3D Sonic games have introduced in recent years via the L and R buttons. But it just didn’t feel right. The level felt like it was largely on auto-pilot (moreso than in other 3D Sonic games) and at a few points suffered from some serious frame rate drops. Also, I really couldn’t tell any difference amongst the characters available—I’m not sure I could even get Tails to hover while running and jumping through this shell of a Sonic stage.

In general the characters played similarly with subtle differences: for example, Knuckles had stronger attacks, and Amy had a triple jump (as opposed to a double jump) useful for her platforming sections. In the adventure stages, none of the characters are fast—indeed, even Sonic trots around at about the same pace you would expect of Mario, since moving fast would be more of a liability for these level layouts. But the characters don’t handle as Sonic fans might expect: Knuckles cannot glide, and Tails cannot fly (though he can use his tails to fall more slowly, I would have expected of Knuckles’ glide).

It was hard to hear the audio on the show floor, but clearly the developers are explicitly going for the Saturday Morning cartoon vibe. There’s lots of cheesy banter between the characters in-game that seemed decent enough for the target audience. Outside of the cut-scenes it was hard to tell how much was scripted and therefore unique to that segment, but hopefully the developers and writers can keep the conversations fresh and avoid too much repetition of one-liners that quickly get old. I was not able to hear the music.

Overall, this game may be an enjoyable casual two-player cooperative brawler in the vein of Teenage Mutant Ninja Turtles for NES and SNES. Initially fearing Sonic Heroes levels of frustration with the adventure stages, I found the combat far more enjoyable than I had anticipated. However, some confusing level design choices and a game engine that seemed to chug still left me somewhat wary. Those looking for fast Sonic run-and-jump action will be sorely disappointed.