Mario and Donkey Kong: Minis on the Move

And now for something completely different.

After a stint experimenting with the Lemmings concept, Mario and Donkey Kong take a new direction, this time cribbing from the Pipe Mania series of games. The primary objective of the game is to place tiles in a grid that will direct the Minis to their final destination. Mario and Donkey Kong: Minis on the Move includes four main modes, four mini-games, and a level creation and sharing tool. 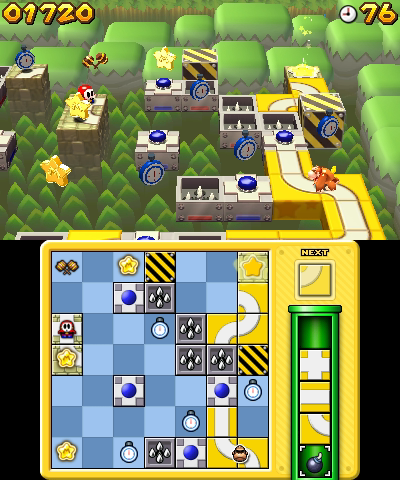 Mario's Main Event is the most basic version of play. Up to five tiles pop in on the right side of the screen and you must drag them into the level to create paths for the Minis to traverse, avoiding pits and spikes along the way. You must take care in placement so that the Minis don’t get stuck, though bombs occasionally drop down, enabling you to clear previous tiles. Each stage has three medallions to collect along the way, increasing the challenge. Minis on the Move ramps up difficulty surprisingly quickly, with a lot of competing resources to manage. You’ve got the minis running around on the board, a stack of blocks that are ready to overflow, and on top of that, a level timer. I’m sure that you’ll get into the swing of things, but taking a peek at some of the later levels without that knowledge leaves a feeling of incomprehensibility. There are a very large number of levels, though, 80 in each mode.

In Puzzle Palace, you’re given a limited set of tiles to use for the entirety of the level. The timer here counts up so that you can shoot for best times. You won’t necessarily be able to place the tiles immediately, however. You may need to wait for a Mini to clear a tile, blow it up with a bomb, and place a replacement in order to get the Mini to its destination.

Many Mini Mayhem, as the name suggests, has you arranging levels where multiple minis traverse the board at a time. Here, there are tiles that you must rotate or move around in sliding puzzle fashion. Finally, Giant Jungle only includes three boards, but they are huge endeavors to complete. These extra large boards are full of stopwatches to extend your time, which you will absolutely need to manage carefully.

The mini-games have nothing to do with the mechanics of the main game, but they are interesting, fun diversions that use both the touch screen for controls and the stereoscopic 3D effects provided by the top screen. 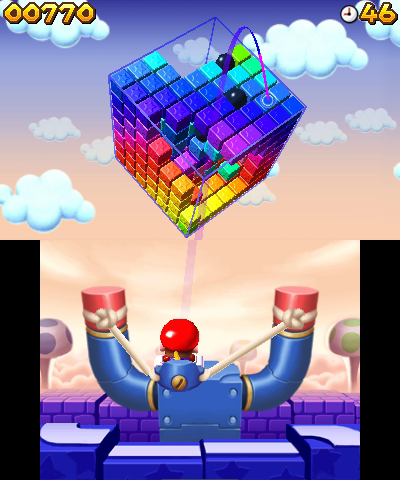 Three of the minigames are related to hitting targets in 3D space. The most basic is Mini Target Smash where you must fling Minis at targets. Various targets have different values, and ones farther away have their points multiplied. In Cube Crash, a cube made up of smaller cubes must be destroyed in a limited amount of time. Periodically, the smaller cubes will morph into bombs, which cause more destruction, or stopwatches that increase your time remaining. Fly Guy Grab is essentially a fishing game, where you must target a Fly Guy, and then quickly reel him in. The different color Fly Guys have different point values, and the rarer the Fly Guy, the more effort it takes to reel in. A golden Fly Guy captures all of the other Fly Guys on the screen, and some Fly Guys can shock you and should be dropped instead of reeled in. Finally, the reel mechanic also makes an appearance in Elevation Station. Here, you turn a crank to raise and lower mini Mario in order to grab coins and avoid Bullet Bills. 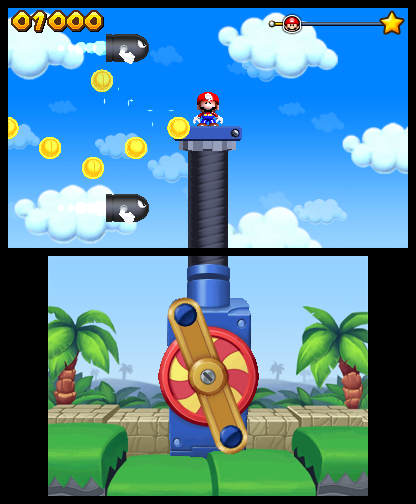 The drag-and-drop nature of the level designer makes it easy to create levels and it will be interesting to see what sort of challenges people come up with.

Minis on the Move is packed full of puzzling content. The shift to a Pipe Mania-style of game is an interesting change that suits the 3DS well, but it can be difficult to plan out your solutions quickly with so much complexity, which will probably lead to a lot of retries. The mini-games are a random, but fun addition, and the level designer is always welcome.

This looks terrible. I prefer the 2D puzzle-platforming of the older "Mario vs DK" games. This new 3D tile layout looks convoluted and confusing.

:-\ I don't know how someone could surmise that this game looks terrible from the bite sized information we have so far, especially from a non-reviewers standpoint... But you're entitled to slam a game before even picking it up, I suppose. I, for one, have never played any of these games and this one really made me take notice. It looks like the kind of spatial reasoning and directional puzzles that I love to do. If nothing else I look forward to giving it a go.  :D

I'm basing my opinion on the videos and screenshots that I've seen. The 2D puzzle-platforming of the previous games has been replaced by 3D tile placement.