The retooled PlayStation title is available now for 3DS in Japan!

In Japan, Dragon Quest is synonymous with RPGs. The height of fandom for the series has its base here, with millions of people lining up to purchase every new entry. The Nintendo DS was the home of many great games in the series, including re-releases and new spin-offs in the franchise. Dragon Quest VII: Eden no Senshi-tachi (The Warriors of Eden), the second Dragon Quest title on the Nintendo 3DS, looks to continue this tradition. It’s not perfect, but after playing a little over four hours, I’ve had a lot of fun.

Dragon Quest VII starts by introducing the player to the world of Estard, a small, quiet island that is home to a small fishing community—a place where everyone knows each other. The unnamed, green-hooded protagonist is a 16-year-old boy whose father is a prominent fisherman on the island. Shortly after the game starts, you meet the hero’s friends: the adventurous Kiefer, Prince of Estard; and the somewhat bossy Maribel, daughter of the mayor of Fishbel, our hero’s hometown. Kiefer’s constant desire for excitement drives the trio to explore some nearby mysterious ruins, which end up propelling them on a perilous adventure through time. 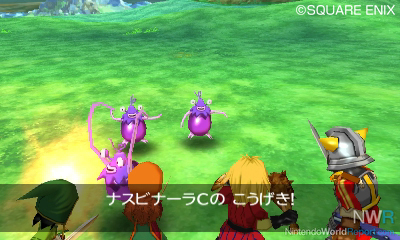 You won't see these guys until later in the game.

Before the game’s release, the Dragon Quest series producer, Noriyoshi Fujimoto, mentioned several improvements for the 3DS remake. Aside from the use of a different game engine, these included things like improving the overall tempo and pacing of the game, modernizing the leveling system to that of current Dragon Quest titles, and making the game easier to play overall. I’ve never played the original PlayStation version, so I can’t assess how well they’ve done those things, but I can say that the beginning of the game takes a little while to get going. While I found it interesting to talk to townspeople and experience the world, it was still a good three hours before I actually battled enemies.

Those familiar with Dragon Quest should feel right at home with the battle system. Battles are handled in the first-person, menu-based manner the series is known for. I’ve been able to control up to three members of my party in battle and even had a fourth that was computer controlled. As I mentioned above, having just reached my first battle so late in my playthrough, I haven’t had a chance to try it extensively. Outside of battles, control-wise, things are pretty straightforward. You can navigate the world with either the Circle pad or D-pad. The B button is used to strike up conversations, and X is used for accessing the menu. A is used to interact with things in the environment, like barrels or doors, but it can also be used for talking. L and R are used to shift the camera left or right. Even when in tight areas, such as inside a house, the camera stays the same distance away from the characters but makes the walls transparent so you can still see everything. You can maintain control over the camera pretty much everywhere, although in the Estard Ruins, I was unable to manipulate it. The fixed camera angle was fine, but this could possibly be something limited to dungeons. 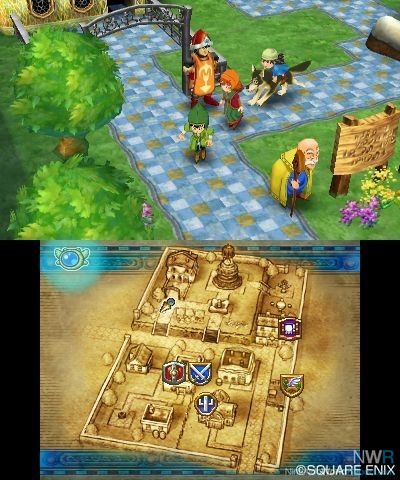 Touch-based menus and functionality are not utilized in this game. The touch screen is mainly used as a map. Most of the time, this map is an overall layout of the area, and gives the impression it was drawn on some kind of old scroll. It’s not used in every area, but it is a nice touch that matches the game’s aesthetic. Touch-based menus would have been great for managing equipment and battles, but their absence does not hinder the experience.

Dragon Quest VII is a colorful game. The world of Estard is full of bright colors, with rolling green fields, a couple of cheerful towns, and a deep blue sea. Character models feature the iconic designs of Akira Toriyama and complement the world well. That’s not to say that the game doesn’t feature darker, gloomier environments. In my time, I’ve encountered a dark, foreboding forest, as well as a set of ruins that look fittingly creepy. The 3D effect generally looks pretty good, though sometimes a bit of aliasing occurs. It’s not terrible, though, and the effect is dramatically diminished when you turn the 3D effect down or off. 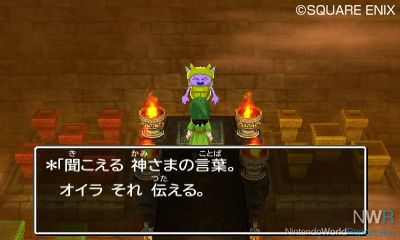 You meet this little guy in the Estard Ruins.

The music and sound effects used in the game are incredible. Featuring a fully orchestrated soundtrack, composer Koichi Sugiyama was able to get some amazing pieces reworked for the game. To add a little nostalgia to the mix, old school Dragon Quest sounds are also used for hits, various cues, and even for things like climbing stairs and opening doors. It’s a nice touch that plays on the sentimentality so many have for the series.

From what I can tell from my time with Dragon Quest VII so far, the game is incredibly deep and offers a lot of content, with fantastic art direction and sound. You also have the ability to save at virtually anytime and StreetPass is even thrown into the mix. Keep your fingers crossed for Square Enix to bring it to a region near you!

I really hope this hits the west

I never played the original either, but from what I heard, it takes 5 hours to reach the first battle, so 3 hours is an improvement!

I think it's likely that Nintendo will publish this game outside of Japan, they seem to be taking over the series.

Early report place this game already selling an million in 2 days--not bad for a remake.  Me personally, still waiting for an enhanced DQVIII--my personal favorite in terms for story and characters.

Reminds me I really need to finish up DQIX.