I rarely ever put much thought into which starter I’m going to choose when a new generation of Pokémon arrives. It’s always been the Water-type for me. Squirtle was my first love in the series, and I quickly fell for the likes of Totodile, Mudkip, Piplup, Oshawott, and, my favorite of them all, Froakie. So it comes as a huge surprise that, at least as of right now, I’d definitely be choosing Litten as my sidekick when Sun and Moon launch this November. What could cause someone like me, a Water-type lover, to abandon his roots and walk through the fire?

First of all, as many will have noticed, Litten is a cat. It’s no secret at all that Nintendo has a strange love affair with felines, choosing recently to put cat paws in Super Mario Maker, a cat suit power-up in Super Mario 3D World, and adding cats as available pets in Nintendogs. It’s also no secret that most of the Nintendo World Report staff is made up of cat lovers, and we even have cats that contribute writings about rumors to the site periodically. I, myself, recently adopted a kitten named Midna into my home. Cats in all shapes and sizes hold a special place in the hearts of many Nintendo fans, myself included. So it’s no surprise at all that a kitten would be my choice for a starter upon first glance.

The simple fact that Litten is a cat isn’t the only reason this adorable little fur ball is my choice. It’s also the most aesthetically pleasing of the three. Popplio’s design seems very bland and boring to me, and even the trendiness of Rowlet’s bowtie isn’t enough to disenchant me from the charm of Litten. The black and red fur, combined with mustache-like whiskers, and a pair of yellow eyes that just scream pure attitude add up to make Litten one of the best-looking starters to come along in a long time. 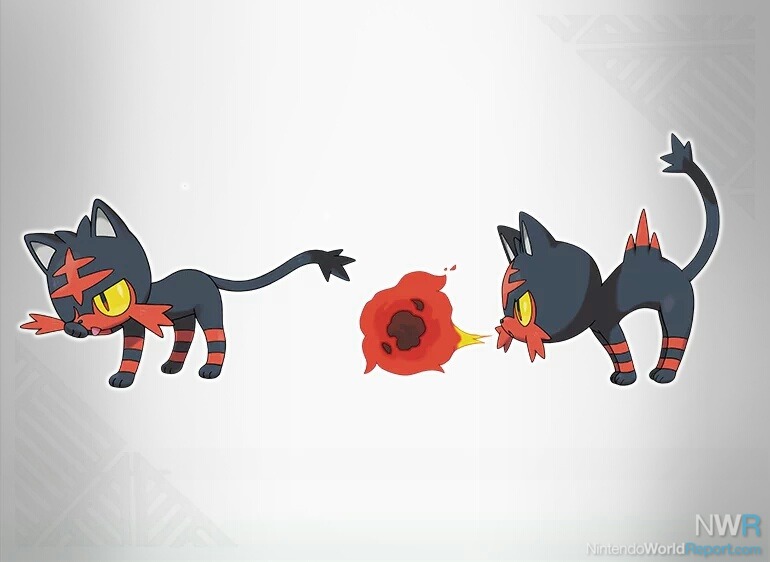 And when it comes to battle, who doesn’t enjoy the idea of Litten vomiting up fire-hairballs at inferior opponents? Fire-type Pokémon starters rarely disappoint in terms of move sets, statistics, and evolutionary forms. Not to mention Fire-types are just flat-out more useful in battle compared to the other two starter types. Fire-types are strong against four different types of Pokémon compared to just three for the other two. Fire also has far fewer weaknesses than Grass does and takes half-damage from far more move types than Water does.

If you’re looking for the complete package of battle efficiency, aesthetics, and a partner who will love you (but not be overly demanding of your attention), you can’t go wrong with Litten. But why take it from me when you could hear it from an expert in the field of Pokémon? I gave my friend, the Vermillion City Pokémon Fan Club Chairman, a call to find out what he had to say about Litten. Here’s what he had to say: “It… cute… lovely… smart… plus… amazing… you think so?... oh yes… it… stunning… kindly… love it! Hug it… when… sleeping… warm and cuddly… spectacular… ravishing… Oops! Look at the time! I kept you too long! Thanks for hearing me out!” And then he gave me a bike voucher. Nice guy.

In all seriousness, though? I love Litten’s initial design, but I won’t make my final choice until I see the final evolutionary forms of the three starters. Because that’s who I’ll be spending the majority of my time with, anyway, right?

Rowlet Leafs The Competition Behind The Case For Popplio

I always choose the fire one.

I want that Rowlet bad! Though I always tend to go for the Pokemon that seems to be least loved so maybe I'll go with Popplio.


Really looking forward to their secondary typings as well. Grass flying might hold up but would be cool if it changed into something else. A burrowing owl thats Grass/Ground would be pretty cool. Litten's Japanese name and coloring give the idea of molten rock so I would love if we got a Fire/Rock or Fire/Ground out of it. I don't know what Popplio could be, maybe it's clown theme could lend it's self to Fairy?


None of those typings are unique but with Tropious and Shayman as our only Grass/Flying Pokemon, Camrupt/Primal Groudon as Fire/Ground, Magcargo as Fire/Rock and Azumarril as Water/Fairy I would be pretty content with any of those secondary typings. Doesn't matter if they have quadruple weaknesses, they can join the 4x club with Charizard, Swampert and Torterra.


With the circus theme going we've got the clown, the ring master and I guess just the performing tiger. Not sure how those things could play into their potential typings. When I think of clowns I guess I think of fairy because of Mr Mime. With the others who knows?

I can see all three of them having cool evolutions. I wasn't a fan of Oshawott either (who had a similar circus/aquarium theme to Popplio) and couldn't see how its design could go in a good direction, but Dewott is friggin' amazing and one of my favourite Pokemon designs. They fudged it up a bit with the final evolution, but the point is all three of them can go in any number of good direction from here. I can see myself choosing either of the three after seeing how things shake out.

I can see all three of them having cool evolutions. I wasn't a fan of Oshawott either (who had a similar circus/aquarium theme to Popplio) and couldn't see how its design could go in a good direction, but Dewott is friggin' amazing and one of my favourite Pokemon designs. They fudged it up a bit with the final evolution, but the point is all three of them can go in any number of good direction from here. I can see myself choosing either of the three after seeing how things shake out.

Oshawott was based on the fisherman/merchant/samurai clothing and armor stylings.

Poplio, on the other hand, is just a big, dumb clown seal.

They all suck, don't think ill use the starter this gen, which makes me really sad.

They all suck, don't think ill use the starter this gen, which makes me really sad.

Lucario you are a booty head.

Someone didn't eat their BootyOs