Neal Ronaghan: So, with the logo being revealed, it looks like Mario Kart 7 is 100 percent the real name of the 3DS version of the game. Outside of the obvious knock that this is technically the ninth game in the series (there were two Namco-made arcade games), it seems odd to start numbering a series after 20 years.

Karl Castaneda: It sits fine with me. I like "Mario Kart 7" more than "Mario Kart 3D" and it ultimately just makes the series easier to follow.

Andy Goergen: It reminds me a lot of the nonsense that was Guitar Hero 5. Not that I'm implying that Mario Kart is on the way out like Guitar Hero is, but it does show a lack of creativity. At least with Mario Kart DS and Mario Kart Wii you knew what console it was on.  Now you can't even get that much information.

Neal: Guitar Hero 5 wound up being the best game in the series, so maybe we'll be fortunate and have the rogue numbered Mario Kart game blow our minds.

Nate Andrews: I actually don't mind it as much as I thought I might. That said, it's still a naming convention I wouldn't expect to associate with Nintendo, outside of the Mario Party series.

Andy: Only two games in the series have had names that imply anything about the game at all besides which console it's on: Mario Kart: Super Circuit and and Mario Kart: Double Dash!!!!!!

Really, this should be anything but surprising.  Mario Kart 3D was the obvious name, but I'm happy with literally anything else.

I think personally it's time to go the Smash Bros. route and bring Link, Fox, and Kirby into the fray.

Karl: I'm with Andy. A Smash Bros.-style approach is just what Mario Kart needs. Let me rocket around on a a Bullet Bill in Hyrule Field. 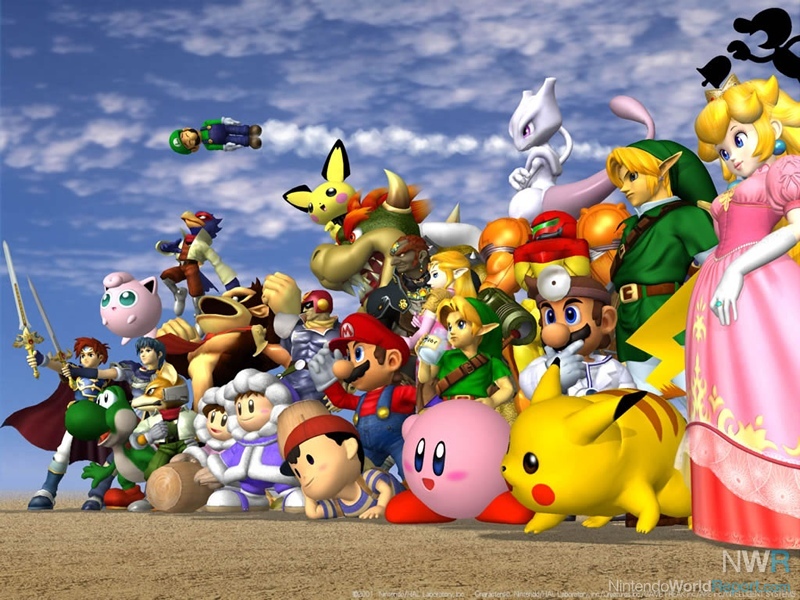 Now imagine them all at a starting line with karts.

Neal: What other items could we bring in from other games? Boomerang item that functions kind of a like a shell and a ghost? Or maybe Link could just rock the Spinner from that temple in Twilight Princess.

Karl: Items you could bring over:

Andy: Obvious Zelda item would be a bomb!  Kirby's could be an item which allows you to absorb items from other karts.

Nate: I'd like to see some F-Zero crafts in a cute little cart form, merry-go-round style.

Neal: Someone didn't play that much Mario Kart Wii. There actually is a Blue Falcon kart that you can unlock. It's likely the best kart in the game.

Nate: Someone didn't play any Mario Kart Wii. I just want a full-size Captain Falcon sticking out of a comically undersized Blue Falcon like a kid on a carnival ride.

Scott Thompson: Link's kart would look like it was put together with parts from a horse on a merry-go-round in order to closely resemble Epona. A horse head would eerily jut out of the front of the vehicle.

Honestly, I'm fine with the title. Like has been noted, I prefer this title to one ending in "3D." I wonder if this isn't a calculated choice considering that little kids aren't supposed to use the 3D feature on the 3DS for fear of liquefying their eyes, and this title will appeal to a lot of little kids. Perhaps a way to reassure worried parents that it doesn't have to be played in 3D, even though we all already know that? Color me passively curious!

Neal: That does make sense, but then does that mean Super Mario 3D Land (another weird name) is meant for older kids?

Scott: Oh you guys didn't get the memo? Super Mario 3D Land is getting an M-rating. Apparently it gets pretty graphic.

But yeah you're right. Maybe Mario 3D Land isn’t going to draw quite as young of an audience? Plus they might rationalize the 3D there as being "it's not side scrolling, it's 3D!"

James Charlton: It should be called Mario Kart 3DS. 20 years from now we'll be all saying "Mario Kart 7? What the hell was that on again?"

I'm also up for changing it to "Super Smash Kart Racing" and getting rid of the ridiculous constrainer only allowing Mario characters. Remember people, Toadette exists.

Matt Walker: It's a good name. Simple, easy to understand. How many properties made in the West would use names like New Super Mario Bros. anyways? Admittedly, Mario Kart doesn't follow the convention, but Japanese companies are usually horrible at naming their properties because of their perverted understanding of the English language.

What we should really be focusing on is whether it's a big deal they're acknowledging this is the next real Mario Kart game, as opposed to some watered down offshoot as is often the case with portable iterations of games in other series.

Andy: I would say that Mario Kart DS was also a full iteration of the series - in the eyes of many it's the peak of the franchise.

Neal: While I can't say I'm on-the-edge-of-my-seat excited for this game, I think it'll be fantastic. Throw in some cool StreetPass/SpotPass ideas, a solid online mode (a mildly altered version of Mario Kart Wii's system would be fine), and I'll be there day one.

Andrew Brown: Isn't there some connotation with 7 being a lucky number in Japan?  I think the name Mario Kart 3DS, despite the obvious connection to the console it's on, could cause some customers (read: uninformed parents) to say "Oh, but you already have Mario Kart DS, you got it for Christmas a few years ago," resulting in lost sales. The title is similar enough to cause confusion, and some may also think it's just a 3D port of the original Mario Kart DS.

Matt: As an old school SNES gamer, having all of the tracks from Super Mario Kart in Super Circuit was a childhood dream come true. Being able to play the entirety of the original on the go was incredible.

That being said, I would say the now standard concept of the classic tracks being features in a Mario Kart game is starting to become stale.

Is there anything they can do to freshen that idea up aside from giving it to us in 3D?

Neal: I think the concept of classic tracks won't get old. They haven't repeated retro courses yet, and usually the new mechanics of the game alter the way you play it.

Matt, your last question was answered during E3.

Andrew: Just remember that Mario Kart Wii's version of some of the Double Dash tracks added a few new ramps and secret areas, as well as a few halfpipes to perform tricks on. I'm sure classic tracks, this time around, will feature secret underwater sections or areas where you can hang glide over obstacles.

Matt: My last question is about classic tracks. I'd say they've reused most of the best ones by now, hence asking for opinions whether or not they can spice up the classic tracks themselves.

I guess my big complaint is just that it's expected now. When they first did it with Super Circuit it felt like they were doubling the value of the game. On Double Dash it was an interesting prospect that they chose to turn the concept of separate classic cups from all of the tracks in Super Mario Kart to a smoargasboard of classic tracks from all of the games.

Now it feels like the formula is stale- it's something we expect.

Josh Max: I just don’t get what's wrong with calling it Mario Kart 7? It's the seventh game in the Mario Kart franchise (technically). Seven is a kick-ass number and is usually associated with luck. Maybe we'll get lucky and this will be the best Mario Kart to date?

Aaron Kaluszka: Mario Kart 7 reminds me of Windows 7 -- After a string of things not using version number, the 7 comes out of nowhere. The 7 also does imply the disownership of the Namco-developed Mario Kart GP Arcade series, which is an interesting move. I still wouldn't be surprised if they changed it, though. Mario Kart: Super Circuit was called Mario Kart Advance in Japan, for instance. The 7 seems lazy. Heck, Miyamoto's idea of Super Mario Kite is cute and could work.

With this version of Mario Kart, they seem to be into vehicle parts customization. For the next iteration, I'd like to see a Super Smash Kart with not just parts and add-ons (perhaps like what Skyward Sword will do?), but with vehicular damage.

Zach Miller: I theorize that the name implies a full-on return to glorious Mode 7.

With Retro Studios helping out in the game we have a chance to see Samus, and it would be lovely to use her as a playable character on her ship, like you guys said, kind of like on a mary-go-round . I once had the idea of a track featuring Sky Town or Valhalla. Oh and instead of the Hook Shot we could see the Grapple Beam.

I don't think the arcade ones count, those were little more than side-games. I disagree with Karl, Mario Kart 3D is a better name and fits in with the naming convention used by every game in the series other than the GCN one. Andy, this is not at all similar to Guitar Hero 5. Of the first 5 Guitar Hero games, only the fourth one wasn't number (besides the first of course): Guitar Hero: World Tour.

I didn't respond in time to get my opinion in this, but honestly, I don't care either way. Mario Kart 7 or Mario Kart 3D or whatever, it's the same game. I doubt it'll have any impact on sales, and people will probably just refer to it as "Mario Kart" anyway, so it doesn't matter to me.

I was out of town so I wasn't able to respond, but I actually like the name. Although if it had been up to me I would have kept it simple with the name Mario Kart.

As for the Smash Bros' route, I really hope they do that on the Wii U. I'd love to play as Samus in a miniature version of her gunship.

That Logo Needs something.  I just can't put my finger on what.

simply putting smash bros characters in mario karts is an injustice to both series. if it happened nintendo would have to pull it off in a way that it would distance itself enough from both franchises that it would be pooling fans from both kart and smash, not taking away from them. the name mario and the accesibility of mario kart is what gives it a larger audience. a super smash kart would have to appeal itself to younger gamers while also providing  the depth that fans of super smash brothers are accustomed to. that and be a new expierience. it would be tricky to pull off

I'd say it's interesting to note that Nintendo is giving a Mario Kart sequel a numbered title, but not all that interesting to talk about it.  It's portentous of nothing.  Just a "huh, look at that" kind of thing.

I have mixed feelings about Smash Kart.  Adding more characters and their associated locales for tracks could be fun, but it wouldn't really change the game much.  I'd be worried they'd feel obligated to add new items based on the new characters, and the series is getting too item-rich already.  I'd also worry that they'd let the novelty carry the game instead of making it, you know, good.

I'd say it's interesting to note that Nintendo is giving a Mario Kart sequel a numbered title, but not all that interesting to talk about it.  It's portentous of nothing.  Just a "huh, look at that" kind of thing.

Hence why our conversation veered off in other directions.