The Legend of Zelda: A Link Between Worlds

If you only choose one thrilling ride this holiday season, it should be this one.

The last couple of years the new Zelda games in the series focused on presenting the world in exciting ways. While I enjoyed the efforts of Skyward Sword, I wasn't overly taken by it as I hoped I would. With that in mind, I was in utterly excited when The Legend of Zelda: A Link Between Worlds was announced, and for obvious reasons. While I was worried that it could potentially harm my love for A Link to the Past, I am happy to report that is the first Zelda title in a while that I am truly fond of.

A Link Between Worlds doesn't stop pulling punches from the moment you decide to begin and it makes an extremely interesting first impression. After a brief introduction you are thrown into a dungeon and make your way across all the bits it has to offer. The game doesn't stop you to give you a full understanding of what needs to be done, but lets you use your own approach. At the same time, the game doesn't close its walls for the beginners. If you are stuck, you will be able to use special hint glasses that will always guide you towards the right path. 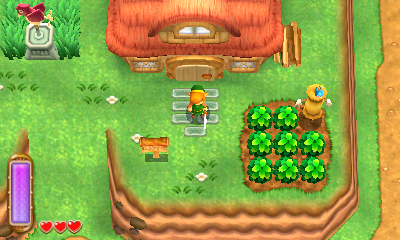 After the initial dungeon, you already start to feel that the game is leaving Link’s destiny in your own, capable hands. In the humble early hours, you are still guided to two separate dungeons to perform some specific tasks, but you can do them in any order. After that point, you will be taking it all on in whatever order you choose. This goes hand in hand with the fact that you don't find the items in the dungeons anymore, instead using a rental system from a new character named Ravio. It gives an unprecedented feeling of freedom, though you might feel lost at the wealth of it. It is easy to find yourself doing whatever you like, but it is little difficult to find your way back.

The item system also gives players the ability to explore the world map at a very early point in the game. You can walk about in the world and find plenty of cool goodies to keep you on your toes. If you are ready to take on a dungeon and want to know which items you need there are usually visual elements telling you which one to use. It takes away a lot of the frustration, but don't go in thinking that this will be an easy adventure. The game is still filled with puzzles, combat situations and many things that you will leave you wondering what is next. What helps is that the action is well paced and the sense of adventure never stops. The game goes by much quicker than a lot of games I’ve played lately, and engages the player throughout the entire experience. 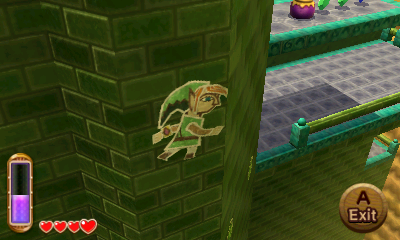 In between everything that is old and new in the title, there is a new mechanic which has been a center piece since the reveal. This is the ability to turn yourself into a wall painting and it is used in some very impressive ways. With this transformation, Link can move across terrain and walk along walls, which makes way for exciting new undiscovered places. I was amazed at how well it is used in dungeons and even more by how it is implemented in some of the many boss encounters. Link’s new ability absolutely shines in the game, and I was always working towards the next opportunity to make use of it.

These elements also reveal something way bigger about the game in general. While you think that you may know the world of A Link to the Past very well, A Link Between Worlds shows you a bigger picture and gives you places which are still a mystery to even veteran players. You will find characters and elements which are inspired by the beloved first entry, but the new elements bring in plenty of exciting content. The story isn't as strongly presented as in the previous entries, but I still enjoyed it thanks to the intriguing dialogue. 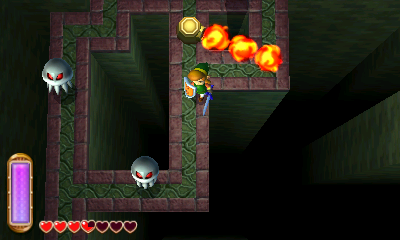 The art style of The Legend of Zelda: A Link Between Worlds is something that has been heavily debated. My personal take on it is that it finds a correct balance between familiarity and opening some interesting new ways to the future. Sometimes it makes me think of when I was just a lad, but it does offer the smoothness and more clear definition of a modern Nintendo 3DS title. The 3D effect also helps players find their way around dungeons, and it looks great. It gives everything a nicer edge, which is kind of crazy for large game like this. The same mentality is also applied to the music, which offers remixes of A Link to the Past classics, but also finds paths to reach 3D Zelda levels of excellence. It isn't quite orchestrated, but it’s pretty good regardless.

The Legend of Zelda: A Link Between Worlds goes back to a time when everything was speedy and a lust for adventure was never taken away. It is hard when you go up against a classic like A Link to the Past, but this game does it in perfect fashion. You may lose yourself in the wonder of it and the story might not be as strong, but these points don't take away the fun you will have. The presentation, the gameplay and the dungeons make it a packed ride that will keep you intrigued for many, many hours to come. This is the best new Zelda title in quite a while and another incredible victory for the Nintendo 3DS.

Can you (or any of you NWR people that have played this new game) tell me, I hadn't played a Zelda game in a long time. Currently I'm LOVING my first play-through of Wind Waker and I'm wondering if this will be on par with that.
I have my finger on the Best Buy Pre-order trigger and I need to choose soon because if I get this game I want the pre-order bonus. I still have the Oracle of Seasons cartridge, but I never had Ages so if I buy this getting the bonus would be nice.

A few questions on item rental. How long does the rental last? Can you at some point buy them outright? Did you ever find yourself needing to grind for rupees to pay for rentals?