Game & Wario is a game that sort of fell under the radar. Co-developed by Intelligent Systems and Nintendo, the game was nowhere to be found during the press conference, instead saved for a reveal on Nintendo's E3 site with a short description and some images. Of course, since this is a preview, expect everything on the official website to be promptly ripped apart.

The game itself is listed as a "party" game that includes a collection of games inside of Wario's Diamond City in the WarioWare universe. Now, they distinctly said the new title "retains the original flair and character of the micro-games from the WarioWare series," without saying that micro-games are in it. Since this does not carry the WarioWare branding, and the word "games" is separated from its "micro" prefix, it seems like we might be dealing with a mini-game collection. 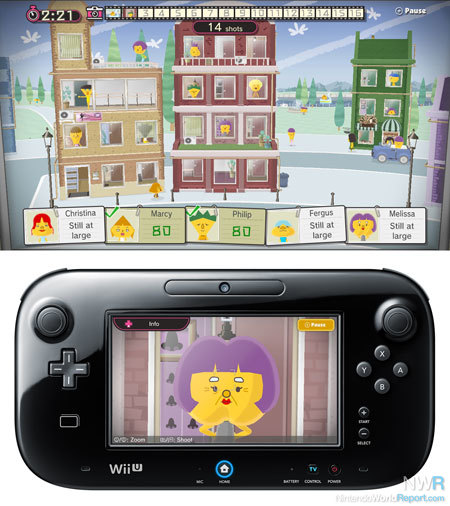 Like almost every WarioWare game, Game & Wario clearly attempts to focus its design around the new functionality of a given Nintendo console. For this title, the Wii U GamePad is clearly getting a significant push. On the website, four games (out of an "additional" number to be detailed later) were shown off.

The first is called "Arrow." In it, the GamePad is transformed into a mustache-shaped bow designed to defeat enemies from afar. To play, players aim the GamePad (vertically flat) at the TV with one hand while using the other pull back on the touch screen to fire the arrow. Since the term "Stage 1" is used, and considering how many enemies are on the screen at once, it is safe to assume  these games are longer than standard WarioWare fare. There are also lives, which means  this game might not be long enough to warrant continues, and may be more like a traditional Game & Watch game where the player is actively playing until they lose. 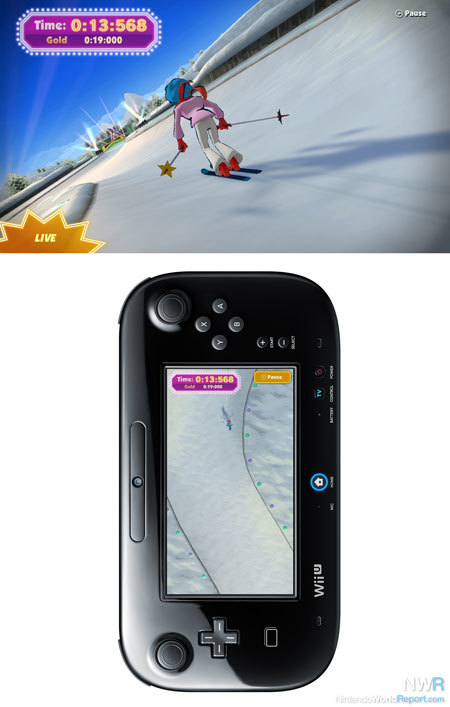 In another single-player game, Ski, competitors must guide the character (Jimmy from the WarioWare series is shown off in the screen) down a slope by holding the GamePad vertically and tilting left or right. On the GamePad, an overhead view of the skiing course can be seen. On the TV screen, it is clear players can earn medals by aiming for certain times, and that the game seems to give a television-like feel, with the word "Live" in the lower left-hand corner.

The last single-player game listed is called Shutter, in which the GamePad has to be pointed at the screen (like a camera lens) while players search for a number of criminals (it seems like 16 had to be found within the screenshot) within the time-limit. It looks quite a bit like that tech demo from last year where Mii's had to be found in similar looking windows. 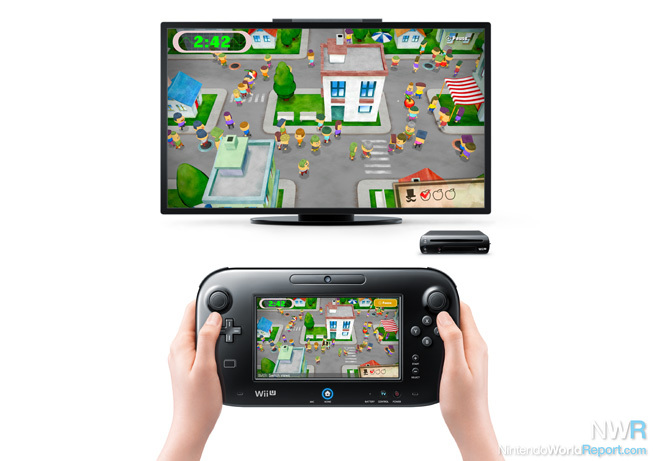 The final game listed is called Fruit, which currently stands as the most interesting one of the four. The reason for this is that, unlike the other games, which are listed distinctively as single-player, this game is only playable by two to five different people. Fruit takes place in a top-down third-person view, in a town filled with many people. In the game, the main player must try to steal fruit scattered throughout the town by blending in. After they steal an amount of fruit (though it looks like three might be the magic number), other players must attempt to pinpoint which townsperson stole the fruit. With this title, it seems like Game & Wario may attempt to provide unique experiences for both one and multiple players.

Although a release date isn't set, Game & Wario is listed on Nintendo's website as "Launch."