We're extending the current Hot Topic another week. If you want a shot at winning an E3 swag bag, all you need to do is tell us what you thought of the show!

We skipped last week for the sake of E3, and this week we're gonna come right back and ask about it! Like always, we'll get back to the previous hot topic down at the bottom of this page, but first...

This week: E3! What did you think of the show in general? The press conference? The announcements? Nintendo's competitors? Are you satisfied overall? Or super disappointed? Let us know!

What we're giving away this week: 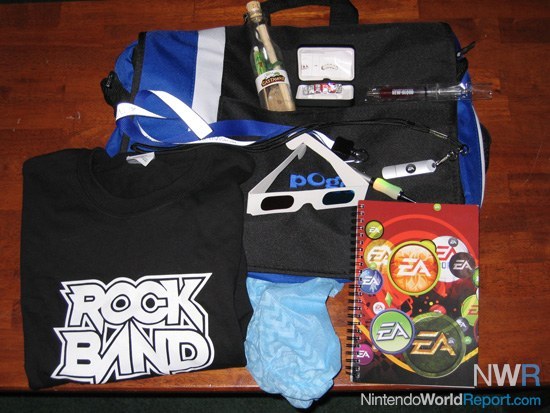 Reminder: We can only ship to the U.S. & Canada. Posting multiple times will not increase your chances of winning, and spamming posts, breaking the forum rules, or otherwise being a terrible poster may disqualify you or get your account banned. Be sure to check the forum rules before posting. And you can't post if you're not a member of our forums, so if you want to get a chance to win a prize, register now!

Before E3, we asked about the then-just-revealed assist trophies in Smash Brothers Brawl, and what our forum users would like to see. Also, I just now picked somebody to randomly win a Super Mario Bros. Super Show DVD, and it's Mashiro! Now, here's a fine layer of posts from beneath the Earth's crust:

It would be somewhat weird to implement but I would love to see an Eternal Darkness Assist capsule.

Maybe have one of the monstrous creatures appear out of it and if the opponents get in a specific range their character will react oddly much like your character would in ED when your sanity meter went down.

Maybe one effect would be that it seems your character is smashed off the stage but he really isn't. Another could be you lose control of your character and it seems like he just walks off the edge of the stage. Reverse controls could be another effect.

There's a lot of different effects they could do with this and I think it would be fun and definitely add to the hectic nature of the game. Oh and of course we have to hear the standard "This . . . . isn't really happening!!!" after the effect is done.

Kururin will probably end up there. He won't be playable due to lack of popularity but there was a trophy of him (or the Helirin, at least) in SSBM so he could probably appear out of an assist ball. Attack would be easy to guess considering he flies a helicopter with huge blades...

I like Masahiro's idea of Eternal Darkness Assists...imagining Xel'lotath or however coming out and driving them all insane would be...well...insanely funny, but unfortunately I don't believe that would fit in the spirt of the Smash Bros. games...I think assist trophies/characters should only consist of characters that the player has had to interact with...and while I'd argue that most should be characters that have been enemies of the player, the Nintendog is an obvious fact that that is not going to happen, so I will state it as any more formal interaction the player has had with these characters. And with that being said...

Whatever happened to the Koopa Kids? I'm tired of this Baby Bowser crap, I miss the Koopa Kids of SMB3...they would be a great assist trophy...heck, they can use their stolen wand...or even the airships? Or just their individual attacks from the game. I probably miss them as enemies more than any other character...by the way, weren't they in the Super Mario Super Show? If only I had some way to find out...oh well, DO THE MARIO

Swing your arms from side to side

Come on it's time to go

Take one step, and then again

Let's do the Mario

If you can pick up and use all 57 F-Zero Assist Trophies at once, the entire cast performs Grease over the course of an hour, and the player who applauds the most (either by slapping the nunchucks together or tapping any button rapidly) wins a date with Perrin Kaplan.

vudu would like to see Von Bolt from Advance Wars DS as an assist trophy. vudu thinks Von Bolt's Ex Machina attack would be perfect for doing some damage and then freezing opponents for a little while, allowing the summoner to get a few extra hits in. However, vudu thinks that like in Advance Wars DS, the player wouldn't be allowed to directly aim the attack; therefore, he would have to be sure to get the heck out of the way or else fall victim to the might of Ex Machina.

Everyone knows that Sturm is still infinitely cooler.

My number one idea for an Assist Trophy would be from the Metroid Prime game, but not a Metroid, like has been suggested. I would actually prefer to see a Flying Space Pirate. If you remember in the game, those guys were crazy, shooting missles everywhere. Also when you killed them, they would target you as they crashed back to the ground. They could do that when it was time for them to "leave" so to speak. I think a Flying Space Pirate would fit very well within the Smash Bros. universe as an Assist Trophy.

This is the kind of topic where if you don't pop in on the first day all the good ones are already taken.

As already mentioned, both Tingle and Fawful need to be assist Trophies. There's no getting around this. I'm sure we'll see both Gorons and Zoras represented.

Click some super popular threads to see what all the hubbub is about!

Nintendo Console Discussion - Was anyone else disappointed by E3 this year?

Bah, I thought I'd get honorable mention for thought of different kinds of assist trophies. I'm convinced SUPER didn't read past page two...

And I do believe that it's "Everyone do the DINOSAUR", but of course there could be multiple takes on that....

And Sturm would be cooler than VonBolt and could have just as cool of an assist calling forth a meteor shower.

I'm featured in the finest posts twice in the same week. Not even thatguy can claim that. Although, vudu thinks his first post doesn't make much sense without seeing the post immediately above it in the original thread.

Quote
And Sturm would be cooler than VonBolt and could have just as cool of an assist calling forth a meteor shower.

Sturm is infinitely cooler than Von Bolt. However, in Advance Wars the Ex Machina has the added capability of making the victim lost the ability to act for one turn; Meteor Strike doesn't do this. For this reason alone, Von Bolt would be a better assist trophy.

Nah, SUPER didn't like this one. I didn't either, so I didn't try to make a pretty post this time. I don't think SUPER tried to pick to many, either.

Quote
Originally posted by: vudu
I'm featured in the finest posts twice in the same week. Not even thatguy can claim that. Although, vudu thinks his first post doesn't make much sense without seeing the post immediately above it in the original thread.

Quote
And Sturm would be cooler than VonBolt and could have just as cool of an assist calling forth a meteor shower.

Sturm is infinitely cooler than Von Bolt. However, in Advance Wars the Ex Machina has the added capability of making the victim lost the ability to act for one turn; Meteor Strike doesn't do this. For this reason alone, Von Bolt would be a better assist trophy.

I guess on top of that idea it would be cool if the opponents froze for a small period of time, potshots causing harm but no recoil (cannot be moved out of place). A tactic would then be to try and get frozen in midair (in the split seconds before the trophy "attacks") to make those potshots harder to land. The tactic of the caller would be to try to land a powerful shot just as the effect wears off to send them flying....

Quote
Originally posted by: IceCold
What about Fawful?

He would have fury.

I still can't believe you didn't include my mention of Waddle Dee. I mean, he's just so...useless. He'd be the perfect Goldeen.

Ty, I demand you edit this Hot Topic and Weekly Forum Roundup!

Quote
Originally posted by: IceCold
What about Fawful?

He would have fury.

With mustard ... the mustard of your doom!

I still think Ty needs to edit one of my posts in there. Let's say we protest somehow!