Bringing face-plants and bone-crushing wrecks to a 3DS near you!

Urban Trial Freestyle hit the 3DS last week, and we had the chance to sit down and chat with Paul Leskowicz, VP of Tate Multimedia about it.

With similar titles making waves on other platforms, could Urban Trial Freestyle finally bring the genre to NWR's favorite 3D handheld? Well, you'll probably have to read our review to figure that out, but we still learned quite a bit about what went into making the game!

NWR: Compared to other services like the PlayStation Network, how has the experience been working with Nintendo to release Urban Trial Freestyle on eShop?

Paul Leskowicz: Similar to Sony, we have had a fantastic relationship with both Nintendo America and Europe —the staff have been very helpful at all levels allowing us to release Urban Trial Freestyle according to our schedule and on the same date in Europe and North America.

Tate Multimedia has a lot of experience (14 years) with console manufacturers: Moving to self-publishing for our title has been an easy step thanks to our long term relationship and trust with Nintendo and Sony.

NWR: Do you feel that Nintendo has been more welcoming of smaller and indie developers in recent times? 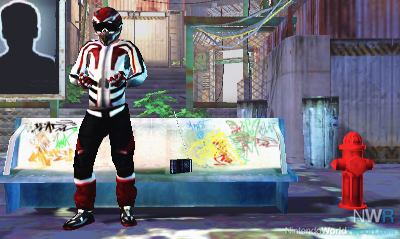 PL: We do consider ourselves an independent developer but we’re not new to the industry. We have built a solid relationship with Nintendo for many years now and releasing Urban Trial Freestyle ourselves is only a new step in our evolution. The real change for us is the direct access to the digital download eShop, which provides us a simplified process in releasing our game to the worldwide market.

NWR: Urban Trial Freestyle has been compared to games such as Trials HD, what sets it apart?

PL: Of course we are inspired by many titles based on the trials genre.  However, if you spend some time with UTF, you will see that it’s very different from the competition and has a lot to offer.  UTF’s environments, motorbike physics and gameplay features differ a lot, as well as its online features and game modes.

We have worked very closely with Julien Dupont, a godfather of trial sport to capture this unique urban-freestyle look and feel of the game. UTF also has many unique features, like billboards with Stunt Masters - the system presents best players on special billboards placed on tracks. The highly anticipated Track Editor as 3DS console exclusive allows players to create their own levels with unlimited possibilities.

NWR: Are there any features that will be exclusive to the 3DS version compared to the PlayStation 3 version? What about the Vita version?

PL: Urban Trial Freestyle for Nintendo 3DS features the highly anticipated Track Editor as console exclusive, allowing players to create their own levels with unlimited possibilities. Of course stereoscopic 3D is also exclusive to 3DS and brings a real additional fun to the game.

NWR: Urban Trial Freestyle is stated to be heavily influenced by Julien Dupont, what portions of the game did he most influence or oversee? 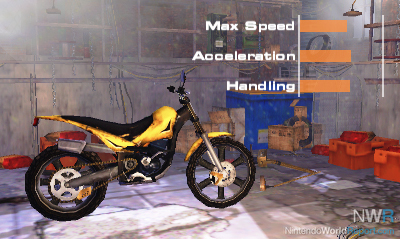 PL: Julien Dupont has been very helpful in the game development and very picky especially on the bike performance.  He wanted the game to be very realistic and have a strong freestyle aspect. We worked a lot together on the stunts implemented in the game – making them as similar as possible to what he does on the streets.

NWR: Can you tell us more about the Track Editor? Will there be a way to share tracks created in it?

PL: Basically you start with an empty décor and you add objects to build up the ramps and obstacles that you want. There is a selection of over 150 objects, from planks and crates all the way up to trains and bridges, which you can use to construct your course. Objects can be positioned, scaled and rotated, either individually or as groups, and you can duplicate sections you’ve already made and reuse them further down the track. All this is done using the tactile screen and a couple of icons, so it is really easy to do.

NWR: Tell us more about the customization present in the game; do different parts cause the bike to perform differently?

PL: The more you progress in the game the more you unlock parts for your bike influencing different aspects, from power to handling, grip etc.

NWR: We're very excited to see Urban Trial Freestyle hitting the 3DS; would you ever consider porting the game to the Wii U eShop? 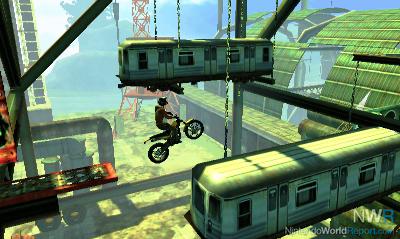 PL: We’re of course thinking about this but no final decision has been made yet. Bringing the game to Wii U will require new ideas and enhancements to fit Wii U specific features.  We promise to keep you posted!

NWR: Any plans for a sequel or expansion?

PL: We are working on some new stuff around trials mechanisms and would like to enhance the stunts factor of the game, but there is no rush with the sequel as there are still a lot of players that we hope will discover our game since the game is just releasing now on the 3DS.

Can you ask about Kao the Kangaroo and if they'll bring him to 3DS or Wii U?