Shovelware: An Interview with Yacht Club Games About Shovel Knight, the Art of Jumping, and Working in 8-Bit

We get the dirt on Shovel Knight from Yacht Club Games' Sean Velasco.

Shovel Knight is tearing it up at Kickstarter. What started as a $75,000 ode to 8-bit games has become a beast of success, one that will lumber its way to the Wii U and 3DS eShop by the end of the year. As of this writing, the campaign has raised over $230,000, and still has just over two days to go (you can pledge to the Kickstarter, or alternatively through PayPal until April 30). The debut effort of Yacht Club Games, Shovel Knight is a 2D side-scroller that draws inspiration from your favourite games, but carves its own path with modern sensibilities.

We talked with Sean Velasco, one of the company's founders and former WayForward employee. Sean has worked on many titles, including Double Dragon Neon, Contra 4, and A Boy And His Blob. 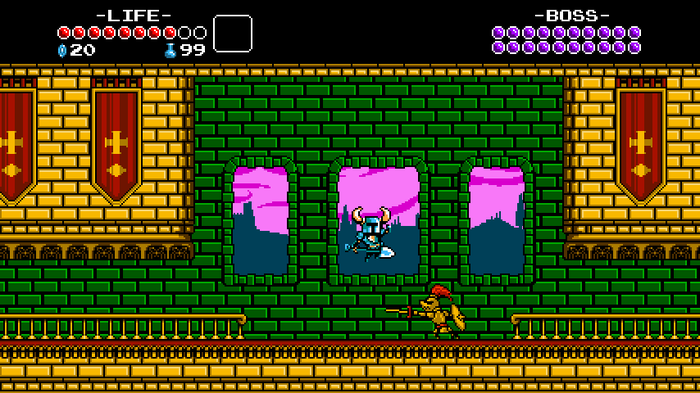 Nintendo World Report (NWR): To start off, congratulations on meeting your Kickstarter goal. While there is a lot we want to know about Shovel Knight, we have to ask, what's the story behind the Yacht Club Games name?

Sean Velasco (SV): Yacht Club Games is the name you give to a bunch of cravat-wearing dudes who are just in it for the money. Basically, it's playful arrogance, and it's pretty much the opposite of what we are. We're the world's most inclusive Yacht Club!

NWR: With just six months to go, is it going to be difficult to deliver Shovel Knight by September? Are your stretch goals and commitment to bringing Shovel Knight to three platforms adding any wrinkles? 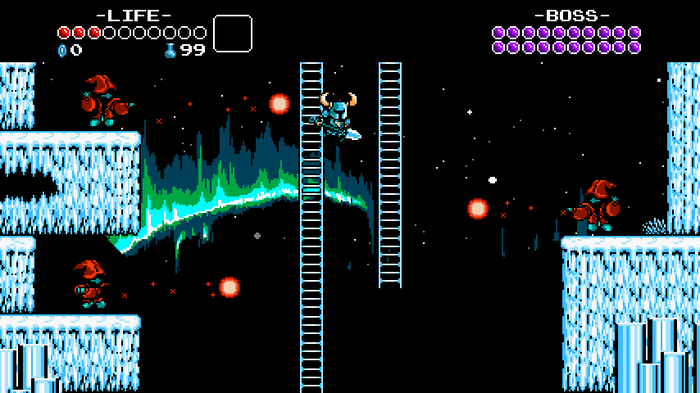 SV: September was already quite an aggressive goal, and the stretch goals will probably miss that initial date! If that's the case, we plan on releasing a free update to Shovel Knight with the new content. Additionally, more platforms (like Mac and Linux) will take a bit more time. Know that we are committed to making the best game possible, and we also want to make sure it gets into players' hands in a reasonable amount of time.

NWR: While suspected from the start, your Wii U and 3DS announcements came after the initial pitch. Why was that?

SV: The simple fact is that we had not yet received official word that we were Nintendo developers, and we didn't want to announce it prematurely. However, our approval came in quickly and we announced Wii U and 3DS support soon after the campaign began. But wasn't it dramatic? 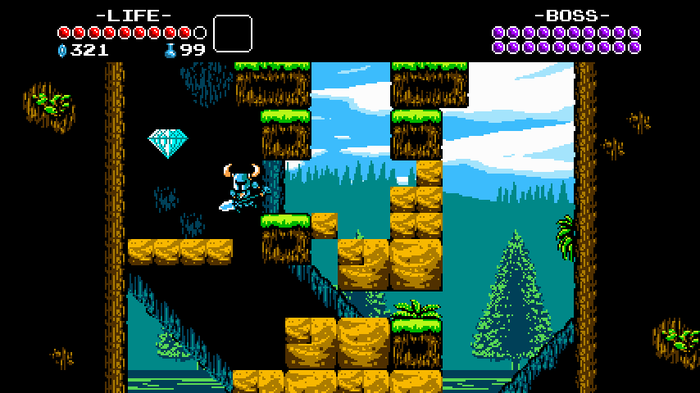 NWR: What's the studio's reason for supporting the Nintendo eShop?

SV: As an 8-bit game, we felt strongly that Shovel Knight belonged on Nintendo platforms, so the eShop made perfect sense! That said, we are also excited to bring Shovel Knight to as many platforms as possible.

NWR: When you made your intentions for the eShop clear, did you notice any bump or increase in pledges?

SV: Absolutely! It was our biggest pledge day since the first day for a while. Now that we are in the final stretch however, that day has been obliterated with some truly incredible pledge days. Other than the end-days boost, collaborations with other Kickstarters and live streams / YouTube videos have helped our visibility a ton! It's been both amazing and humbling, and we are ridiculously, unbelievably thankful!

NWR: Can you share what you intend to do with the Wii U and 3DS versions of the game? Off-TV Play, Miiverse integration, StreetPass, things of that nature.

SV: We definitely want to do Off-TV Play. Miiverse integration also seems cool (loved that feature in NSMBU) but we haven't decided on the specifics. Of course, the 3DS version will be full-on stereoscopic 3D, which always looks amazing on 2D games. As far as those other screens go, we aren't sure yet... but not just a map, we promise!

NWR: You're drawing inspiration from many classic NES titles, all of which are noted for their difficulty. Are there any difficulty settings in Shovel Knight for those of weaker hearts?

SV: We want to keep Shovel Knight at a single, balanced difficulty that works for all players. We're hoping that the game can test your mettle, but not be so "Nintendo hard" with random cheapness or anything like that. However, in the Challenge Stages (our 180K stretch goal!) it's going to get crazy.

NWR: When you mention titles like Mother 3, Mega Man, and Castlevania, is there any concern over expectations of how Shovel Knight will turn out?

SV: Mentioning these games in the same breath gives us big shoes to fill, but we want to honor these games by making Shovel Knight both great and unique. We have such an amazing team that works so well together that I'm not too worried about the game's quality. Still, yes, it's quite intimidating, especially with so many people excited about the game!

NWR: While the staff comes from a studio known for its sprite work, a lot of it has been outside the confines of an 8-bit system. What are the difficulties and privileges of working with an 8-bit aesthetic?

SV: Working in pixels is somewhere between art and math. You can place a pixel in very few spots because you are working at a tiny resolution; one pixel moved makes an enormous difference. Add to this a limited color palette, and the selection of possibilities is further reduced. This turns every enemy, boss, and animation into an interesting art problem because it's tough to render details. But once you get into the flow, sometimes it goes really fast. Because we're working in a faster medium than even 16-color sprites, we can create more content, iterate faster on animation, and add variety to both characters and backgrounds. So, it's sort of easy and hard at the same time?

NWR: Something that's always interested me in a platformer is the physics behind its jumping. Is it difficult to find what works best for you? There's a lot of room between what we feel in Mario and Mega Man's jumps. 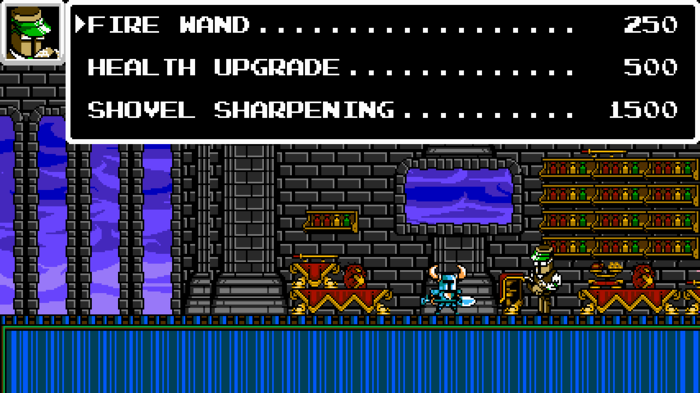 SV: That's an awesome question! Jumps are some of the deepest and most important mechanics in video games, and you are correct, they have a TON of differentiation and take a ton of tuning to get right. A jump often works in tandem with walking and running, which is where much of the fun comes from. Mega Man slides when you stop running, but stops on a dime when landing from a jump. Ghouls n' Ghosts has a 'canned' double jump where you cannot change trajectory, only facing direction. Mario's jump has very weighty physics, as does Link's from Zelda II. In Castlevania, the height and distance of the jump are both fixed! You could probably write a whole book on this, and if you did I would read it.

For Shovel Knight, we wanted a variable-height jump that wasn't too high (our screen real estate is limited). Shovel Knight also slides to a stop when running, like Mega Man, so we decided to make his landing stop-on-a-dime. This way, the player can jump and stop to assure the Shovel Knight will not slide off a ledge. We added some frames to Shovel Knight's mobility set, like a skid frame and edging out frame, for an extra dash of precision. We are very pleased with how Shovel Knight's jump and mobility have turned out thus far. 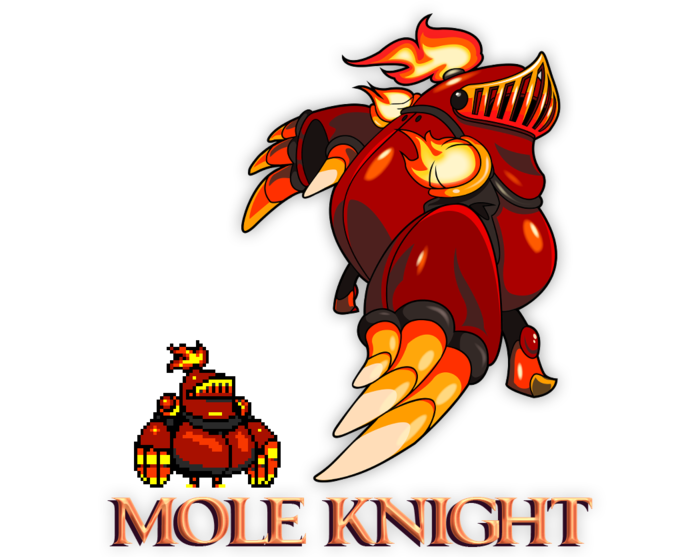 NWR: The studio has existed in one form or another since 2011. In those early days, what was your reasoning behind having this "side project"? What needs weren't being met?

SV: Sometimes, between projects or when your passion boils over, it's refreshing to work on something different than you do during the day. We didn't really know what we were going to make, but as we worked as a team in our own environment, it became clear that we had something special. We decided after Double Dragon Neon that we should go our own way, and so we set sail as Yacht Club Games! We want to work on original games in an immutable team. That's kind of it... there's really nothing juicy about it!

SV: With Yacht Club Games, we are aiming to be an independent developer. We believed in Shovel Knight and didn't want anyone else to own it or be able to control its destiny, so our intention was always to do a Kickstarter and self-fund what we could. We didn't pitch the game to publishers as a work-for-hire project, but a few publishers have approached us about helping bring the game to other territories or platforms, which is great! We hope that this type of relationship can continue, with the publisher acting as a partner who helps to market or distribute the game in places we normally couldn't. 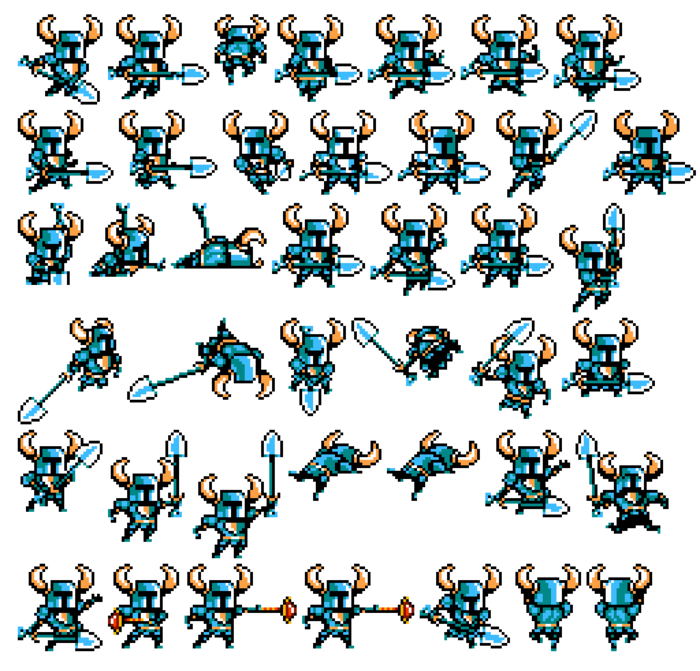 As for doing another Kickstarter? Maybe, although if we could afford to develop games on our own, we probably wouldn't need to go to Kickstarter for funding. Instead, we could focus that energy on making our games even better. So let's make sure that Shovel Knight sells a billion copies!

NWR: What has the Kickstarter process been like? Any difficulties in managing it and the game at the same time?

SV: During the Kickstarter, work on Shovel Knight has slowed down a bit because we are spending a lot of our time preparing updates, answering questions, and promoting the game. We recently did a big push for the Shovel Knight PAX demo. We launched the Kickstarter a week before PAX because we wanted to use any press from PAX to cross-promote the Kickstarter, and we worked very hard up until the last possible night. Once we got back from Boston (exhausted from demoing the game to tens of thousands of show goers), we did a little bit of work to get the demo ready for YouTubers and Twitch streamers, but development slowed at that point. It's been a couple weeks, so we're all really excited to get back into it. First though, I think we're going to take a day off! 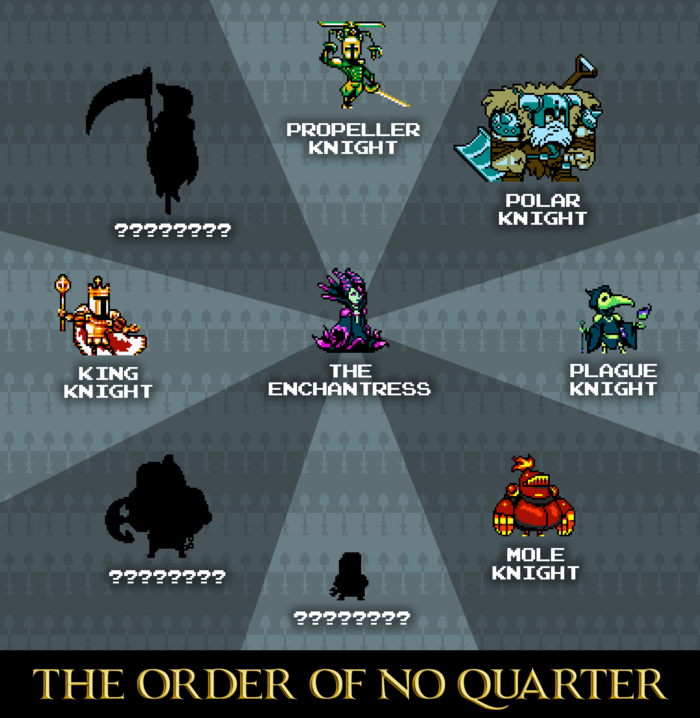 NWR: The studio's been great at providing content to backers and non-backers alike. Will this trend continue when the campaign is over, or will you "submerge," Kojima-style?

SV:We already love our fans, and we want to give them as much cool stuff as possible! We will continually interact with our community, do regular updates, and more. This will happen less often because we will be actively developing the game, but we want to make sure there is a steady trickle of information, with an occasional flood!

YOU STOLE MY JOKE

why don't you DIG up your own material here

Backed this a few days ago, I can't wait for this game!
Between this, Pier Solar HD, Two Brothers, and Cryamore the Wii U e-shop has me super hyped.

"Basically, it's playful arrogance, and it's pretty much the opposite of what we are. We're the world's most inclusive Yacht Club!"

That reminds me of how David Bowie named his first glitter band The Hype, a purposely commercial-sounding name.

Just bought this game via Paypal for the 3DS, can't wait!  ;D

YOU STOLE MY JOKE

why don't you DIG up your own material here

Ahahaha, yeah, I know the feeling. When it was announced for 3DS and Wii, I believe I used a news piece that said, "Can you dig it". The next day YCG said the same thing. Perhaps a joke theft, or perhaps no one can resist such obvious puns. Hmmm...

Thanks for the comments everyone, glad you enjoyed the interview, and I look forward to the game just as much as you!