Mario is back again in an adventure that feels both fresh and familiar. 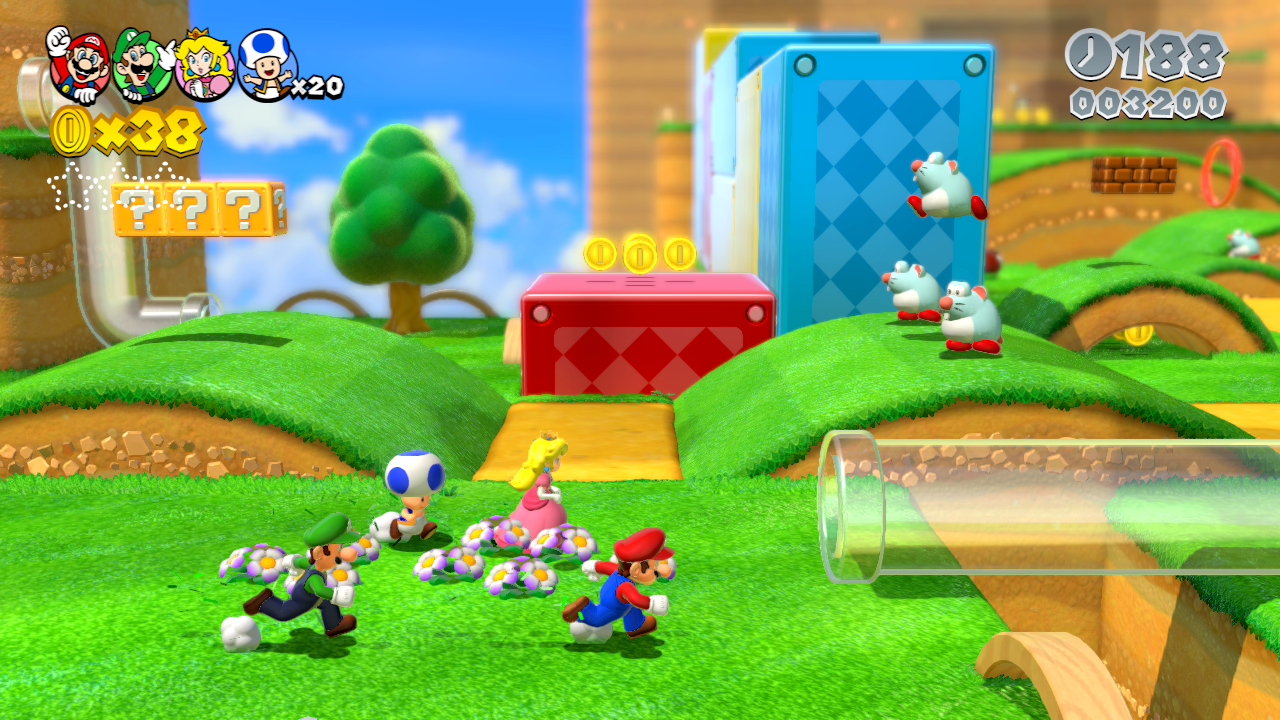 Super Mario 3D World is clearly a mixture of Super Mario 3D Land and Super Mario Bros. 2 (USA). This causes the game to feel fresh while at the same time giving Mario fans an experience that is also familiar, especially with the multiplayer mode.

I first played Super Mario 3D World with the Wii Remote on its side like an NES controller. The game's controls were basic. Movement is handled by using the D-Pad, run with the 1 button, jump with 2, and duck with the B Trigger. The only flaw here is that the B Trigger is a big awkward to press when holding the Wii Remote in this fashion.

Using the Wii U GamePad was much more straight forward. Controlling a character could be done with the D-Pad or the Control Stick. Jump was A, run B, and ducking with Z1. Hopefully the final version will allow players to use Wii U Pro controllers as they would be the ideal way to play this game.

Mario and crew retain several abilities from previous games. Ducking while jumping causes the characters to do a back flip. Wall jumping, the twisting back flip, long jump, and the ground pound also return. Running in tight circle for a while, and then jumping, will cause the character to spin jump. At one point I was also able to do a forward roll, but I have no idea how I did it.

Each character has their own unique strengths and weaknesses. Mario seemed to be the baseline character. Luigi jumped the highest, but his constant kicking did make landing in the right spots a bit harder. Toad seemed to be the fastest. Peach was very slow, but could use her dress to float like in Super Mario Bros. 2.

The characters' strengths and weaknesses didn’t seem to matter in the first stage I played. This is because at the beginning of the first stage all four of us playing the game needed to hop on an aquatic Yoshi like sea monster. This character apparently has no name yet (I asked). 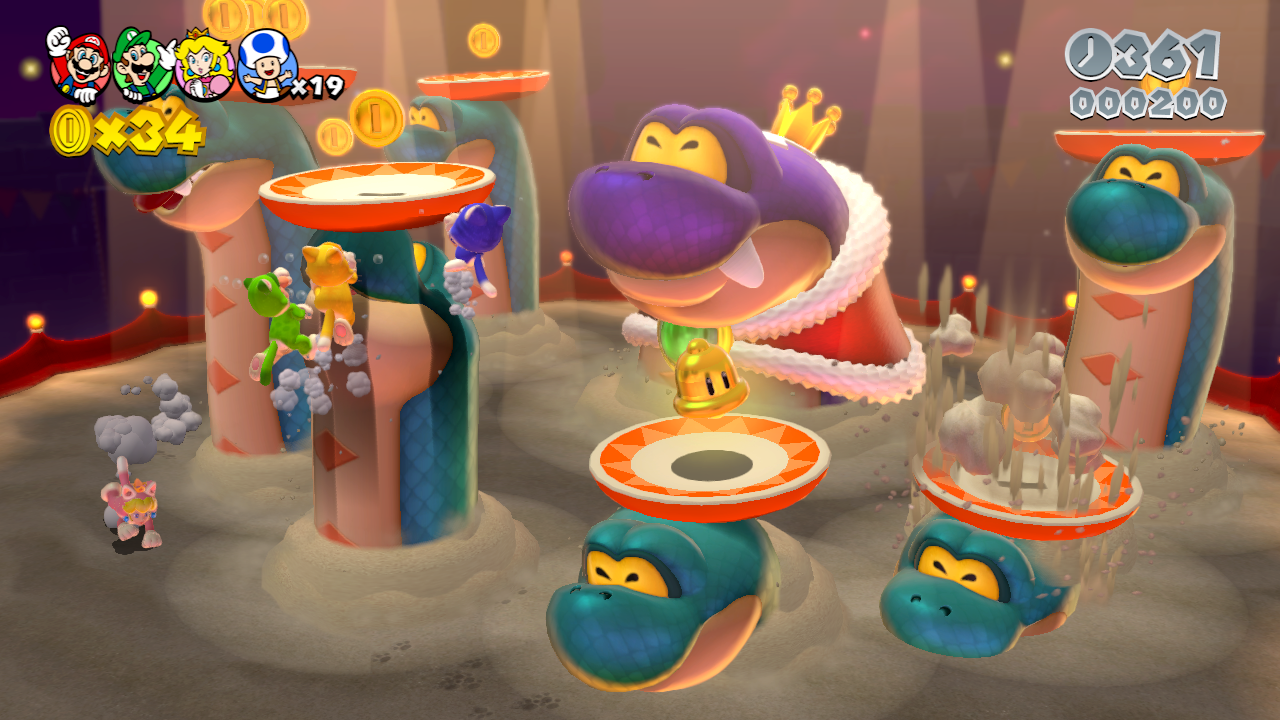 Once all players hopped on the back of the beast, teamwork became very important. The camera gave a behind-the-back view of the action as the sea monster swam down a straight course full of traps, hidden secrets, and more. Pressing left or right would cause the creature to swim in that direction, while also still barreling forward. The speed at which the monster would turn appeared to depend on how many of the players were currently controlling him in a given direction.

It’s also possible to make the sea monster jump by pressing the jump button and any player can control this. This made the stage a bit chaotic at first and really caused everyone to cooperate in order to each the end goal.

The first stage also had boost pads, which would give the sea monster a quick boost of speed. Boosting appeared to be the only way to reach certain secrets, some of which even appeared behind waterfalls. Rings also littered the level and would give everyone playing more points if they made their way through. My team of players also managed to find a green star.

At the end of the river was a warp pipe that led to the end of the stage. This is something familiar to anyone who has played Super Mario 3D Land. After hopping on the flag pole, the game gave a total score and the demo was reset.

There were also three more standard stages to play in, as well as a boss fight. The standard stages were all very reminiscent of Mario 3D Land, but they also appeared to have much more going on. Each stage had secrets, which is to be expected in any Mario title.

The first of the basic stages appeared to be set in grasslands full of moving platforms and obstacles. The second of these stages was set in a more dirt-like and underground setting. The second stage gave out the new Cat Suit more than any other.

Using the cat suit is a ton of fun. Just jumping on special surfaces will have the player grip it. Moving around felt similar to around on fences in Mario World. Hitting the run button while a cat allowed Mario to scratch at foes. Hitting the same button while jumping sent the character in a diagonal attack dive towards the ground. The most fun part though was easily just climbing up to the top of the flag poles. This will never get old.

The final standard level was full of the new Clear Warp Pipes. Going in one of these new pipes would send the player though automatically. There is, however, some control. The pipes often branch out and holding the appropriate direction would send the player down a new portion of the pipe. This gameplay mechanic was used in several exciting ways. 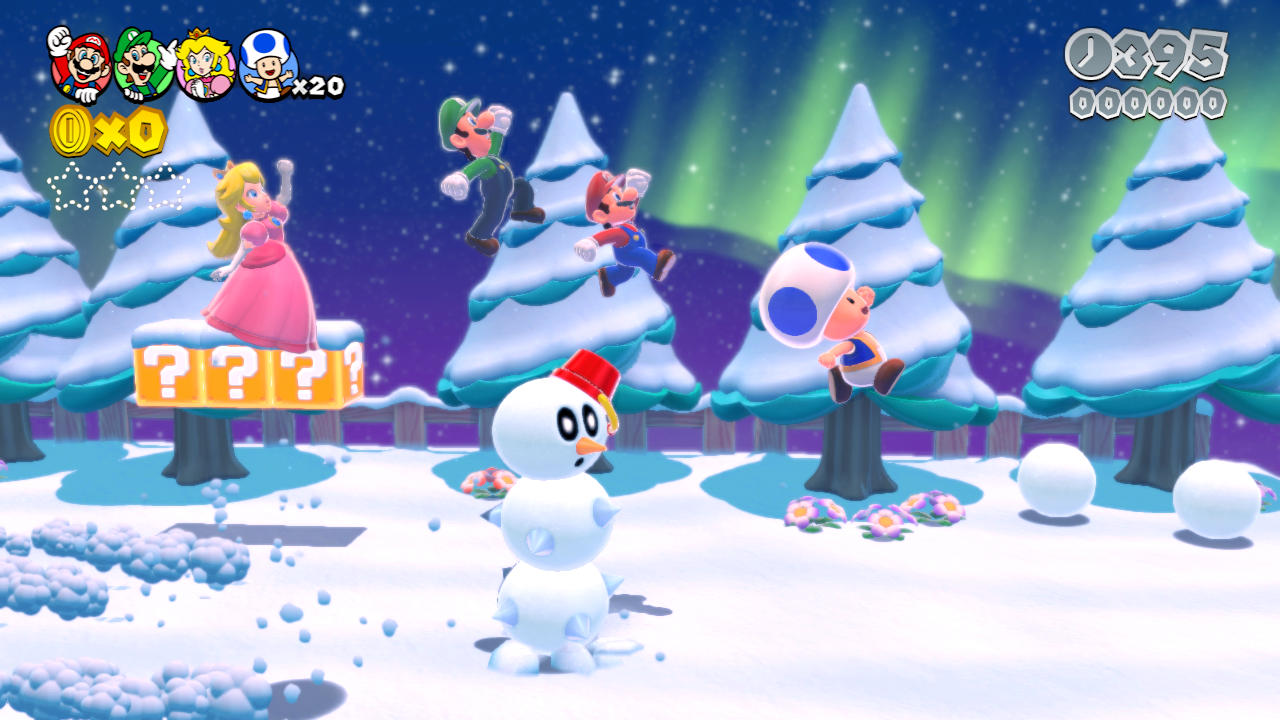 At one point, every player had to pop out of specific portions of pipe in order to grab different keys before the path, leading towards the end of the stage, would open. The end of the level also featured a mini pipe maze. Going through it correctly would drop the player off at the top of the flag pole at the end of the stage. Go the wrong way here and the player would be dropped beneath the top, or next to the pole completely.

The fire flower was also introduced in this stage and works as expected. It is especially useful with clear pipes around since a fire ball will travel through a pipe and kill any enemies weak to it which lurk inside. Pipes full of enemies often led to various rewards such as coins or hidden warp pipes.

The final stage was a boss fight against a snake like enemy wearing a crown. Only the snake’s head was poking out of the ground and he had a weak point on his head. The problem was his head was too high to jump on normally. In order to reach the top players needed to jump on the heads of smaller snakes that would occasionally pop out of the ground and slowly work their way up to the height of the main boss’s weak point. This ended up being somewhat challenging especially while dodging attacks and trying to accomplish the same exact task as several other players.

Overall, the Super Mario 3D World demo has me wanting more. The multiplayer aspects will be a ton of fun and each stage will have replay value since there are hidden routes and green stars.

Wow, I'd love to see that video. This sounds like a great game! I loved 3D Land

I'm sure people are well-aware of my stance on the "3D X" style of platforming.

But I honestly can't see how anyone would be excited for this title.

I am so pleased with what Nintendo showed this morning. This game is near the top of my list of most wanted titles. It's comfort gaming that I can play with my family and friends.

All platforms, and you forgot Pikmin 3, the GOTY runner-up.

I already made my statement about this in the 3D world discussion in the Console forum. While it helps that Mario Kart 8 isn't coming out this year to give 3D World the easier path to best Wii U game of the year potentially, I still think something from the 3DS will take it. That's the system with power right now.

Any game that lets you reference the old Mario cartoons is a good one in my book. Interesting that they have blue-spot toad (like in SMB2, of course).

Not happy about this at all. The Mario 3d games were for the 3DS because that was the system that used 3d. 3d world should have been a 3DS sequel on The 3DS. It should have had elements from SNES mario world. This is just NEW SUPER BROS. with different camera angles. Nintendo is just rehashing to move systems for the holiday and grab the casual gamer group.

This is just NEW SUPER BROS. with different camera angles.

According to Ars Technica via a Nintendo rep, no Nunchuk support was planned. What the whuck? The Pro Controller better be supported. A 3D platformer without an analog stick is the worst.