Luigi's hopes and dreams are made manifest.

Dream Team once again brings Mario and Luigi to the land of dreams, but this time, it’s not Wart, but a new nightmare called Antasma. And you’re not saving the people of Subcon, but instead you’re on a mission to save Pi’illos, pillow creatures that have the ability to move between the dream world and real world. At the beginning of the story, Mario’s crew visits Pi’illo Island. Luigi lies down to dream, which opens up a portal that Peach is sucked into. 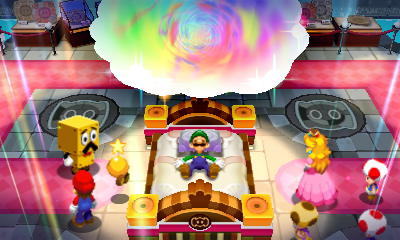 The demo began a little bit after this intro where Mario and Luigi are on a search for the princess. They'll be aided by Starlow the Star Sprite from Bowser’s Inside Story, who makes a return appearance. They quickly encounter Dreambert, leader of the Pi’illos, who tasks them with rescuing Pi’illos who have been turned to stone. We soon learn some backstory behind the land of dreams. Originally, there were two powers: a dreamstone and a darkstone. The Pi’illo forces battled Antasma, who shattered the darkstone, creating chunks that petrified the Pi’illos. At the end of the demo, Mario and Luigi are tasked with finding Eldream in Dream’s Deep, who may be able to help find Peach.

While the real world was in overhead 3D, the dream levels were side-scrolling 2D. The environments are in 3D, but the characters remain sprite-based with a soft aesthetic. Upon encountering a pillow in the real world, Luigi can take a nap, which opens up a portal into the dream world. In each dream, you must collect all of the nightmare chunks to rescue the Pi’illo and exit the dream. 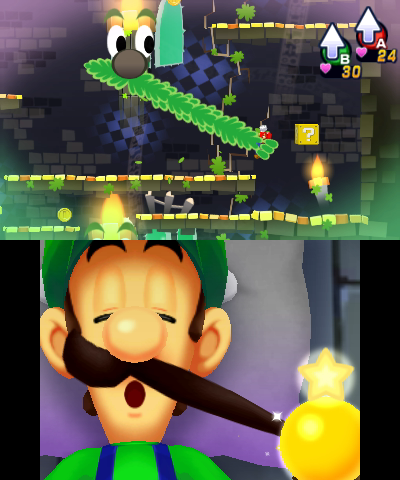 Dream Team shares some similarities with its direct predecessor, Bowser’s Inside Story. Rather than splitting the screens between Bowser and Bowser’s internals, the screen is often split between Luigi and Luigi’s dreams. For whatever reason, only Luigi has the ability to open portals to the dream world, but Mario can enter his dreams. What’s more, various elements of the dream can be linked to Luigi’s physical body through “Luigination.” As he’s sleeping, Starlow can mess with Luigi’s face to produce effects in the dream. For example, in one level, Luigi’s mustache was linked to tree-branch-like structures in the dream. Tugging on Luigi’s mustache on the touch screen made the branches grab and slingshot Mario around the top screen. In another pair of levels, Luigi could link with a tornado. Tickling his nose caused the tornado-Luigi to sneeze on the top screen, pushing blocks from the background into the foreground, making them accessible. Overall, it was a pretty unique mechanic that should make for interesting level design.

Though the game’s battles are still turn-based, they have a heavy action component. The effectiveness of attacks and defense rely heavily on timing of interactions, not just button timing but even moving around with the Circle Pad. The bros’ trademark hammer and stomp attacks were the primary attacks, while the single available combo attack had the brothers continually bouncing a shell back and forth. 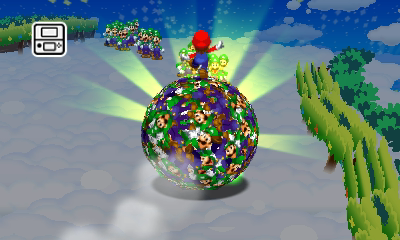 In Luiginary mode in battles within the dream world, you no longer control Luigi separately from Mario. Instead, he becomes a force for boosting Mario’s attacks and is far more powerful. An army of Luigi duplicates spawn from Mario’s attacks. The Bros attack menu is replaced by a Luiginary attack menu, of which one was available in the demo. In this one, a ball of Luigis rolls into the screen in 3D, and you must use the 3DS gyroscope to maneuver the ball around and bowl over more Luigis to power the attack up. Though the number of Luigis has multiplied, so have the number of enemies, who may attack individually or in groups. However, at least in the demo, the enemies were all easily dispatched. 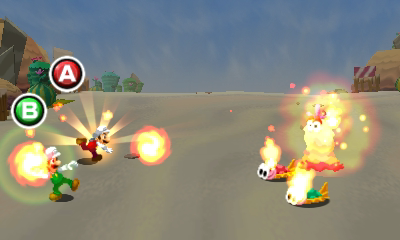 Mario & Luigi: Dream Team asymmetrically splits the brothers, giving Luigi the starring ability. This ability to link the dream world and real world holds a lot of promise and the interactions thus far were interesting. The colorful world is humorous, though a bit different from that of Paper Mario, reflective of the different direction that the Mario & Luigi series has taken and the importance of Luigi in the game. Though an RPG, the game is very action heavy, perhaps the most yet, and it will be interesting to see how this balances throughout the game.

Man I hope it's as funny as the first. That first Mario and Luigi was side splitting funny!

One thing that bugged me about the last 3 games is it always felt the back grounds weren't filled in. Sometimes there was just blank space beyond the borders of the actual game. This looks to fix that.

I wouldn't be surprised if he makes an appearance somewhere in the dream world.

If there is no Fawful, I will have FURY.