Those craving a new WarioWare game showcasing the unique controls of the Wii U at the system's launch might be disappointed to see that Game & Wario is not a collection of several crazy "microgames" at all, but instead a traditional, from what can be seen in the demo anyway, collection of mini-games.

I won't go into details describing each mini-game since this was already covered in our preview, but rather write down my general feelings about each of them. 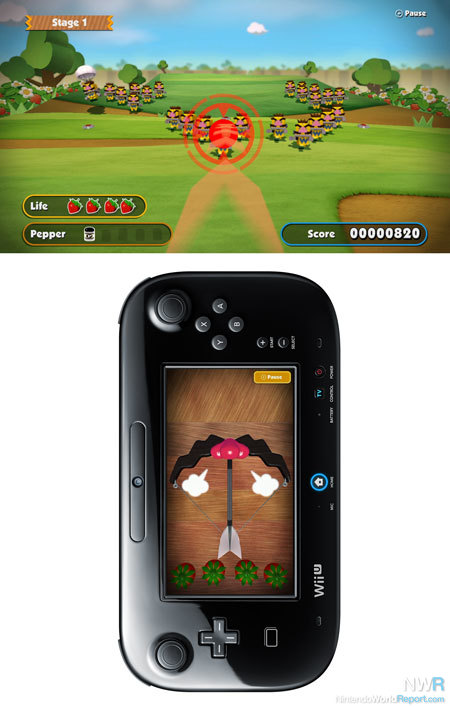 The first mini-game the rep had everyone play, Arrow, had you hold the GamePad vertically and draw a bow with your finger on the screen. The farther you draw the bow, the stronger the shot, which means not only increased distance but also shots that can knock enemies back into each other, setting combos. You can also collect pepper shakers by shooting at them when they appear on screen, and use them by tickling the nose on the tip of your arrow before firing it—a nice touch. After shooting wave after wave of identical mini robot Warios (in three variants: normal, shielded, and flying) for approximately three minutes, the level culminates with a giant robotic boss coming slowly at you. Shoot all of the bolts on his arms and in his big nose, then shatter his teeth, and finally hit his weak point for massive damage. After the explosion, all that is left is a feeble, white creature you finish off with one arrow, and you've won the game.

The second mini-game, Ski, is by far much shallower. Again, hold the GamePad vertically, but tilt it left and right to slalom through the course. Shake it to jump and do figures. And that's the game. Not only does it feel more like a free iOS distraction than an actual game, it also has the basic problem of putting the worthwhile graphics on the TV screen, which you won't be looking at, while giving you a straight overhead view of a an almost stick figure skier on the tablet. There is absolutely no representation of depth on that display, so you can only tell you've hit a ramp because it's brown instead of white. It is boring to look at, it is over quick, and it is not something I wanted to go back to.

The third game, Shutter, has you playing an investigative journalist trying to spot in a scene some perps, whose portraits are shown at the bottom of the screen. It is one of those games in which you hold the GamePad in front of the television to get more details. You are basically holding journalist's camera and combing the scene by zooming in and out to find the suspects and get a good shot. For a perfect score, the face has to be properly framed, facing your camera, and must not be blinking. Find all five people, and you get the opportunity to keep playing to get better shots and improve your score. There is also a hidden creature to be found for extra points. This mini-game does a good job of showing of the "second window into the game's world" capability of the GamePad, though it is much slower paced, and less fun, than the Shield Pose demo from last year.

The final game is multiplayer only, with one person using the tablet and everyone else only looking at the television screen. In Fruit, you make sure others can't see the GamePad while you select which character you'll be playing as. The game then takes place in a town filled with people going about their business. Apples appear at random places, and you have to get to them and eat them, but not get found out. So you must try to hide behind the cars and buses passing by, or within throngs of people. Get all four apples, and the others then take turns holding the tablet and guessing which character you controlled. Think of it as a basic Assassin's Creed, combined with a Spot the Sneak mini-game from Wii Party.

Other than Ski, these mini-games were fun and perfectly serviceable, but perhaps a tad shallower than the Nintendo Land games. They were mostly slow-paced, a bit basic in their looks, and didn't really have the charm or the wackiness of WarioWare microgames. It seems to be so far just another mini-game collection like we've seen before from Nintendo. A step above Wii Play in presentation, depth, and gameplay, but a step below Nintendo Land in all those aspects as well. It's unclear why these games have to be on their own disc instead of combined with the rest of the Nintendo Land offerings, except for perhaps coming from a different team at Nintendo and not really fitting the Nintendo Land theme. Nothing is known about the final number of games Game & Wario will contain, but if the current demo is any indication, it will be hard to recommend this title over Nintendo Land, or to people who already have several Wii mini-game compilations to entertain people with.

What a strange collection of mini-games, and a bit unfortunate that the experience seems rather... uninspiring. So it's not exactly WarioWare, and it's also not Nintendo Land quality. I wonder what exactly they're aiming for here.

My hope is that this is a clandestine eShop game from Nintendo: like the next generation of Game & Watch Collection games for the console. I do hope there's a proper WarioWare game. Perhaps the GamePad necessitates a slightly less manic pace, given the input mechanic. Although I could imagine a lot of great gags with having to spin around and find some odd thing in the "virtual" environment around you using the 2nd screen.

Also: I still don't really understand the Fruit game. What do people do with the tablet while guessing which character you controlled? I'm sure it's intuitive while playing, hard to simply explain.  A worrisome problem with many Wii U concepts...

The only thing I hope to see transpire in the near future of Wario is a Wario Ware 3DS game. That would ensue SO many types of mini games. I can just imagine what the retro 9-volt mini games would be like.

Also: I still don't really understand the Fruit game. What do people do with the tablet while guessing which character you controlled? I'm sure it's intuitive while playing, hard to simply explain.  A worrisome problem with many Wii U concepts...

While you're eating the fruit, they don't do anything. They watch the TV and try to figure out who you were. When you're done, you pass them the GamePad and they choose you out of a lineup.