The Lexicon of Zelda

A complete guide to translating the text in Breath of the Wild.

Something that has added an extra layer of intricacy to the lands and lores of the Zelda series is the Hylian language, which has adapted and evolved across the history of the franchise.

Since Ocarina of Time, the Hylian that appears in-game has regularly been translatable to varying degrees of success in each new game, and Breath of the Wild is no exception.

There are in fact three main alphabets present in the latest game. The most prominent is Hylian itself which can be found absolutely everywhere, the Ancient Shiekah language found in the shrines and featured on the Shiekah Slate, and the Gerudo language. All three can be translated directly into plain English for the most part, and with a little practice you may even be able to start recognising and reading the signs in the game without referring to the cyphers. Let's get learning! It should also be noted that there are potentially location and character spoilers below, but I'll do my best to keep plot details out of the article. 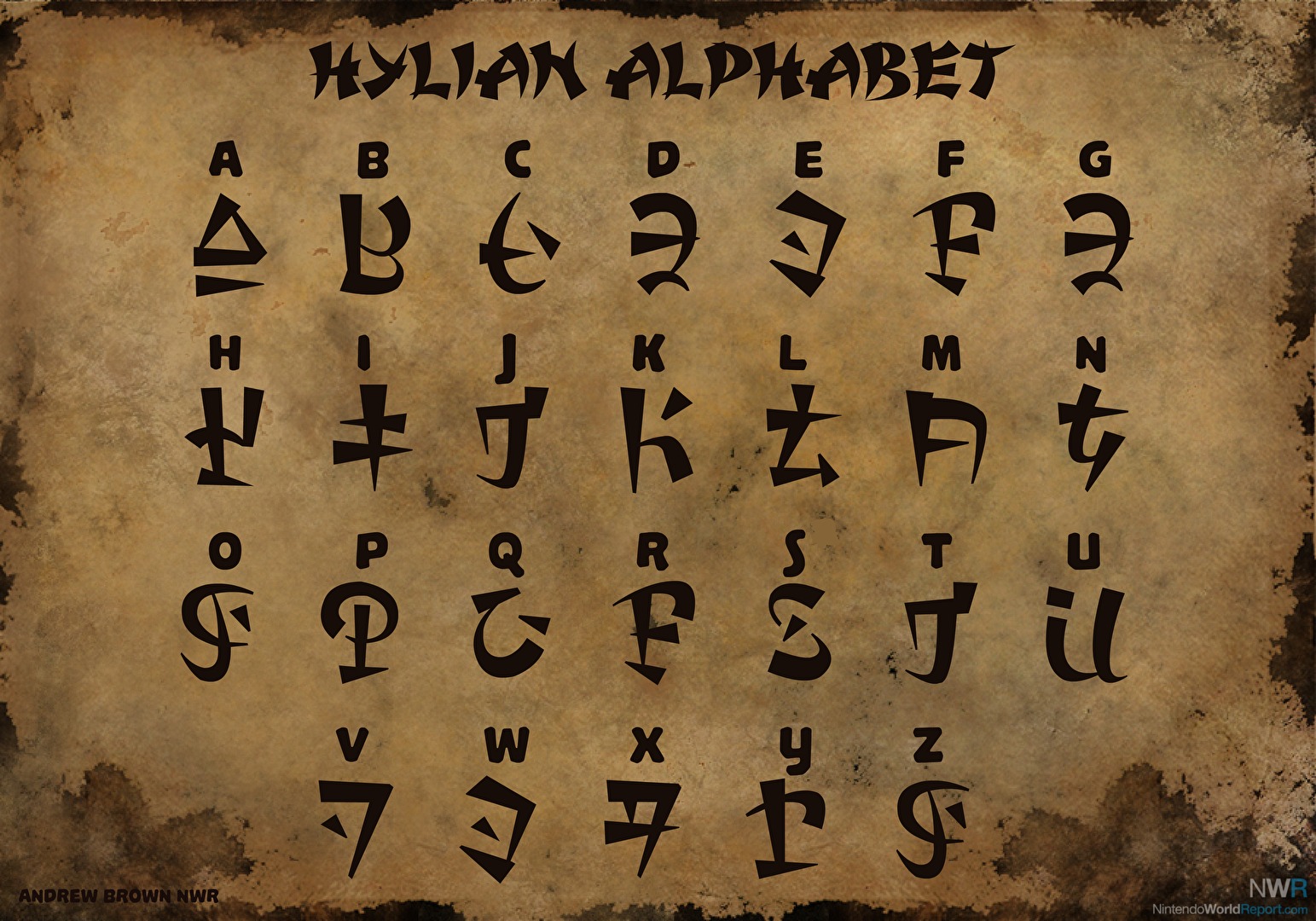 There are two notable points to make in order to successfully read Hylian in Breath of the Wild. I'll get to the second point in a little bit. The first is that this text is *similar* to the one found in Skyward Sword, but appears to be an adaption in that some letters are rearranged and some are different entirely.

The easiest place to start studying this version of the language is in Goron City, where you can pick up a sizable portion of the alphabet as well as the basic conventions of the language. I personally started in the armor shop Ripped and Shredded, where the Flamebreaker armor on display clearly labels the three set pieces as "Leg", "Torso" and "Head", not to mention the big sign saying "Armor" out in front of the store. This already gives us A, D, E, G, H, L, M, O, R, S and T.

Looking around town you can start to piece together the other signs such as "Wares", "Info" and "BBQ", which brings me to the second point mentioned earlier: this version of Hylian has several repeated symbols. Specifically, D and G, E and W, F and R, J and T and O and Z all share the same letters. Amusingly the inn is named "ZZZ" where others in the game are called "Hotel".

I'll leave it up to you to translate the other signs around the game, as some of them can be quite funny or surprising. Without going into too much detail we can get a few noteworthy nuggets of information. The Kakariko stores have their welcome mats upside down - we can see the underside of them as the text reads backwards. The Rito can't spell as evidenced by their "shoppign" sign. And why is the Hateno Village shopkeeper filling out notices labeled "caution" on his desk? As it turns out, this Hylian was also used in A Link Between Worlds (which is where I was able to get J and X, which I haven't yet found in Breath of the Wild), so if you've been meaning to replay that game you should be set to translate the text there too. 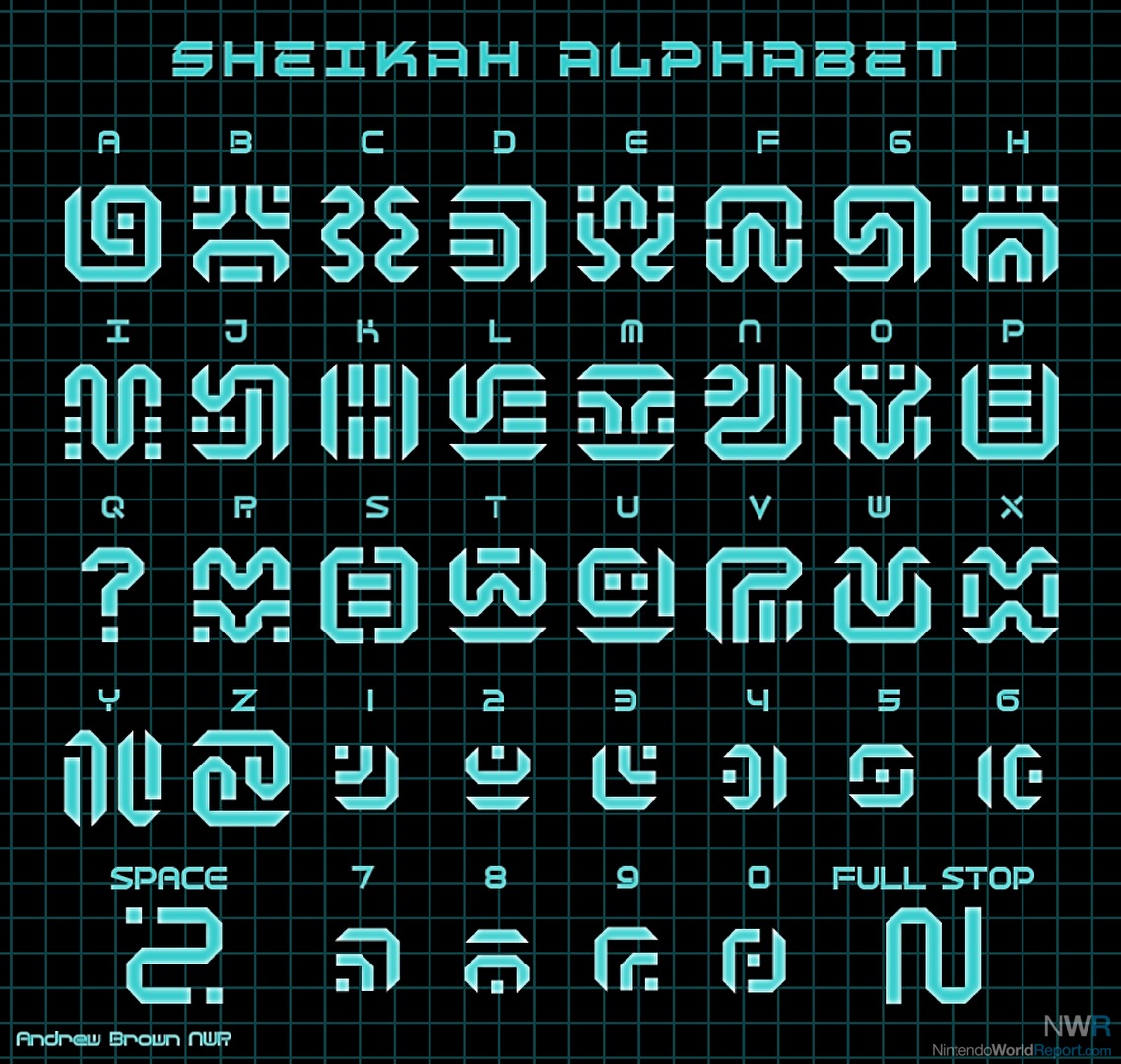 This was already translated by a few people since the original teaser spelled out "The Legend of Zelda" in the ancient text, but you can use the following cypher to translate various words on the doors, traps and gizmos found in the Shrines and Sheikah Towers. My favorites are "now loading" when downloading new map data to your Sheikah Slate and the words "Sheikah Slate" themselves in repeating text making up the borders across the top and bottom of the menu screens.

This particular cypher is pieced together from the work of others who have already studied the language in depth, and can be confirmed by comparing with the text in the game. DeanOfDoom from Church of Hyrule makes a convincing argument that the language doesn't include the letter Q at all, as it is not found anywhere in the game. A full stop and a space symbol have also been found. 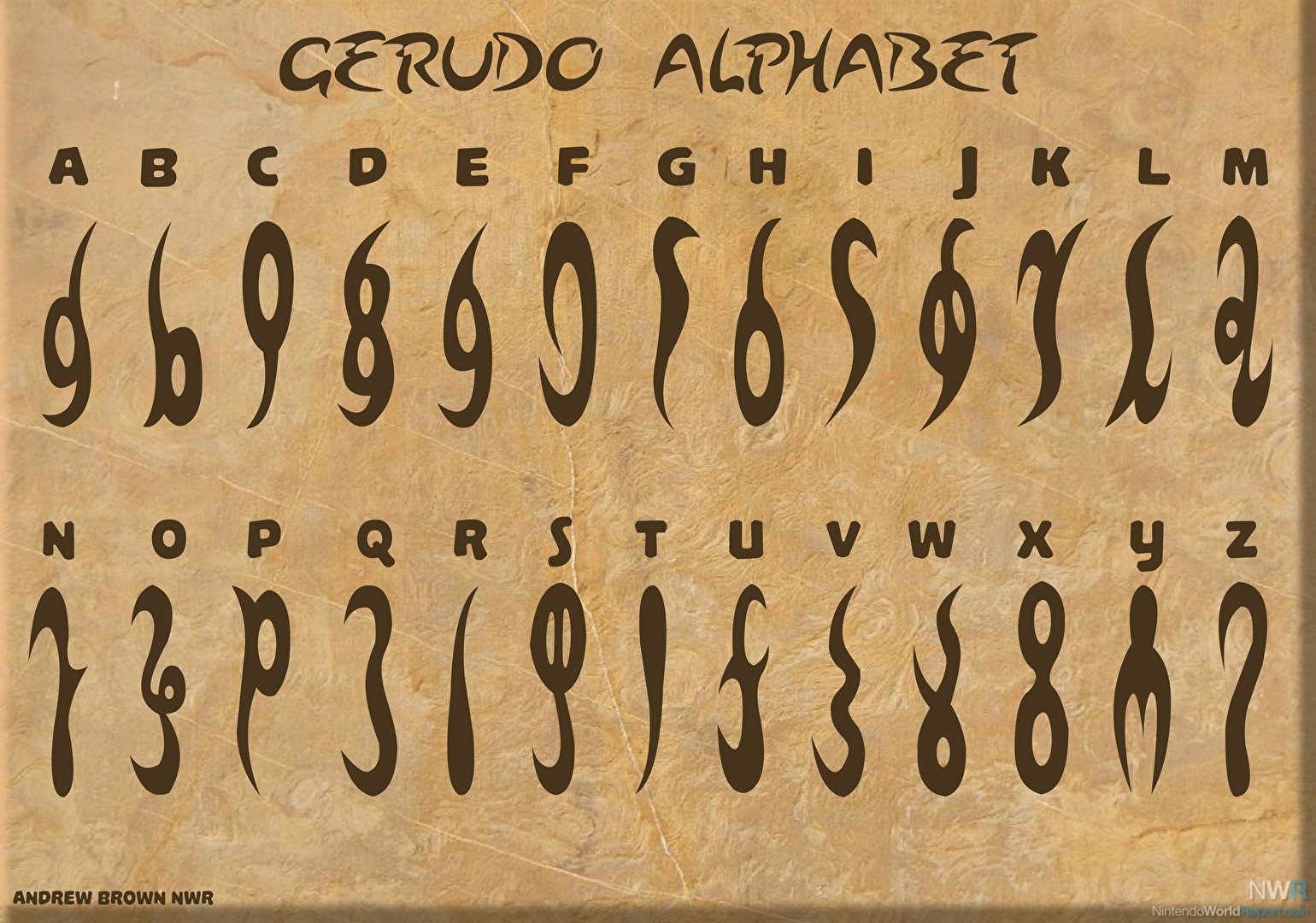 This language has remained unchanged since it was used in previous Zelda titles and has been fully indexed in Hyrule Historia. The difference here is that where this language used to list the letters alphabetically or spell gibberish in past games, in Breath of the Wild there are entire passages of translatable text in the Gerudo Palace that seem to narrate their culture's reverence towards their people. The fact that this text remains unchanged across many games may be a super-subtle suggestion about how ancient their culture and traditions are!

So there you have it, these guides should hopefully let you enjoy the breathtaking and vast land of Hyrule in a slightly new way. The only sign that I was completely unable to translate was a banner on each side of Kakariko Inn, which seems to say “Rd Ipod On”. I'm guessing that's something that's completely lost in translation and was perhaps even a loose romanisation from Japanese or even another language altogether. Any suggestions from our linguistic readers out there?

Paper texture credit to SampsonX on DeviantArt. Sheikah text research credit to various sources including DeanOfDoom from Church of Hyrule and RagnarokX from NEOGaf.

Are you sure the Hylian one is entirely correct? It shows the exact same characters for O/Z, D/G, F/R, and J/T. I know O,R, and T are right, put have yet to run into Z, F, or J, so I can't help but suspect they're not used and those were just place holding guesses.

Oops, my bad... the article acknowledged that. Serves me right for commenting before reading the whole thing.