There's no event quite like the launch of a new Nintendo system to bring out the excitement and anticipation of fans all around the world. On the midnight of March 3rd, 2017, many gamers eager to get their hands on those iconic blue and red (or gray if you're conservative and boring like I am) Joycon controllers lined up at their respective stores and outlets to be among the first to own the Nintendo Switch.

It so happens that Australia is a good ten hours ahead of most US time zones, and as such our midnight launch came much earlier than in many other Western countries. As if that wasn't enough to brag about, Australia knows how to throw a launch party. This wasn't a simple matter of queue outside a store, pick up your console and head home, oh no. We do things properly down under! 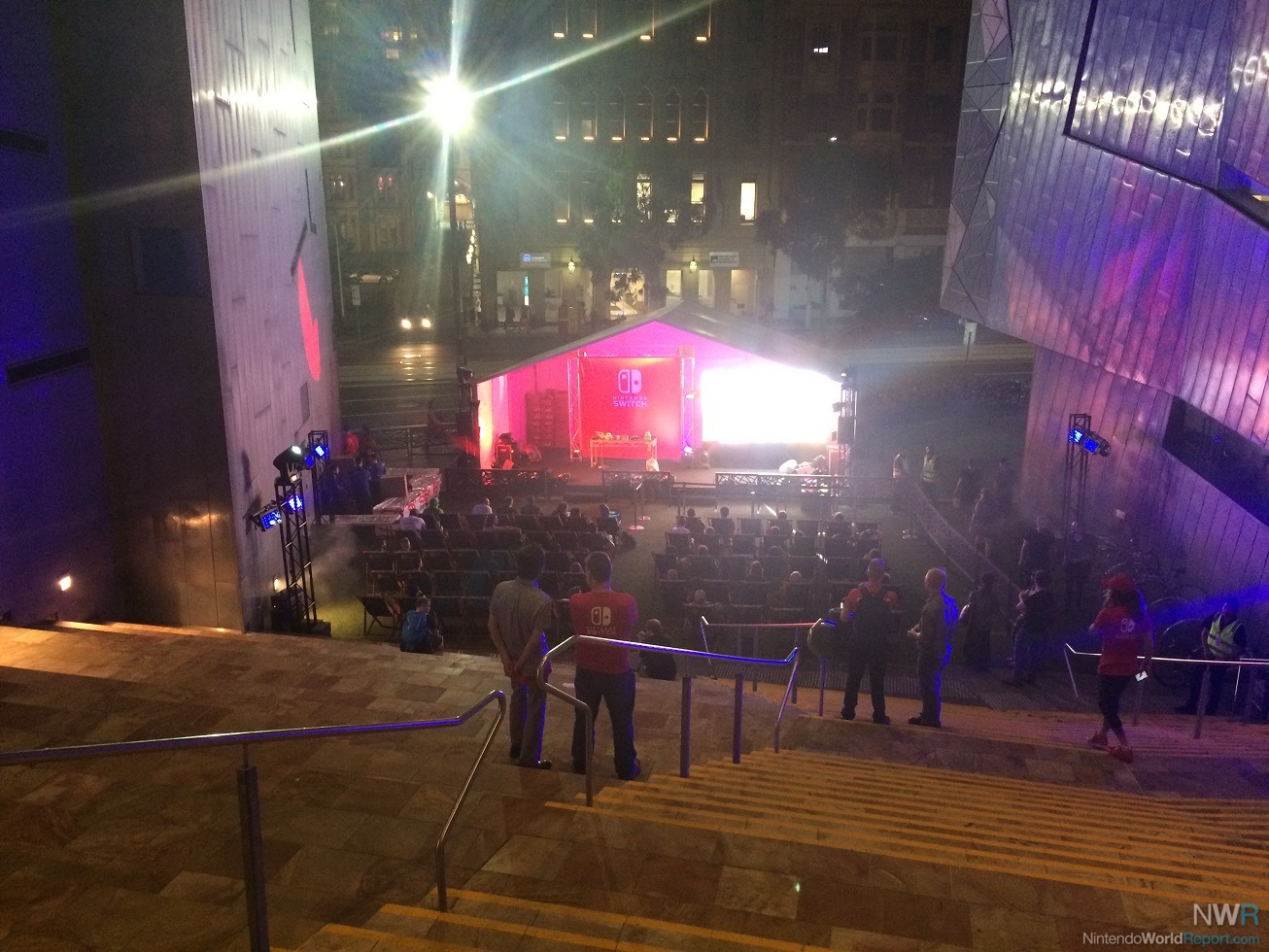 The blinding light of the future shines bright!

If you've read any of my earlier recounts of Nintendo game and system launches – have I really been at NWR that long!? - you'll have read about balloon animals, Mario and Zelda themed cupcakes and show bags full of goodies. It's safe to say the Switch launch was bigger and better than those events. It was bigger than any other launch I've ever attended! The event was managed by local retailer EB Games in partnership with representatives from Nintendo Australia on site to keep things in check.

In my home city of Melbourne, VIC, the midnight launch for the Switch was held at Federation Square, a public plaza surrounding the SBS TV station headquarters and the ACMI film and media exhibition building. The Fed Square Amphitheatre was decked out with a stage and screen display showcasing all the upcoming Switch games and commercials we've seen up until now, with smoke and laser machines lining the walls to add an atmosphere of celebration and mystery for the upcoming system release.

Deck chairs had been arranged in the lower stands closest to the stage, and people had already started to amass by the time I arrived in the early evening. At 9pm the festivities started, and they kicked things off quickly with a few rounds of 1-2-Switch, playing Quick Draw, Milk and Eating Contest. Winners were given EB Games vouchers, plush Piranha Plant hand puppets and goodie bags.

As the night rolled on, customers were given the opportunity to pick up their games and accessories ahead of the launch, to help clear order congestion upon the stroke of midnight, and with each passing hour there seemed to be more and more fans gathering for the big event. There was a Nintendo cosplay competition with quite a few Zelda series costumes on show, some Splatoon, some Mario and even two brothers who dressed as the Joycon controllers. Everyone won a prize bag, but the ultimate winner was a female Tingle, I'm pretty sure the same one who graced the Link Between Worlds launch party a few years back.

Next up on the game demos, audience members got to sample Mario Kart 8 Deluxe, which really does look like a definitive master edition of the Wii U title. It may be the same game with all the omitted characters and features from the original version rightfully restored to the Mario Kart franchise, but it sure does look good on the Switch and I can't wait to take this game out on the go.

Between the demo sessions and rolling out the last of the pre-ordered Switch accessories and games, local remix artist Tuna took the stage to pump out techno music with plenty of video game themes worked into the beats, which kept the crowds lively and alert as the hours progressed. Every so often they'd announce how much time was left before midnight hit, and during the last hour the adrenaline rose to a fever pitch. In the last two minutes before midnight, a countdown began with an increasingly frenzied rendition of the classic Mario theme music, drumming up cheers from the crowd as the moment approached...!

Finally, midnight hit and the Nintendo Switch was released to the Australian public. As the crowds collected their consoles and dissipated into the streets of Melbourne, everyone's faces were an amusing juxtaposition of both exhausted sleep deprivation and giddy eagerness to get home and set up their new consoles.

If the crowds were anything to go by, the Switch so far has much more of a fan following than the Wii U launch could have hoped to achieve, and I sincerely hope this is a system that keeps the momentum into Splatoon 2, Super Mario Odyssey and beyond. I can't wait to see what's coming in the next Nintendo Direct! 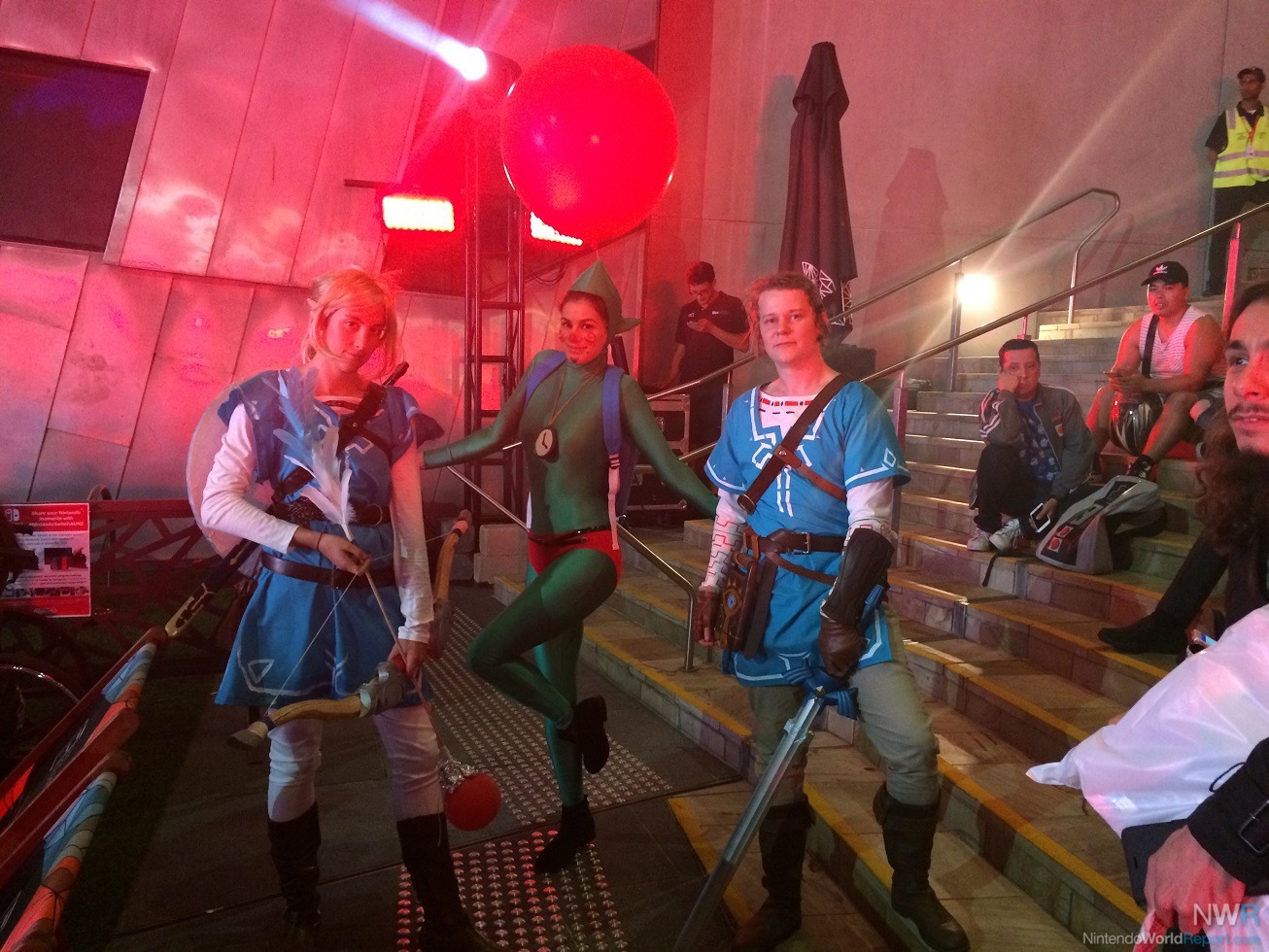 Check the gallery below for my event photos and sound off in the Talkback comments, I'd love to hear what kind of launch adventures our readers had. Were you at the Australian launch? What was your favourite part?

Now if you'll excuse me, taking time away from Hyrule is giving me major withdrawal. Time to get back to saving that princess!

Looks like it was fun. I would like to go to a midnight launch one day, but they arent allowed in WA.
I just went to EB as soon as they opened at 8am. I live in a small city, so there were only about 8 other people waiting there.

Looks like it was fun. I would like to go to a midnight launch one day, but they arent allowed in WA.
I just went to EB as soon as they opened at 8am. I live in a small city, so there were only about 8 other people waiting there.

What is the reasoning for this? How interesting!

I dont know all the details, but basically there are strict trading laws about when shops are allowed to be open.

Strange. Is it just some types of shops, or all kinds? It'd stink to be yearning for some Tostitos and Walmart's closed!

All kinds I think, but I dont know the exact rules. One night per week (thursdays), is late night shopping, where they can be open until 9PM

If I lived in Washington, I'd be doing midnight runs to Oregon with you for Tostitos or your preferred snack!

Cool writeup! Always fun to catch a glimpse into the scene down under. :)

Just to chime in on the opening hours discussion though: could see why (smaller) towns choose to enforce stricter hours. Be it from some certain religious reason, or perhaps more practically - longer hours means you're asking more from your employees. While the convenience of 24/7 shopping is immense, you gotta wonder if your staff can handle all the extra hours.

In small towns it might just not be feasible to stay open longer every day, knowing that it won't increase your customerbase by much - they'll just come in later instead so you're essentially spreading the same amount of purchases over more hours (and thus more costs to the establishment). Just not a great financial proposition I guess?

Where can I hand over this post for my complimentary BA in Economics?