Torchic, Treecko, and Mudkip: I Choose You!

Pokémon is full of important choices; none more vital than the choice of a starting Pokémon. This decision is more than the choice between grass, water and fire, but the choice of a closest companion for a 40+ hour adventure. A group of our staff has been giving this decision some deep thought after having the chance to play each of Pokémon Omega Ruby and Alpha Sapphire starterting Pokémon’s mega evolution in the demo.

Since picking Bulbasaur in Pokémon Blue, I have always found myself drawn to grass type Pokémon. After playing the recently released demo for Pokémon Alpha Sapphire and Omega Ruby, I plan to continue that trend.

I quickly learned the benefits of grass type Pokémon after I was able to breeze past the first three Kanto gyms. Besides overpowering water Pokémon, grass type has advantages over rock and defensive advantages over electric Pokémon.

Another trait that sets Treecko apart from its starting peers is its speed. Being able to attack before an opponent's Pokémon could decide a close battle. Treecko has 40 more starting stat points for speed than Torchic and has double the starting speed of Mudkip.

Treecko also gains the most from its Mega Evolution. When evolved to Mega Sceptile, the Pokémon becomes a dragon type which is arguably the strongest Pokémon type in the game. Mega Sceptile also has improved defense versus electric type Pokémon through its Lightning Rod Ability. Lightning Rod enables Mega Sceptile to absorb damage from electric attacks to raise its special attack stat. 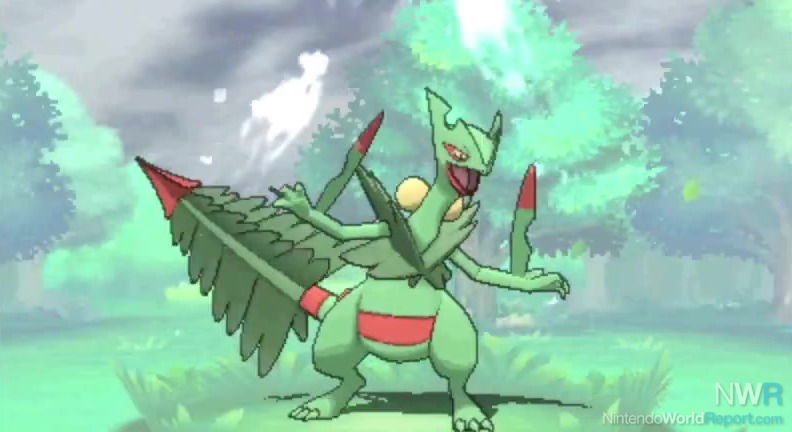 Finally, lets face it. When all the fighting is done what really matters is how cute your Pokémon is. While Treecko isn’t the best looking of the three in its starting form, Sceptile is the only second evolution of the starting Pokémon that isn't hideous. So if you are like me and anamorphic, roided-up fighting chickens are cause for nightmares and are not into fish-toads, Treecko is the obvious choice.

Since the early days of the Red/Blue generation, I have always chosen the water starter. Maybe it’s because I enjoy water, or just like the color blue, I’m not sure. But it’s a habit I’ve noticed from day one and it’s always worked out for me well in the end. People have their reasons for choosing Torchic or Treecko, but Mudkip has always been the Pokémon for me.

Torchic and Treecko eventually evolve into Blaziken and Sceptile, and with those evolutions they get some great speed stats. Swampert, unfortunately, doesn’t get the same treatment. But what Swampert does get is some pretty good HP stats, and his attack stats are pretty great as well. This makes him a great offensive tank that can KO the toughest opponent. Mudkip and his evolutions might not have the best speed stat of all time, but if you can make up for it on offense and HP, do you really need speed?

Treecko is reliable on the first gym, since grass Pokémon can take out Roxanne pretty easily. And maybe it can get past Brawly under the right circumstances. But what’s going to happen when Wattson unleashes his Magneton? Mudkip, who later evolves to Marshtomp, seems to be the better answer. Admittedly, Torchic/Combusken might be the better overall choice, but that’s after having to deal with the tough Roxanne battle. But with it’s Water/Ground typing, Marshtomp can hold his own against Wattson and send him packing. Out of all three starter’s chances against the gym leaders, Mudkip and his evolutions seem to be the best overall choice.

At the end of the day, it’s purely subjective as to what Pokémon you should pick to start off your game. But I will say, Mudkip is the coolest looking Pokémon out of all the starters. I mean, Treecko looks weird and Torchic I guess would be cute, but most definitely not cool like Swampert. Anyway, if you want a Pokémon that can absorb a hit and dish it out right back while looking super cool, the only Pokémon to choose would have to be Mudkip.

I remember when Professor Birch asked me to pick a Pokémon 10 years ago, I had trouble deciding which one I wanted. I was too young to be immediately exposed to their final evolutions, and all three of the options looked kind of weird.

Did I want Mudkip, the weird frog-looking thing? Or did I want Treeko, the wet dream of every kid who was into reptiles just a little too much? Though I appreciate that they looked way different from previous starters before, I actively wanted neither of the two and eventually went with Torchic, because it looked like it was going to eventually allow me to fly places.

At first, I wasn’t too keen on it. It looked the least masculine and its moves were, as expected, that of a flying and fire Pokémon put together. My thoughts slowly changed when it evolved into Combusken, AKA what happens when Bruce Lee is fused with a chicken. I could tell this thing was never going to learn Fly, but the slightly boring flying moves turned into more exciting, more powerful fighting moves, and my Combusken began wrecking Pokémon left and right. The idea of a fire/fighting starter may be a tired concept now, but when it first became a thing in these games, it was a match made in heaven.

This was especially the case when Combusken turned into Blaziken at Level 36. Torchic, who started as the best of a bad situation, turned into an insane pro-wrestler who could master fire and fighting moves, ultimately culminating in Sky Uppercut, Blaziken’s (in my imagination, anyways) signature move.

Today, some of you may see Blaziken as the weird tournament-banned starter Pokémon. Others may think of Blaziken as the guy whose Mega Evolution we’ve known for the past year. But I see Omega Ruby and Alpha Sapphire as a new opportunity; one where I can relive the magic of having Torchic as a starter while, at the same time, finally giving him the respect he deserves.

So after playing the demo what are your thoughts about which Pokémon you will start with? Have we persuaded you to pick a particular one? Let us hear abut it in the comments section below!

You misspelled treecko in the title.

Green > every other color! That's the only method I use when picking starters.

You misspelled treecko in the title.

Fixed! Thanks for pointing that out.