The entire Wrecking Crew fanbase expresses his love for an NES launch title.

Wrecking Crew is one of those games that happened before Mario was Mario. Super Mario Bros. had been released, but the character was still far from established. What this means is that we aren't saving the princess, we aren't fighting Koopas, and we aren't even plumbers. In this game, Mario is part of a demolition squad with Luigi (in two-player only) trying to destroy constructed efforts (I can't call any of these things 'buildings'), despite attacking eggplants and the worst foreman to ever live. It's a game many people have either heard of or tried, but most people I talk to about it can't get into it because of how complicated and weird the game is right from the get-go.

I'll admit something to you. This game is really weird. Even if Wrecking Crew holds a place in my heart, I am still kind of confused about how it works. I mean, on paper, a game called Wrecking Crew should be an action game about the brothers using their hammers to destroy enemy strongholds. What we're left with instead is an action-puzzler about jealousy and dinosaur wrench attacks. 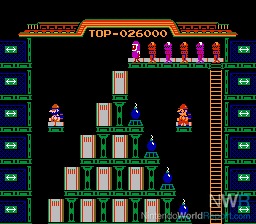 For those of you who have the game via the Ambassador promotion or as a ROM in the depths of your computer, I'll try to spell out it for you. In Wrecking Crew, you play as Mario, tasked with destroying all of the level's various objects (like brick walls or ladders) with a trusty hammer while avoiding dinosaur wrenches (named Gotcha Wrenches), eggplants, and a guy named Foreman Spike. Spike is jealous of our hero's destructive skills, and takes it upon himself to hinder Mario at any chance he can get. This man is perhaps an even bigger jerk than the dog from Duck Hunt. In advanced levels, you must be careful to only destroy ladders once they are of absolutely no further use, as levels become unbeatable if there are objects to be destroyed and no ladders to access them. With Spike, ladders are destroyed BECAUSE he knows that he can destroy it to hurt Mario. Because Spike only destroys ladders once you are on them, you have to manipulate routes to reach objects that need to be destroyed so he can't catch up with you. And if he finds himself on the opposite side of a brick wall, you can swing your hammer through it and smack the unionized piece of crap off of six flights of construction.

Though many compare Wrecking Crew to Donkey Kong, the similarities are in basic mechanics only. There are girders and platforms to climb on, everything kills you if you touch it, and no enemies can be killed unless you find a really special hammer. You know something Mario can't do in this game? Jump! That's right, Jumpman can't jump! Imagine the original Mario game without the A button enabled. That first Goomba would now be every single enemy in Wrecking Crew. Because of this, Mario is completely reliant on climbing ladders or falling correctly to get to tricky areas. And, like I said, if you destroy a ladder before everything above it is destroyed, the level can not be completed and must be reset. Thankfully, all 100 levels are available for selection as soon as the game is booted up.

One more thing I wanted to talk about was the classic hammer that Mario hits stuff with. Wouldn't it be great if Mario could hit nothing with his basic hammer? The hammer Mario is given is strictly for demolition; enemies can be tricked, stunned, and trapped through scenery manipulation with it, but no enemies can get destroyed as a result (only with a special golden hammer can enemies be damaged by Mario directly). 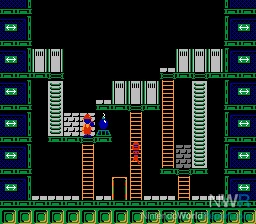 Let's recap. We have a Mario game without jumping or the ability to hurt enemies, weird puzzles that take all of the harmful stuff out of Donkey Kong but none of the fun, and a foreman who can prevent levels from being completed. How can anyone like this game? The thing I need to convey about this game above all else is the weird adrenaline someone can get while playing it. What this game does is force the player to think on their feet in a way they don't usually do. Normally, if you're playing Mario and want to avoid a goomba, you just jump over or hop onto a platform above it and continue scrolling along the level. This game quickly throws five to ten slow, invincible enemies which need to be avoided within one screen. Meanwhile, each door, brick wall, ladder, and bomb is just another task which needs to be completed while all of this is happening. The only tools on your side are climable ladders, doors which briefly trap enemies, and exiting one side of the screen to bring you out of the other side.

To get good at Wrecking Crew, you need to be able to observe surroundings to an astounding degree as well as plan, alter, and re-plan routes to destroy objects at a moments notice. The game is hard, but it is one of the few puzzle games which manages to excite me while offering a greatly satisfying feeling upon each concluded level. And without any passwords necessary to continue, there is absolutely no pressure to succeed in a level other than a high score. Because all of the level designs are so well-crafted, the game proves to be quite lengthy. I'm at level 45 on my ambassador playthrough, and my 3DS playtime reads at over four and a half hours. 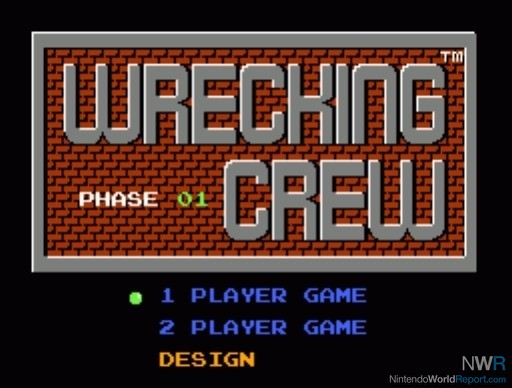 A big part of Wrecking Crew was "Design", a feature allowing the player to create up to four levels with every single item, enemy, and piece of scenery available (similar to Excitebike). Although the game has saving and loading options, these options were designed for the Famicom Data Recorder (released only in Japan). As someone who spent up to two hours designing masterpieces, the game also provided one of my first rage-quits, when all of my hard-earned data disappeared even after saving (in other words, the game pulled a Pokemon Silver on me). Luckily, those of us with either of the virtual console versions have the save features re-enabled, and can enjoy the creation features without fear of deletion.

I'm recommending that you all play this game not because it's the greatest game ever (although it's part of my NES top ten), but because I fear many have ignored it or skipped it because of how confusing and convoluted it appears. I've played few puzzle games more inventive, more original, and more engaging than Wrecking Crew. It's one of these titles that makes you want to complete just one more puzzle -- seven times in a row. It's kept me on the edge of my seat for over an hour at a time, and if you give this ten levels of serious effort (though I recommend fifteen), I swear that a few of you may be quite surprised at how much you never knew you could enjoy a game like this.

I had heard of this game as a child, but never got around to playing it. I got it as an Ambassador Game and I have enjoyed it, it is not my favorite game, but I am glad they released it. I will say I was very confused because I did not realize that the ladders could be destroyed and I could not figure out for the life of me why the level would not end.

Well, I should specifically mention the silver ladders are the breakable ones. The yellow ones can't break.

Also, here's a tip I never fully explained in the article: pressing A at the title screen changes the level (or "phase", which you can see next to the game title) to the next one above it (ie phase two becomes selected if you press it once), and pressing B changes the level to the one below (though pressing B while phase one is selected pushes it all the way to 100)

The Golden Hammer music is so good :cool;

Hey, I'm a proud member of the Wrecking Crew fan base too! I have proof!

I love Wrecking Crew and really wish they made a true sequel to it. (Project H.A.M.M.E.R. doesn't count.) There is a ton of gameplay and anyone that actually finishes all the levels definitely deserves respect.

Imagine Retro doing Wrecking Crew Returns for the eShop...I would probably put 10 dollars down for another 100 levels, especially with GCN level graphics and the sweet 3D.