The obvious and not-so-obvious details of the X and Y trailer.

By now, everyone's sure to be buzzing like a Beedril with the reveal of Pokémon X and Y. The games look amazing, and come October this year, the world will be back in the firm grip of Pokémania once more.

Much was revealed during the short teaser, but there's much more we can take away from the video than just what was said by the narrator. I've gone over the trailer with a fine-toothed comb, and come up with both a list of features that we can confirm, and a couple of theories that may come from reading too deeply between the lines.

Be warned, I get a little wordy as per my usual essay-mode ranting and raving. Hence the decision to put this up as a blog. Let's begin our analysis, shall we? 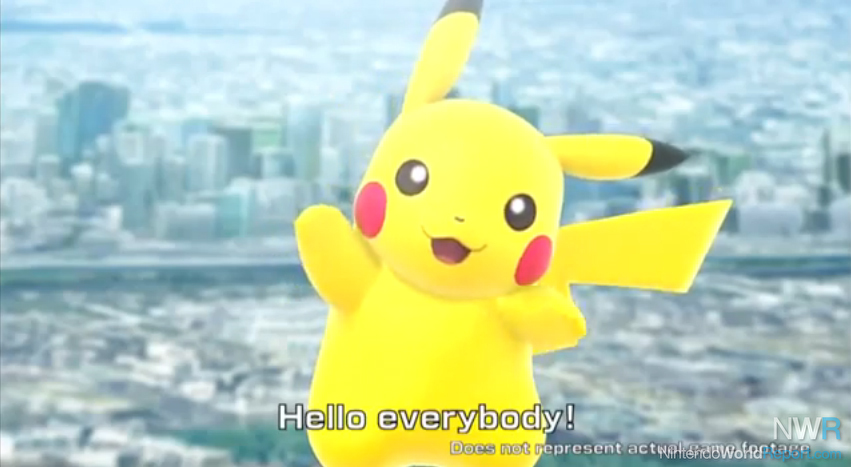 Before the trailer begins, everyone’s favorite little yellow zap mouse, Pikachu, greets us. Through the magic of Poké-human subtitles, we learn he's about to reveal some big news, which comes in the form of a Pika-powered radio transmission sent from atop the Eiffel Tower. What an odd choice of location. Judging by the architecture of the buildings seen in later city shots of this new region, not to mention the large, picturesque monuments (including a spire-like tower not unlike the one Pikachu is precariously perched atop during this segment), it may be safe to assume this new region is at least partially inspired by France. Will other neighboring European locations get the homage treatment in the new game as well? I'm sure we'll find out soon. 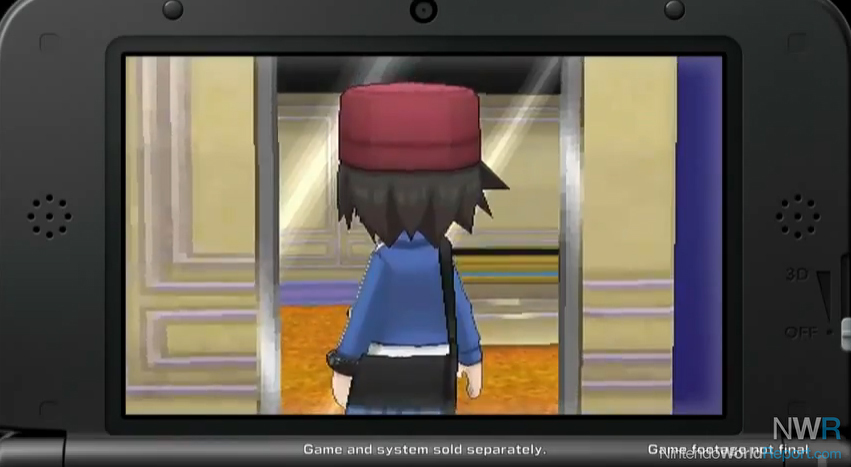 The in-game footage then begins with a close-up shot of a male Pokémon trainer from behind, as he haughtily analyzes his appearance in a full-sized mirror. Instantly, it's apparent he is rendered with a fully 3D model rather than a 2D pixel sprite—a first for the series. It's also clear that the trainer avatars in this game are much less "chibified" (i.e., short limbs, gigantic heads and eyes) than in generations past, with realistic proportions more resembling the pixel artwork you would see in battle scenes in the past. There have been plenty of reflective surfaces in past Pokémon games, but the inclusion and direct focus on a mirror of such size seems to hint at some degree of character or outfit customization as well. If this turns out to be true, the feature could be a huge turning point for the series. 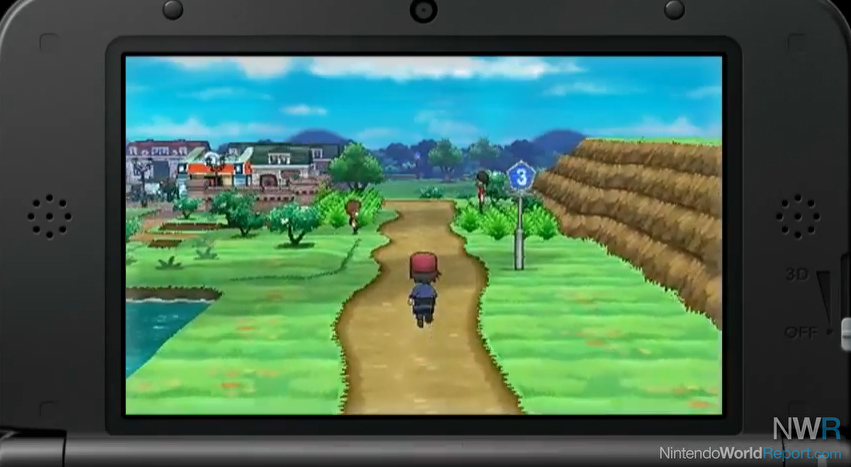 "Discover a breathtaking 3D world..." the narrator begins, as we see a shot of the same trainer running along an outdoor path. The usual Pokémon staples are seen; trainers wait on either side of the path to ambush passersby for a battle. Around them, tufts of long grass rises up from the soil, inviting you to go rustling through the foliage in search of wild monsters to battle and catch. A town can be seen to the left in the distance, with what appears to be the telltale red roof of a Pokémon Center ready to open its doors to battle-weary trainers. The big change in this shot is that the camera is situated behind the player's back, rather than hovering in a top-down view, making the world appear much closer. It's going to look great in 3D as the passing trees and cliffs stretch out around you. 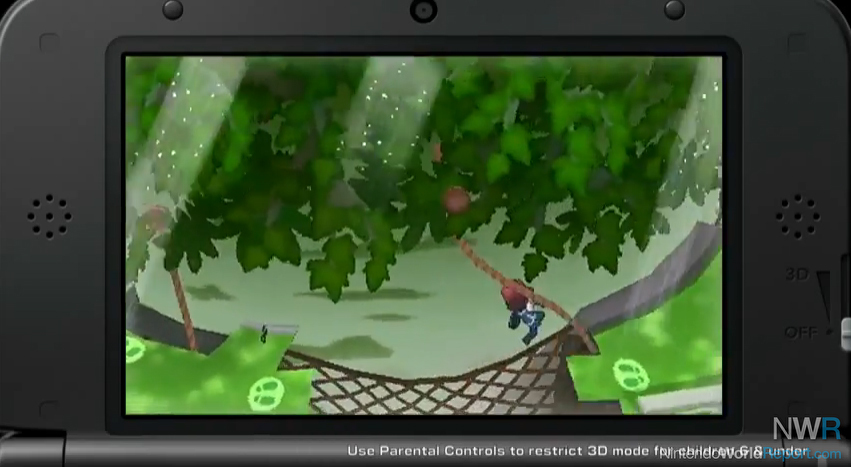 We then see a shot of the trainer traversing a circular path around what looks like a huge tree stump, leaping and grabbing at vines hanging overhead to swing across gaps in the trail. Could this be a sign of a more adventurous Pokémon journey this time around? If you ask me, it merely looks like the kind of gimmicky obstacle attractions you would only see in a Pokémon Gym, but if stuff like this were to appear in the main world, I'd be thrilled. 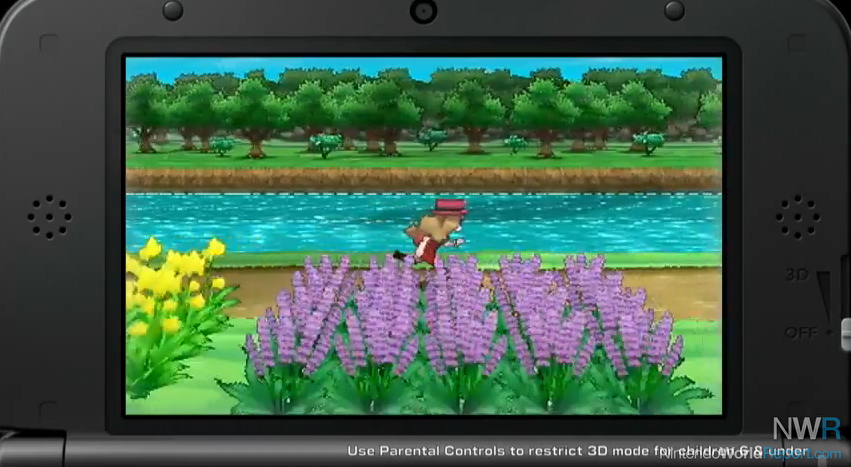 Next, we cut to a girl trainer running along a riverbank with rows of flowers arranged neatly in the foreground. We can't clearly see the trainer's face or any particularly noteworthy elements of the scenery to suggest new features, though the trainer's running pace is quite impressive, and I suspect players will have that B button constantly held throughout the adventure. From this and the previous scene, we can also confirm that, much like in Black and White, certain locations will have certain camera angles locked in place to showcase particularly nice scenery or show off the scope of the world. Again, those flowers in front are perfect 3D fodder to show off the 3DS's visual capabilities. 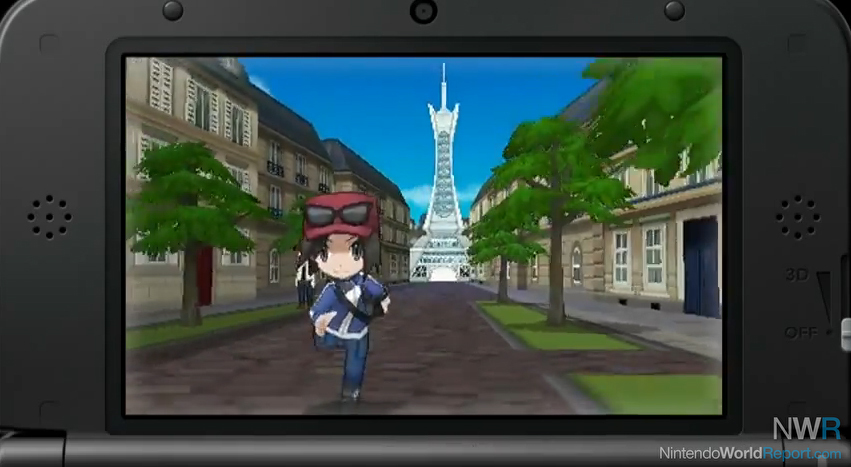 The male trainer appears again, roller-skating toward the camera as it zooms backward down a city street, with the Pokéiffel Tower (if it's called that in the game, I'll eat my 3DS) standing proudly in the background. Yep, roller-skating. Will bicycles appear in this game? If the region is French inspired, probably. It will be interesting to see what new terrain navigation abilities the skates add to the game, and how they differ from other modes of transportation. 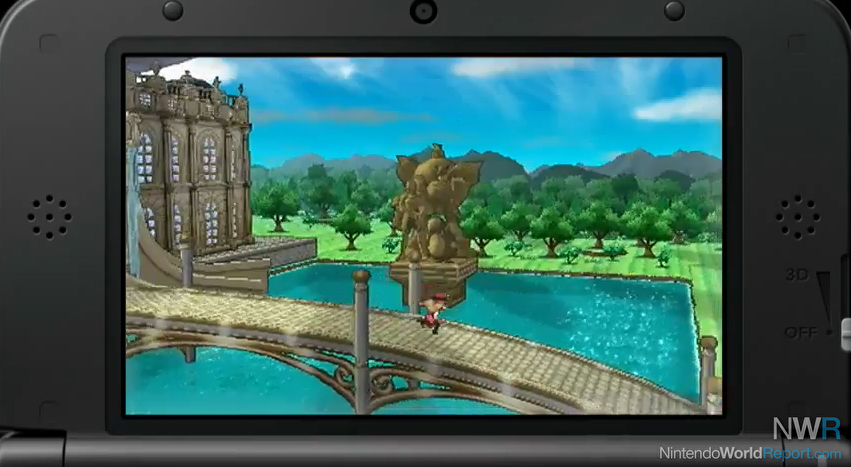 Two more panning shots of outdoor environments are seen. The girl runs along a quaint little bridge leading away from what looks to be a museum with a large sculpture of a trainer and some unidentifiable Pokémon in the background. The boy overlooks a huge sprawling canyon with a city of futuristic domes elevated high above the rocky floor. Clearly there will be much to see and discover in this new world.

Finally, we get our first look at the three new starter Pokémon: Chespin, Fennekin and Froakie—grass, fire, and water type, respectively. We've all seen their pictures, and they look adorable, yes. But for this feature, I'm focusing on what wasn't said directly. 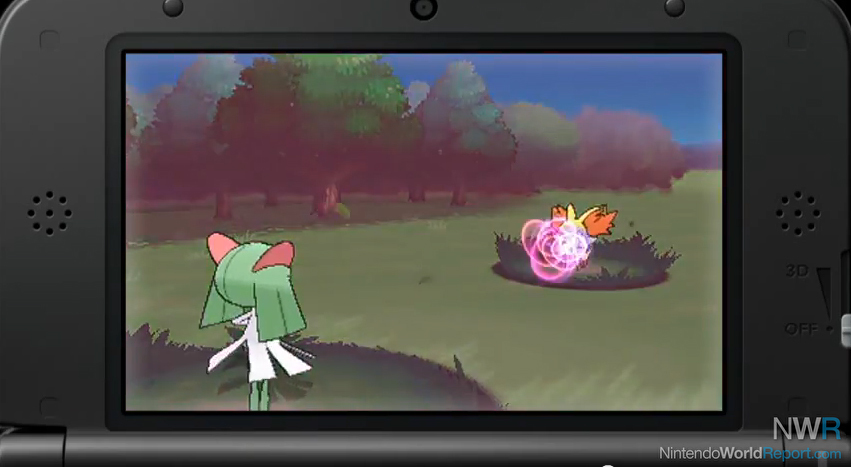 Long before Iwata confirms it in the post-trailer explanations, we see these three starter Pokémon battling against opponents from older generations. The battle screens of old have been scrapped in favor of a new alternating 3D perspective similar to the one used in Pokémon Stadium so many years ago. All the Pokémon are rendered in 3D using glorious cel-shading and polygon outline techniques, and for the first time in a main Pokémon title, the creatures look exactly like their anime counterparts. The use of 3D sprites also allows realistic movement sets for each and every creature—they can frown with determination or wince when they're hit with attacks. There's so much more expression seen here than ever before. 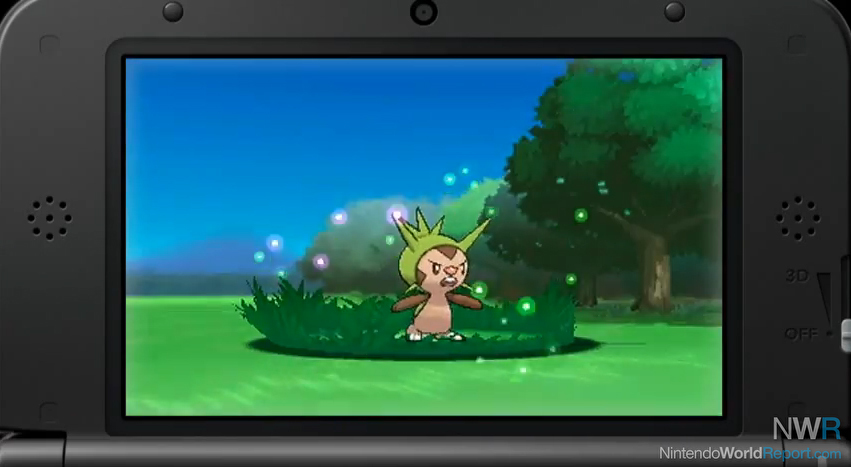 The battlefield is represented by two little patches of terrain the Pokémon stand on, from which they fire attacks at each other. A 3D background representing the current location surrounds them; in the trailer, it was a grassy plain. It's reminiscent of recent entries in the series, but reinvented in a great new way. What might not be immediately noticeable, however, is that as a gentle breeze blows to rustle the grass, we see little sheens of light travel across the ground from one side of the arena to the other. It's a nice visual effect to keep things from being boring, but what if it had a practical use? We've had other environmental effects used to throw a wrench into the battle mechanics before—torrential rain, sandstorms, blizzards, etc. Wind direction could effectively change the entire way a battle needs to be strategized, as certain attacks could be more or less powerful depending on the force and direction the wind is blowing, or possibly even blow back and hit the Pokémon that performed the attack! 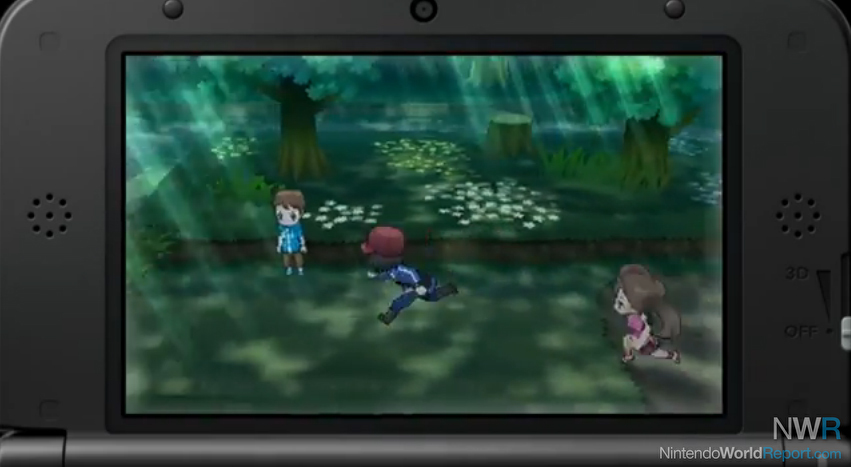 Next, we see a dense and shady forest area with a unique twist. The male trainer from before dashes about the winding paths, but he's followed a few steps behind by a female trainer, running in a slightly different path than the one he takes. She doesn't appear to be the trainer seen earlier in the trailer, as she's wearing a completely different outfit; then again, the male trainer doesn't appear to have the sunglasses on his hat that are seen at the beginning either. We can make two estimates from this footage—the customizable trainer models might be a done deal, and, more importantly, there may be some form of two-player co-op mode allowing friends to journey together across this new land. Or it could just be a side quest where you lead a girl through the woods. I hope not. 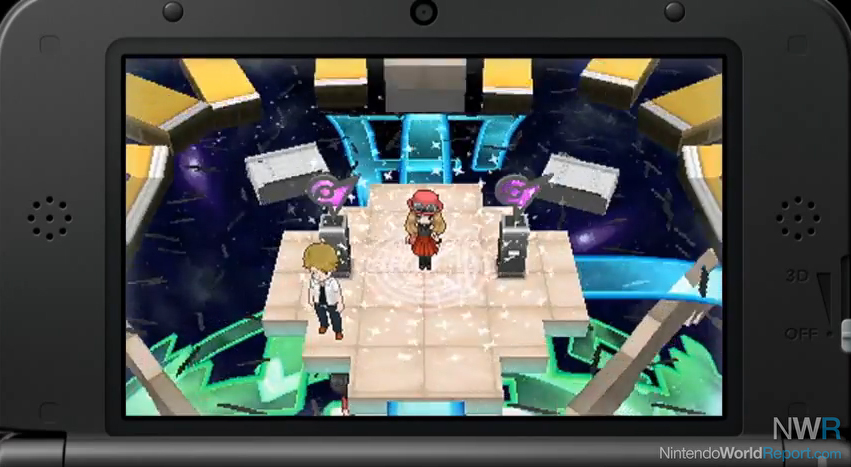 A few more scenes flash past, showing a wild Pikachu appearing in battle, what looks like a Pokémon Gym (judging by the logo on the signs) appearing out of a virtual reality simulation as chunks of the room fly about and form around the player, some more old-generation Pokémon battling each other, and the male trainer bouncing on a gigantic spider web in a treetop area full of log platforms. The last piece of footage shows a large arena with giant fountains of flame spouting through holes in the floor, possibly part of an Elite Four stadium.

Finally, some pre-rendered sequences that “do not represent actual game footage” tease at the legendary Pokémon X and Y, recently confirmed to be named Xerneas and Yveltal. It's quite clear these two will be the main featured Pokémon on the box art for the two games.

Well, there you have it. Hopefully I've provided some food for thought and pointed out some stuff that wasn't immediately obvious. Check out the gallery below for more pictures, or of course, if you haven't seen the trailer video yet, go check it out. If you see anything I've missed or have any theories of your own, feel free to let us know in the Talkback thread below.

Spouting Flames means KISS will be the Elite Four.

Spouting Flames means KISS will be the Elite Four.

If that means battling with "Detroit Rock City" blaring in the background, I'm all for it.

Also, the sunglasses coming off in the vine-swinging scene means the protagonist can't deal with it.

I'm certain exploration will be no more interesting then it has ever been, and the battle animations will get just as boring as the stadium type games.

Good thing I love the Pokemon, catching, breeding to perfection and the actual battles or I would never have anything to do with the game.


Nice catch on the sun glasses by the way. I didn't expect a lock of player customization.


Add to the discussion!